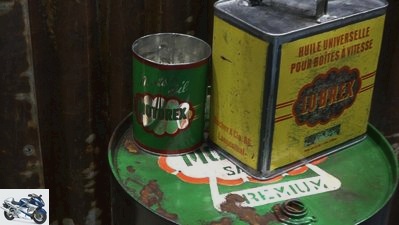 100 years of Motorex
A trade fair appearance for a birthday

The Swiss company Motorex is celebrating its 100th anniversary at EICMA with a small exhibition from its history.

The foundation for Motorex put the businessman Arnold Bucher in 1917 in Butzberg in the Swiss canton of Bern.

He produced and sold care products for leather and wooden floors.

1938 the company was in Bucher & Cie AG renamed; In 1944 it moved to Langenthal, where it is still based today. The largest tank farm in Switzerland was built there in 1974 when Bucher AG set up base oil tanks directly at the company’s headquarters in Langenthal.

The brand name Motorex for engine lubricants and cleaning agents has been around since 1947, the green logo with white lettering used today was born in 1990.

More about the company anniversary is under 100-years-motorex.com to see, hear and read.

Marketing manager Rolf Wassmer also explains the specific focus of Motorex in the video and answers the basic question of why oil is not the same as oil, why not even 10W40 is the same as 10W40.