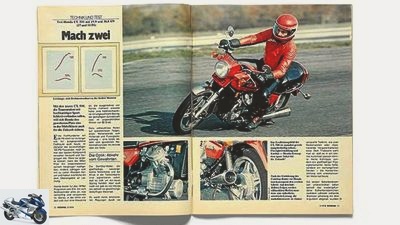 The modern age suddenly came: two-cylinder with water cooling, H4 light, double disc on the front wheel. In addition, tubeless tires on light alloy rims, cardan drive and all heavy components arranged around the center of gravity according to the principle of mass centralization.

That’s how motorcycles are built to this day. But: It’s 1978. And long before this motorcycle was ennobled to a slurry pump and then a collector’s item, MOTORRAD tester Franz-Josef Schermer was one of the first to test the CX 500.

The modern age suddenly came: two-cylinder with water cooling, H4 light, double disc on the front wheel. In addition, tubeless tires on light alloy rims, cardan drive and all heavy components arranged around the center of gravity according to the principle of mass centralization. That’s how motorcycles are built to this day. But: It’s 1978. And long before this motorcycle was ennobled to a slurry pump and then a collector’s item, MOTORRAD tester Franz-Josef Schermer was one of the first to test the CX 500. One of his first observations: “You sit on it and feel good.” The seating comfort, knee angle and instrument arrangement are convincing, and the engine layout also shows the well thought-out concept: Where Guzzisti bruises his knees, the Honda cylinders are turned 22 degrees to the crankshaft. This means that the extremities do not come into contact with the hot engine and the carburetors disappear under the tank. With its irregular firing order, the V2 exudes a little Italian flair, but is mechanically much quieter due to the water cooling. This also applies to the unobtrusive pouting from the exhaust. At that time, the tester had no idea of ​​the proverbial reliability. Nor that many motorcycle couriers – especially the English ones who were said to have the toughest job on two wheels – should soon switch to the CX in droves.
With a top speed of at least 183 km / h lying down, the Honda is one of the fastest in the 50 hp class, and also offers usable thrust over a very wide speed range. Schermer illustrates this with an experiment:
He drives through the same curve with round
92 km / h in second, third and fourth gear, time and thrust differences are hardly measurable. However, the 80-degree V2 does not turn out to be a food contender: 7.5 liters of test consumption are not made of cardboard.
Schermer is impressed by the balanced driving behavior. The longitudinal crankshaft reduces drive influences to a minimum, the clutch rotating in the opposite direction saves a balance shaft. The cardan also remains inconspicuous, the elevator effects are much milder than with the BMW. Another highlight: the easy-to-dose and powerfully gripping brakes, at least according to the standards of the time. Until then, journalists at Honda brake systems were not used to such determination. Several testers lay on their noses at the presentation in Nogaro, France.
Schermer describes the chassis as comfortable, but the fork damps too weakly. When it comes to tires, the CX has a pioneering role: it is the first production motorcycle with tubeless tires. A matter of course today, it was a not inconsiderable security gain back then. Without a hose, no valve can tear off, and in the event of a defect, the air escapes slowly and no longer suddenly.
The 27 HP version, which has been throttled especially for the German tier driving license, is also put to the test. Other carburettors and reducing sleeves in the exhaust constrict the engine, the weight of 227 kilos with a full tank does the rest: the clogged Honda doesn’t even drive away a Zundapp KS 175 with 17 hp. It is hardly more stingy with the fuel than the open version, in the test it still pulls seven liters per 100 kilometers through the carburetor.
Schermer strongly recommends the 50 hp variant, especially since it costs as much as the throttled one.
The open CX from Schermer only has to take criticism for its plump shape. Citation: “Never before has there been a motorcycle from Honda that took so much getting used to.” In the end, however, the MOTORRAD tester relativized his judgment again: “As ugly as the machine looks, it drives so well.” Which says everything.
While “Starwars” conquered the canvases, also takes hold Yamaha At the beginning of 1978 for the stars and presented two new products in the Senegalese capital Dakar. The first is called the XS 1100, is the largest large-scale production machine at the time and still offers a lot of superlatives: The fattest series tires at the time, size 3.50-19 at the front and 4.50-17 at the rear, as well as the largest brake discs, 298 mm at the front and rear. Here, too, MOTORRAD tester Franz-Josef Schermer is on site and drives the machine to the test. He certifies that the 283 kilo heavy steamer has the best pulling power and stable brakes. On the open road, the XS can be accelerated smoothly from 2000 revs upwards in top gear and runs over 200 things, the handiness and stability give Schermer no cause for criticism. Only in the city, he states, “the machine drives a bit rocky”, which comes from the full 24-liter tank and the correspondingly high center of gravity. His conclusion: huge, but good-natured.
The second arrow that Yamaha pulls out of its quiver in Senegal is to become one of the brand’s most successful models: the SR 500. The often overused phrase from “rustic stew” Has never been a better fit than this anachronism in a time of galloping high-tech developments. While the big manufacturers are throwing superlatives at each other, Yamaha brings the minimalism concept of the XT 500 – one cylinder, one carburetor, one camshaft and two valves – onto the road. The result: a full tank of 170 kilos, disc brakes, decent chassis and a full thump from below. the SR 500 is a direct hit that goes away like sliced ​​bread and is enriched with careful model maintenance until 1999 Yamaha’s program; Because retro was already popular back then, Franz-Josef Schermer knew that too: “Not least because nostalgia in contemporary packaging appeals to a constantly growing group of customers, dealers can look forward to the SR 500.”
The average earner brings home 2187 marks gross: 8688 marks costs the cheapest 1000 cc machine: Honda’s GL 1000 K31485 marks per year costs 100 percent liability for a motorcycle between 28 and 50 hp with the cheapest insurer

January 19 The last German-made VW Beetle with chassis number 1.182.034.030 rolls off the production line in Emden, Lower Saxony. In the color “Dakota beige”.February 10th The most successful film of the year comes to the cinema: George Lucas ?? “war of stars”. Land in the end “Two cannot be stopped” with Bud Spencer and Terence Hill and “Grease” with John Travolta and Olivia Newton-John in second and third place. April In the USA, the television station CBS broadcasts the first episode of the television series “Dallas” the end. The series about Fiesling J. R. Ewing becomes the world’s most successful soap opera of the 80s
Years, runs until 1991 and has 357 episodes at the end. The film was the model for the series “Giants” with James Dean. 24. April The song “Rivers of Babylon” von Boney M. reached number one in the charts, stayed at the top for a total of 17 weeks and thus became the most successful single of the year. The soundtrack to the film is the best-selling album of the year in Germany “Saturday Night Fever”.May 3rd The DEC employee Gary Thuerk goes down in computer history as the first spammer. On May 3, he sent an unsolicited e-mail to 400 users of the American Arpanet, the military part of today’s Internet, with which he offered accessories for the minicomputers of the “Digital Equipment Corporation” (DEC) offered. This means that the unwanted advertising messages are already 15 years older than the Internet itself. May Reinhold Messner and Peter Habeler are the first to reach the summit of Mount Everest without an oxygen device. Three days later, Reinhard Karl, a participant in the same expedition, was the first German to climb the summit. June “Mike The Bike” Hailwood wins the Tourist Trophy on the Isle of Man on a factory Ducati 900 SS after an eleven-year break from racing and becomes TT-F1 world champion at the age of 38. However, his comeback is overshadowed by a total of five fatal accidents during the TT.
June 19th Garfield, the “fat, lazy and philosophical” Kater by author Jim Davis, appears for the first time as a comic. Today is “Garfield” the most widespread comic strip worldwide and is up to mischief in over 2500 newspapers. 21. June At the soccer World Cup in Argentina, the German team suffers as the reigning world champion “Shame of Cordoba”, it is beaten 3-2 by Austria in the second final round. The Austrians refer to their triumph as that “Miracles of Cordoba”, because they defeated the Germans for the first time in 40 years. Argentina won the final against Holland 3-1 after extra time. August 26th Albino Luciani succeeds Pope Paul VI. elected and takes the name John Paul I. He dies after only 33 days in office. His successor, Karol Wojty? A, went down in history as John Paul II. Before that, there was a tri-papal year like 1978 in 1605. September 3rd Sigmund Jahn and Valery Bykowski return from space. On August 26, the two took off for the Salyut-6 space station as part of the Interkosmos program. This makes Jahn the first German in space. September 10th At the Italian Grand Prix in Monza, Mario Andretti secured the Formula 1 World Championship early on a Lotus 79. The triumph is overshadowed by the death of his friend and teammate Ronnie Peterson. November In Jonestown, Guyana, orders Jim Jones, the leader of the US sect “People’s Temple”, suicide his followers. With over 900 victims, it is the largest mass suicide in history. Members of the sect who refuse to drink the juice containing cyanide are shot dead. Jones is also found with a bullet in his head. Whether he killed himself is open.