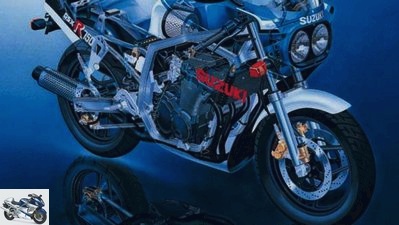 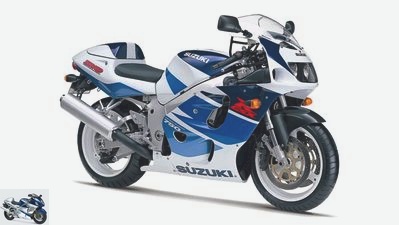 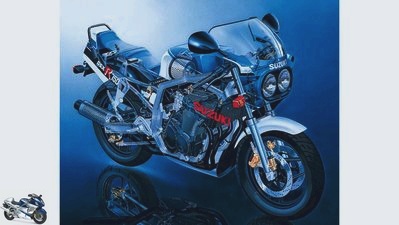 2/14
The ancestor: In 1985, Suzuki brought the GSX-R 750 onto the market. Never before has there been a machine from Japan designed so radically for racing technology.

Thanks to special oil cooling and lightweight aluminum chassis, it weighed only 201 kilograms with a full tank, a good 40 kilograms less than the competition. 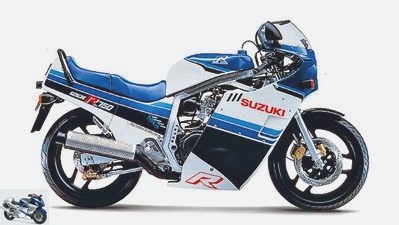 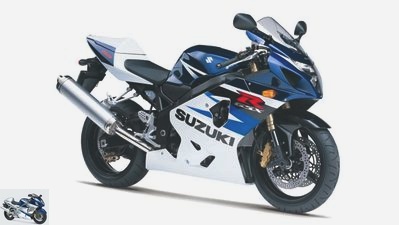 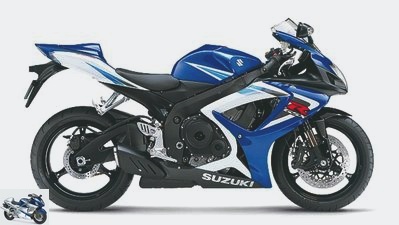 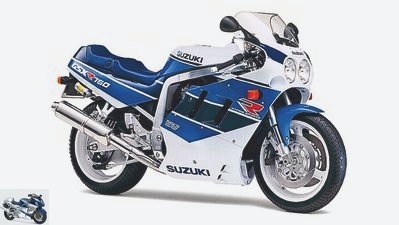 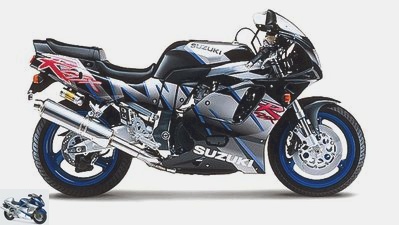 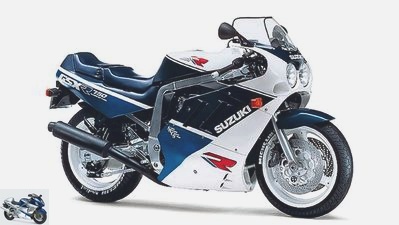 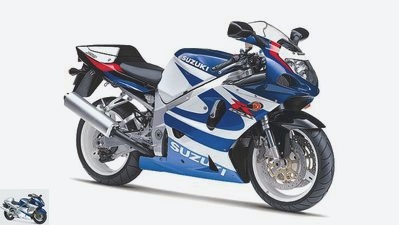 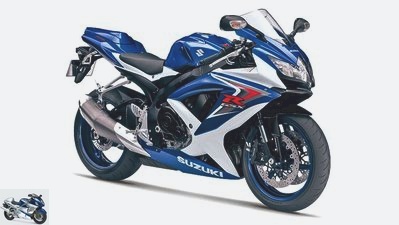 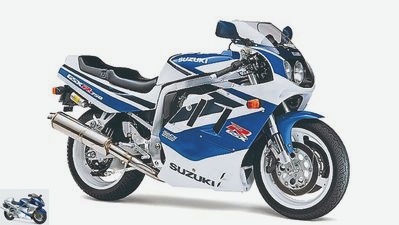 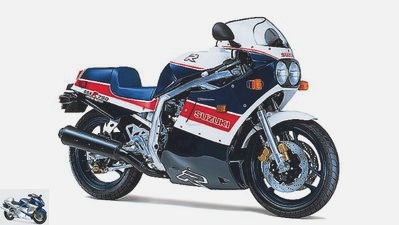 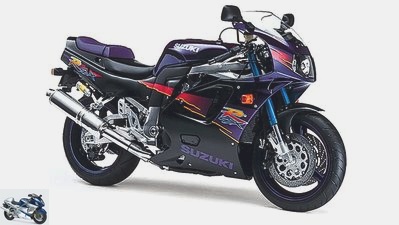 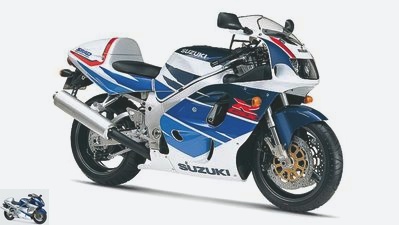 Final: 25 years of the Suzuki GSX-R 750
Mother of all Gixxers

25 years ago Suzuki put a groundbreaking sports motorcycle on the road: The GSX-R 750 was the lightest and at the same time one of the most powerful 750s of all time.

Unfortunately, I’m only in my 23rd year of work. That’s how I was a reader back when the first GSX-R 750 hit the market. Just like you, who are now holding this issue of MOTORRAD in your hands. So I can only offer first-hand test experiences with the original transfiguration from the 88 version. And – I have to admit to my shame – I didn’t drive the original first version a meter. Until now. Maybe one day an owner of this machine, which has now become very rare, will let me ride a few kilometers with his sweetheart. He would be certain of a story.

1985 was a tough year on the motorcycle scene. Because not only Suzuki impressed with the 100 hp GSX-R, Yamaha also had a hot iron in the fire with the five-valve FZ 750. Racing fans, however, were enthusiastic about the ultra-light Suzuki. The 40 kilogram heavier Yamaha was within the usual weight range of the time. What else was there in this class? Well, a 91 HP weak Honda CBX 750 F and a barely stronger Kawasaki GPZ 750 R. I devoured the MOTORCYCLE comparison test immediately after it appeared. The two-part test in issues 6 and 7/1985 was ultimately won by the cultivated Yamaha, just ahead of the uncompromising Suzuki.

Final: 25 years of the Suzuki GSX-R 750
Mother of all Gixxers

How did Suzuki manage to distance the rest of the world so much in terms of weight? Extremely lightweight construction for all parts and the omission of unnecessary ballast was the motto. Suzuki, for example, deliberately avoided weight-inducing water cooling and opted for combined air / oil cooling. Two oil pumps, 6.5 liters of lubricant and a large oil cooler were enough to control the temperature of the engine. On the chassis, Suzuki tried aluminum. But the filigree tubular frame, welded from cast parts and extruded profiles, was really light, but not particularly stiff. Over 200 km / h the 750 wobbled alarmingly, only the revision for the 1986 season with a longer swing arm and better tires ensured more calm.

My first GSX-R was the 88 version – the much tamer and heavier one that made it forget all the weaknesses of the predecessor. No more commuting, great carburetor set-up, much better fork, 17-inch wheels. Actually a dream. On the first test drive on the Nurburgring-Nordschleife, however, the disillusionment came quickly: a little too little ground clearance, so a lot was sanded down. And the even shorter-stroke engine pulled through very weakly. At the top, the four-wheeler, equipped with 73 millimeter pistons, marched no better than the old one. Logical step: back to the old stroke-to-bore ratio. The 1990s version found its way back on the path of athletic virtue. Stainless steel four-in-one system, upside-down fork, fat 170 tire, you were well dressed with that. And the machine, which weighs at least 226 kilograms with a full tank, was also very neutral and stable. That should hardly change in the next few years.

Strange: If the BMW S 1000 RR is celebrated today because of its rocker arm, one forgets that the 91-GSX-R 750 also had one in the cylinder head. Before that it was fork rocker arms. With the 92 version, Suzuki ushered in the age of water cooling and bucket tappets for the GSX-R, its weight rose to 239 kilograms. And that despite the fact that Honda came onto the market with the first Fireblade and was aiming for the 200 kilo limit. The nimbus of the best in class when it comes to lightweight construction was finally history. Until 1995 the W models could be moved quickly on the racetrack and were blessed with a really great ground clearance, but the paper form spoke against them.

A new bike was needed. In 1996 the time had come. The completely new one GSX-R 750 set an example. 128 PS strong, with a bridge frame modeled on the Grand Prix racers, a characteristic rear fairing and performance-enhancing Ram Air inlets at the front. This is what the fan base had been waiting for. And finally the GSX-R was again one of the fastest in the country. I still remember a 200-kilometer orgy from Stuttgart to Nuremberg. The engine turned over 13,000 rpm without any problems. Up until then, only 600s were capable of such speeds. And not only once did I see the 280 km / h shining on the speedometer – madness. On the racetracks you were again among the fastest and you didn’t have to fear any opponents. Just two years later, Suzuki followed suit with the injection version, which was supposed to produce an eerie 135 hp. But this had a hard time in the supersport segment, because the Yamaha R1 was launched at the same time. Honda also set its focus on the further development of the Fireblade, which will soon be 1000 cm3, and so the 750cc Suzuki was badly behind. 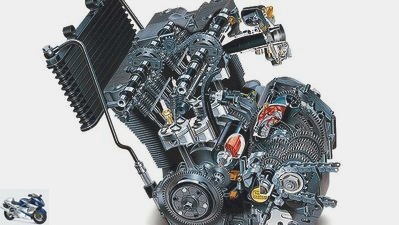 One of the most beautiful four-cylinders and one of the most built engines so far: Suzuki’s finest-ribbed air / oil-cooled inline quad for the GSX-R 750. 100 hp, light, easy to turn and robust.

In 2000 came the defiant reaction. 141 PS strong, with a new chassis, new engine and incredibly light: only 191 kilograms with a full tank. The new GSX-R 750 was the lightest sports motorcycle with over 125 hp. The engine, once again designed with a slightly shorter stroke, turned up to an incredible 14,000 rpm. What nobody suspected in 2000: Suzuki developed a violent 1000 with a very similar look and technology to the 750. This 160 hp racing machine was the 750’s strongest competitor from 2001 onwards. Especially since the almost identical 600 was nibbling at the sales figures from below.

2004 can be described as the best in the GSX-R program. The 750 was revised again. Titanium valves ensured high speed stability. The sisters GSX-R 600 and 1000 were similar to the 750. Everyone drove really great and powerful. From 2005, the 1000s went their own way again and gained quite a bit of breadth. So it was left to the 750 to preserve the sporting honor. In 2006 and 2008 it was again significantly revised. They even returned to the very first stroke-to-bore ratio of 48.7 / 70 millimeters – and still found speeds of 15,000 rpm. But the 750s couldn’t match the great times of the 80s and 90s. The 1000-cc superbikes are too dominant these days.

What has happened in those 25 years? The current GSX-R 750 does exactly half more than its ancestor. And weighs pretty much the same. After all, in 1985 customers had to hand over 13029 marks for a brand new Suzuki. Today it costs € 10990 as the best-price model in the 2008 version. 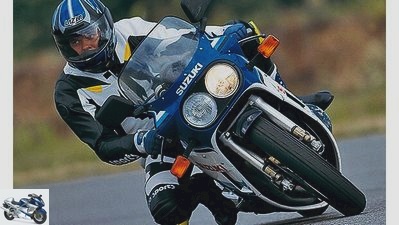 Will there be another quantum leap like this in sports motorcycles? I do not think so. The BMW S 1000 RR is currently setting the performance bar at 200 hp. Where else do you want to go? And aiming for significantly less than the magical 200 kilograms no longer makes sense with today’s engine power. After all, you need a lot of electronic helpers to control this power and to keep the whole thing in check.

It will be interesting to see what the manufacturers will come up with. If I could wish for a new GSX-R 750, it would find its way back to the roots a bit. With the beautiful, finely ribbed engine, a thick oil cooler, the double headlights and a robust sounding four-in-one system. With contemporary components a great driving experience for sure.