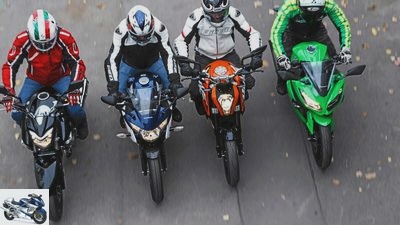 Small motorcycles have never looked so great. It’s high time to take a look around the league of 250 and 300cc bikes. 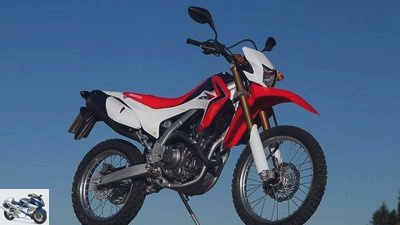 The Honda CRF 250 L is for all those who are just getting warmed up with the subject of off-roading.

The Honda CRF 250 L is not made for tough off-road use – in other words, just right for all those who are just warming up to the subject of off-roading. The single-cylinder known from the CBR 250 R may be missing a bit of steam below, but in return it convinces as a stress-free contemporary. At higher speeds it behaves almost like an electric motor and hardly vibrates. It’s a shame that Honda installs suspension elements without any adjustment option. For an individual setup and perhaps a little more reserves, only the accessories trade is available.

At least the basis is correct: the Honda CRF 250 L offers considerable suspension travel of 250 millimeters at the front and 240 millimeters at the rear. The exhaust sound is nothing for show-offs, the enduro is a long way from the aggressive thumping that was common 20 years ago. But that’s a good thing: On off-road tours, you run less of the risk of being scared away by law enforcement officers. All in all, the Honda pleases with its high-quality design and good equipment. 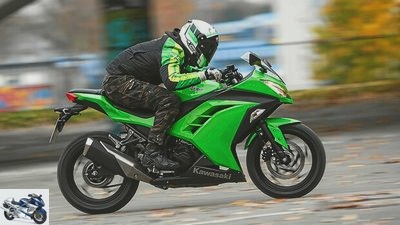 If you want to harvest acceleration with the Kawasaki Ninja 300, you have to sow speed.

Kawasaki cheats a bit here: When the old Ninja 250 was reworked, it became, whoosh, the Kawasaki Ninja 300 – nothing more quarter liter class. Is that why we put them out at the door? Oh no. Especially not when it comes to such a mature and fine motorcycle. The increase in displacement also brings the expected success: In order to swim with the traffic, less engine speed is now required, and the pressure from below has increased. However, lazing around is not allowed.

If you want to reap real acceleration, you have to sow speed. A nimble shift foot is an advantage when sprinting, especially since the clutch lever can be pulled almost with the eyelid (thanks to a servo unit). That Kawasaki is serious about the sporty model name Ninja, testifies to the anti-hopping clutch against rear wheel stamping during heavy braking and simultaneous, rapid downshifts.

Strengthen:
+ Revolving twin
+ Hardly vibrates
+ From the factory with ABS and slipper clutch 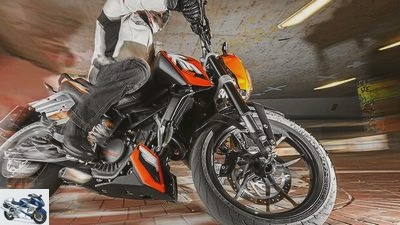 Although the KTM Duke 200 has less displacement, its engine performance surpasses the competition from Honda and Suzuki.

While KTM used to round off its model range upwards (from Duke to Super Duke), today it is the small cubic capacities that bring growth to the Austrians. The KTM 200 duke Although it has 50 cubic centimeters less displacement than the Honda and the Suzuki, their engine performance surpasses both. This is not the only reason why it can be celebrated as the ultimate joker, but also because of its extremely agile driving behavior.

The praise goes even further: both workmanship and design are very successful for everyone involved KTM 200 Duke attracts attention. The series tires from MRF weaken when wet and can be exchanged for branded rubbers when they are purchased. You will be able to come to terms with the fork, which is not very sensitive, but the insensitive and completely underdamped shock absorber literally calls for a replacement part. 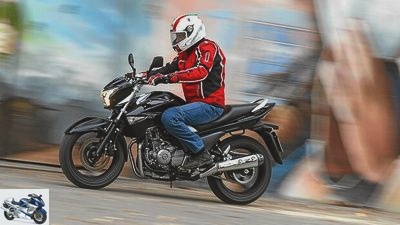 It looks a bit as if the earlier Suzuki models GSR 600 and B-King had a child: the result would have been the Suzuki Inazuma 250 KTM sees, a 250 can look significantly more pleasing and also weigh less. But the Suzi is less of a fidgety style motorcycle, but more of a horse-stealing friend.

Its in-line two-cylinder impresses with its high level of smoothness, and the 2-in-2 exhaust system gives off a subtle bubbling. In order to move quickly, however, you will have to get used to more hectic combustion noises, because the Suzuki Inazuma 250 always requires high speeds. This is not least due to the many pounds that she carries around with her. Perhaps these are also the reason for the successful suspension set-up. It offers the pilot a lot of comfort and still has reserves for a pillion passenger. Nevertheless, the wobbly steering behavior disturbs the idyll, and the high consumption of 4.4 liters per 100 kilometers is to blame.

Strengthen:
+ The engine runs nice and smooth
+Offers a lot of comfort
+ The chassis can also handle tours with a pillion passenger

Nobody denies that you can get around more confidently and comfortably with a BMW K 1600 GT than with the motorcycles presented in this article. Even the new middle class – bikes with around 800 cubic centimeters – will not be able to deal with when it comes to performance and pulling power. So why buy a small motorcycle when there is so much on the market “fatter” Bikes offers?

“fat” is a keyword. Even with the representatives of the quarter-liter class, there are sometimes empty weights of around 180 kilograms, but the majority of them are based on the 140 mark on the scales. That is less than half of the BMW mentioned at the beginning. And where there is less weight, there is less to accelerate. Ergo, less power is sufficient.

Not to mention the price: Said torque factory from Bavaria blows up a crater in the purse with over 20,000 euros, in which an average of four to five 250cc space. Even mid-range motorcycles often cost twice as much at around 10,000 euros.

But now an end to the number games – what about driving fun? It is well known that it is subjective and cannot be put into formulas. This is the little one’s pound. In addition to consciously foregoing performance that is suitable for the racetrack, you should also get one “rotten” Say goodbye to driving style. If you want to be quick with the candidates presented here, you have to drive actively, which means: A wrong approach cannot be compensated for by a vigorous twist on the throttle grip. If you are on the move quickly, you select braking points and curve lines precisely.

Don’t panic: these bikes are still unreservedly suitable for beginners. After all, their performance is easy to control and their driving behavior is straightforward. So it’s perfect for testing and improving your own driving skills. 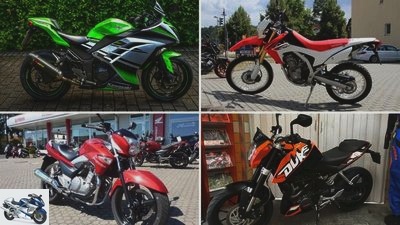 It’s amazing how little money you can buy a motorcycle for.

The 250 and 300 class are good starting points for motorcycling. The motorcycles are cheap and the maintenance is low. You can also find some bargains on the used market that make it hard to believe how little money you can buy a good used motorcycle. Here is a price comparison for the motorcycles mentioned: used 250cc and 300cc motorcycles in Germany.