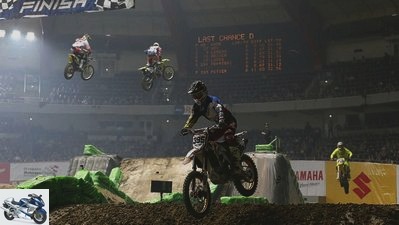 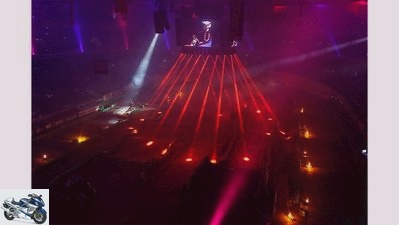 1/15
There are plenty of titles to be won at the 33rd Dortmund Supercross. Prince of Dortmund, even King – or how about the overall winner of the Supercross series? In any case, the opening in Dortmund offers something new every year – but always lively and good. 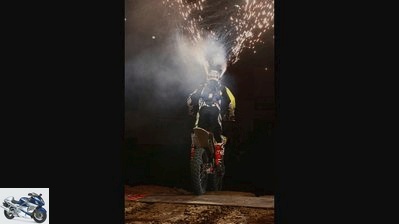 2/15
In the end, Valentin Teillet from France was able to secure the title of King of Dortmund with 54 points on his Honda. 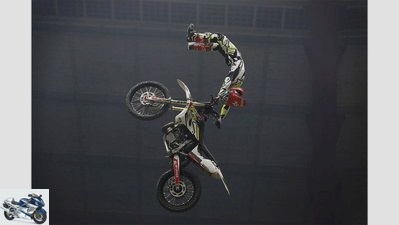 3/15
Impressions from the 33rd Supercross Dortmund. 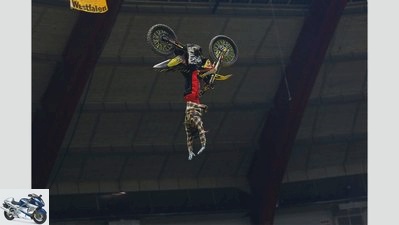 4/15
… Kai Haase hanging out upside down and without hands. 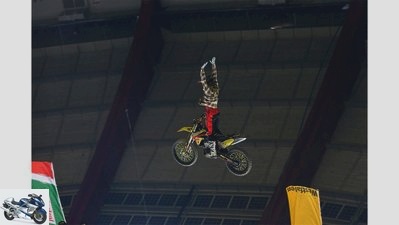 5/15
“Look Ma ‘, no hands!” – but this picture is a fake. Even if the hands-free driving or rather jumping already poses challenges for some motorcyclists, we actually see in this snapshot … 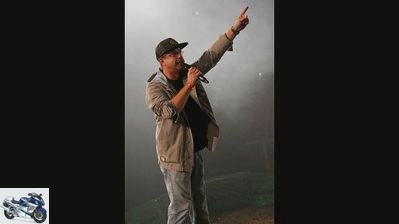 6/15
In the Westfalenhalle Dortmund, track spokesman Thomas Deitenbach not only gives the direction on the microphone. 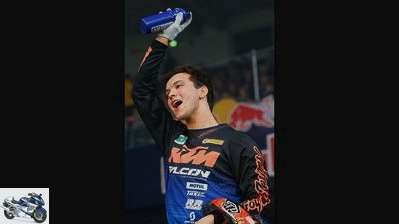 7/15
Dominique Thury caused excitement in the hall in the SX1 with the Friday and Saturday podium. 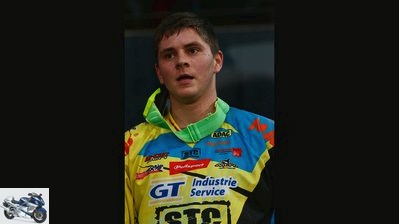 8/15
Stephan Buttner narrowly missed the coronation as Prince of Dortmund in the SX2. 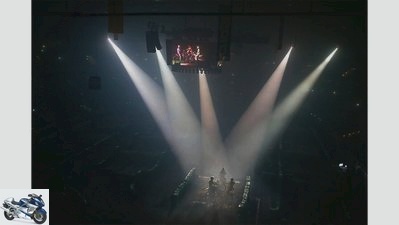 9/15
Impressions from the 33rd Supercross Dortmund. 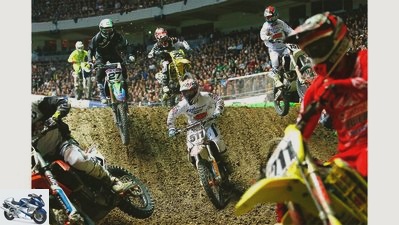 10/15
Impressions from the 33rd Supercross Dortmund. 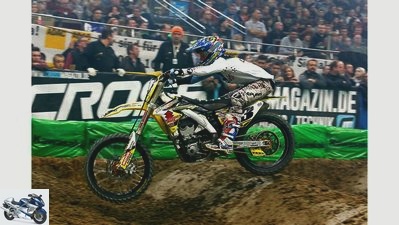 11/15
US boy Jace Wayne Owen came to Dortmund to clean up. Often the fastest, but with a lot of bad luck and crashes, he “only” achieved a Sunday win. 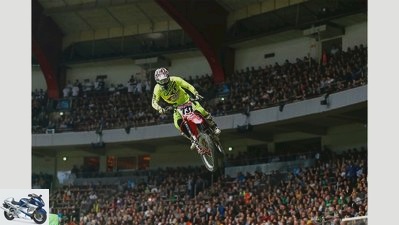 12/15
At the Supercross in Dortmund, that’s the Westphalenhalle. French fries, beer, warmth – the audience can also really enjoy the event. 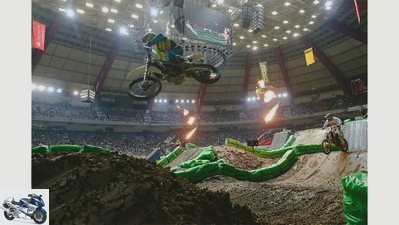 13/15
… because in contrast to motocross events, the supercross competition takes place in the hall. 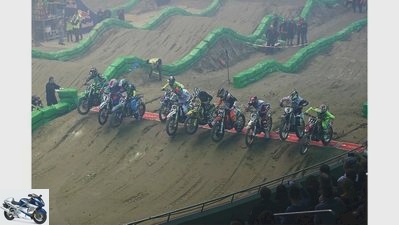 14/15
Ten drivers compete against each other. And completely regardless of the weather, … 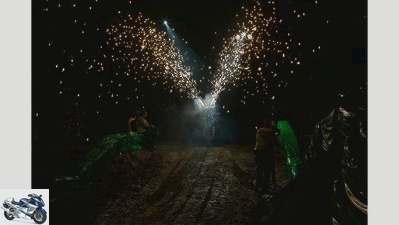 There are plenty of titles to be won at the 33rd Dortmund Supercross. Prince of Dortmund, even King – or how about the overall winner of the Supercross series? Everything is chic, but everything is uncertain. Only one thing is certain in the Westfalenhalle: Nobody can get past Thomas Deitenbach and his microphone.

When the man in the hat presents a “Dooooooomiiiiniiiiiiique” over the hall loudspeakers at the last award ceremony on Saturday, the hall audience subito gives the appropriate answer. Then comes loud and throating from 10,000 mouths: “Thuuuuuuuuuury”. Those are the moments when the 56-year-old Deitenbach simply smiles quietly and happily to himself: a sold out house, top show, exciting races, and a German – Dominique Thury – on the podium.

Supercross, or SX for short, is motocross taken to the extreme. Huge jump combinations, rhythm sections like the washboards that are so often decisive for the race, tight curves, steep ramps. A modeled arena for the best of the best. Supercross – but that’s also the perfect, really big show that the Americans love. And now we too. Big cinema, lights off, spot on. Top or flop. The escalation of the drama.

Preliminary runs, semi-finals, reunion runs – it remains exciting right up to the all-important final run. The Roman bread-and-games pattern in a more up-to-date, admittedly very cool guise. It has been going on in Dortmund for 33 years. And Tommi Deitenbach was there from the start. For the first time without microphone service, this year he is doing this job for the 32nd time in the Westfalenhalle. Even those who have never visited Dortmund’s SX will definitely know Tommi’s voice. Supermoto, Motocross, Enduro, MotoGP: It doesn’t matter where racing bikes roar, Tommy comments. His affection is for all two-wheeler sports, but his heart beats for Dortmund. The Iserlohner was a successful enduro athlete himself in the 1980s, but lost a leg in a serious accident. No reason for him to say goodbye to sport. On the contrary. Then reporters, ADAC men, trade fair organizers. And Dortmund Supercross again and again.

Tommi can still look forward to the wild times, because they are still pretty wild today. In the past they chatted miners for a bottle of schnapps and a lot of beer from a mining tube because they absolutely wanted a tunnel like the legendary Paris Bercy Supercross, today Tommi and his team are perfecting the laser show or the choreography. Stagnation means regression. He stands on the track during every training session, knows the drivers better than himself and has a keen nose for the demands and reactions of the audience. 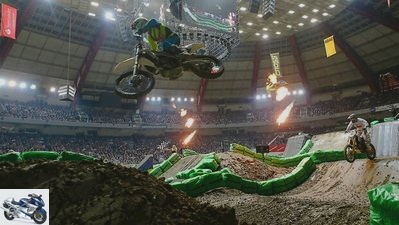 In contrast to motocross events, the supercross competition takes place in the hall.

He doesn’t want to be a non-partisan boring man, but also likes to knock out a real slogan from time to time. However, he also masters the sport-political balancing act between dusty bodies and necessary, logical decisions perfectly. But now enough chat, we want to get back on the track.

In Dortmund everything was different at first – and in the end everything was as expected. Greg Aranda, the dominator of the events in Stuttgart, Munich, Chemnitz and, most recently, the French championship, surprised with technical problems and falls, including concussions. But then he won the overall title in the ADAC-SX-Cup, because his closest pursuers Jace Owen and Ben Lamay imitated him and screwed up in the Westfalenhalle.

Valentin Teillet earned the Dortmund king title with elegance and precision. However, he did not remain flawless over the three days. That left a lot of space, especially for Dominique Thury. He fought like a lion, made the hall riot and Tommi Deitenbach almost lost his voice. Only a fall in the final on Sunday prevented the great success. Stephan Buttner in the SX2 almost cracked the overall victory in the SX2 Cup and thus completed the German luck in Dortmund. Hallooo, Germany, when was the last time it was in our SX halls?

To be precise: That was 2012. Year one after Ken Roczen emigrated to the USA. The talent of the century is not only missing Tommi Deitenbach, as he freely admits. Just looking back at Ken’s appearances in Dortmund, Tommi’s eyes shine! But the world’s best Supercross pilots are drawn to the USA, as if drawn to a giant magnet. Roczen bit and won through all motocross classes in Europe. Of course, he was also the Prince of Dortmund at the time. But after his Motocross World Championship title, he went straight to America. Now he is preparing to win the US SX Championship as the top favorite. There are the stars, the style, the big money.

But what did Ken Roczen leave the German scene in addition to being a powerful role model? One thing for sure: his home training track in Mattstedt, Thuringia, today the German SX center! A slope on which the shooting stars Stephan Buttner, Dominique Thury and the Koch brothers are currently doing their laps day after day. And if there is something positive about global warming: The mild and above all dry winter provided training opportunities in Germany that are otherwise only known to the successful supercross country France. With a little luck, a solid SX foundation for the future is currently being built in Mattstedt under the guidance of Roczen’s dad Heiko Klepka. Because one thing is clear: without special SX routes, without comparison, without training, there are no German stars!

But let’s be honest: Even without the really big superstars, not everything is bad in Europe. And especially in Dortmund. Delicious fries, sipping a beer, strolling through the hall – the advantages of supercross relentlessly show the negative points in motocross. Wife, girlfriend, family, everyone is sitting comfortably. Bad weather? Does not matter! You can see seamlessly in the cozy Westfalenhalle – and the appointment on the second weekend in January seems pretty perfect anyway. After Christmas fuss and the endless, bland winter sports loop on television, many are impatiently rubbing their hands. Finally motorsport again, live! Speaking of television: What is WDR filming over there with Tommi Deitenbach? The speaker always remains the recognizable, but above all the audible Dortmund figurehead. His “Hallooo, Dortmund” will certainly be the legendary prelude to three days of the finest supercross action in the pot in the future. 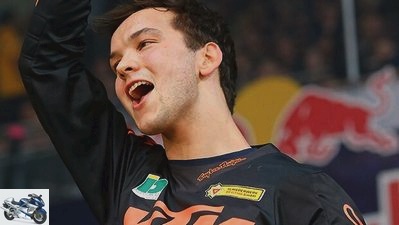