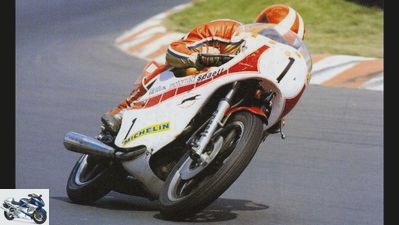 40 years of the Yamaha Cup in Germany

40 years of the Yamaha Cup in Germany
The frenzied classroom

Congratulations, it should live high: The Yamaha Cup, the father of all one-make cups, is turning 40. Generations of racing drivers have been trained here, some of them made it to the top.

As it is when you look back on 40 years: There are countless anecdotes and rumors, and depending on who is telling them, they turn out differently. Like 1978, in the first season of the Yamaha Cup, when the later world champion Kenny Roberts von Yamaha was ordered to lead the 50 Cup drivers over the Nurburgring-Nordschleife for a photo shoot.

40 years of the Yamaha Cup in Germany
The frenzied classroom

First, the version of Martin Wimmer, the first overall winner in the history of the Cup in that 1978 season: Nobody except him, Wimmer, was able to follow Roberts, at some point Roberts almost fell over the front wheel, then turned around, shaking his head and stunned that he was this youngster would not let them shake off.

Then the version of Theo Hoffmann, as the then customer service manager of the Yamaha importer Mitsui, together with Mitsui managing director Manfred Weihe, one of the ideas behind the cup: There were strict instructions to all pilots not to overtake the great master Roberts. But when the car with the photographer, who was still driving ahead, swerved, they attacked Roberts in a pack.

Both Wimmer and Hoffmann remember how Roberts later parked his cup machine in the paddock, visibly eaten, and Wimmer still remembers the unflattering words of the world champion. Something in the sense of: How can you give young people a motorcycle like that?

In fact, the XS 400, the first Cup vehicle, was anything but a filigree racing machine. The two-cylinder four-stroke engine with a meager 38 hp was considered extremely conservative and basically unsuitable for sporting ambitions. “The manifold often touched down when it was inclined,” remembers Martin Wimmer, whereupon he and his Cup colleagues did everything to ensure more ground clearance. The right and left manifolds were swapped, which brought a few millimeters. And Wimmer found a way to set the entire landing gear, front and rear, higher – without theo Hoffmann, whose stern eye otherwise remained hidden from any trickery, discovering the stealth. That means something.

In 1978, Wimmer became the first overall winner in the history of the Cup. He earned the 5750 marks for the motorcycle including helmet and leather suit as a pretzel seller at the Oktoberfest and as a temporary worker at a scrap dealer. Wimmer completed his first test drives with his Cup machine on the Munich-East motorway junction, a clover leaf: two and a half hours, always turning to the right. Wimmer’s mood for the Schauinsland hill climb near Freiburg: In the early morning hours, between four and six o’clock, he thundered up (and down) the mountain, “because it was already light then, but hardly a car was on the way”. That’s how it went back then, in times when there was hardly any racing training.

For Wimmer, the Yamaha Cup was the beginning of a ten-year close relationship with Mitsui / Yamaha, including three Grand Prix victories and four German championship titles. Wimmer was followed by a number of later stars whose career took off in the Yamaha Cup: Dirk Raudies became 125cc world champion, Kenan Sofuoglu managed five and Jorg Teuchert at least one Supersport World Championship title, Jesko Raffin won the Spanish Moto2 title and has been driving for years in the World Cup, and Germany’s Superbike figurehead Markus Reiterberger is currently on the way to his third IDM title. The statistics list seven world championship titles and a number of national titles that were won by former Yamaha Cup riders.

If you talk to Theo Hoffmann, now retired, who oversaw the racing Yamaha Cup classroom for decades as a technical manager, you hear a lot of good things about the generations of Cup drivers, regardless of whether they were future stars or amateur racing drivers. “Discipline, devotion and love for sport,” he attests to his former pupils. “Almost without exception, they were enthusiastic young people who motivated us anew every year.”

The glory only suffered a damper when the international Yamaha Cup was announced in the early 1980s, in addition to the national cup. “All of a sudden, pilots with the habitus of future world champions came along,” recalls Hoffmann. The basic idea of ​​the Cup, namely equal opportunities thanks to identical motorcycles, had not been internalized by the international pilots, “the moral nutritional value”, as Hoffmann puts it, was no longer there. Worn down by discussions about the technical regulations, Hoffmann quickly stopped the international cup.

Since the end of the 1990s, Thomas Kohler has been acting as a cup manager, virtually outsourced, and Kohler heads an advertising agency in Backnang, Swabia, full-time. Which pilot is most memorable for him? “Kenan Sofuoglu,” comes the answer without hesitation. No other pilot has embodied that love of sport, that passion, as Theo Hoffmann put it, in such a way, says Kohler. Sofuoglu, who now enjoys Rossi status in Turkey, only appeared five days before the opening training session. He didn’t speak a word of German and not a word of English. Fate would have it that in that year, 2002, there was still a starting place free, and when Sofuoglu handled the Cup Yamaha, which was new to him, in an impressively playful manner during a specially scheduled test drive, it was clear to Kohler: “We need the boy.” Sofuoglu thanked him with the cup victory, it was the starting shot for an international career.

Since then, the Yamaha Cup has lost its nimbus as a leading talent factory. The career ladder for aspiring GP professionals today mostly leads through national Moto3 championships or the Red Bull Rookies Cup. It doesn’t help that the minimum age for Yamaha Cup participants of 18 years only exists on paper and 14-year-olds receive a starting permit.

The Cup field developed more and more into a mix of ambitious youngsters and hobby racers of the older age. A win-win situation, so to speak: the young encourage the old, the old give back their routine and experience. In 2017, as in 2016, there was a father-son pairing. Last year Bernd (57 years) and Marc Ruber (29), currently Rainer (49) and Sandro Wagner (15).

So the Yamaha Cup is celebrating its 40th season. As usual, as part of the International German Motorcycle Championship (IDM). As usual with the supersport icon R6, which has been in use since 1999. Unlike in the early years of the Cup, when a different motorcycle was ridden every three or four years, sometimes two-stroke 250s, sometimes four-stroke 600s, there is now constancy when it comes to motorcycles.

The only regret is that the first two races had to be canceled in the anniversary year of 2017 because delivery of the new R6 was delayed. That is why the start of the season took place late, on the first weekend in July, in a race in Oschersleben that was scheduled at short notice. This does not detract from the popularity of the Yamaha Cup: with 42 riders, it is fully booked again this year.