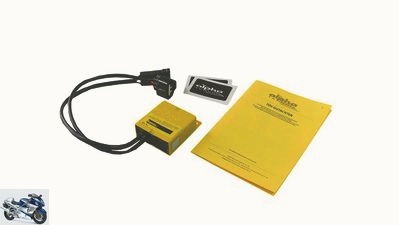 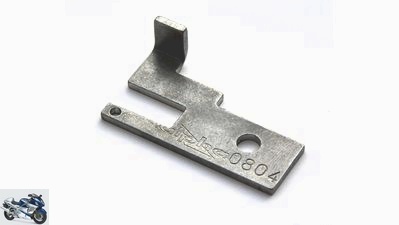 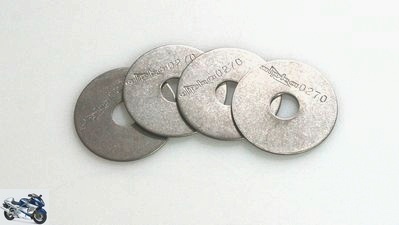 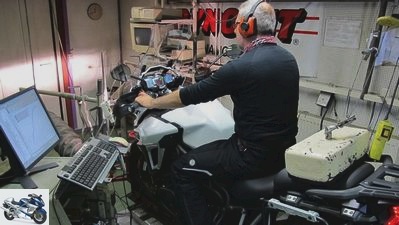 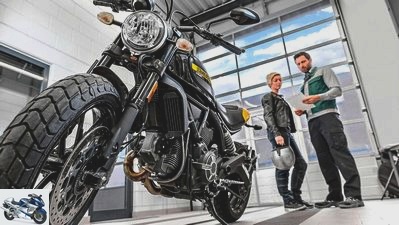 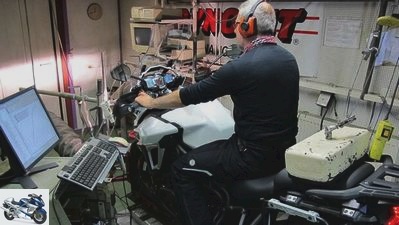 2/7
MCR throttle modules (yellow) for Euro 4 models are mini control units that transmit a modified signal to the production control unit. Like all retrofit kits, they are supplied with a component certificate relating to the vehicle identification number.

4/7
They are usually combined with orifices.

5/7
Performance control on the test bench: In the lower speed regions, the machine should react like an open version

6/7
After the workshop, you go to a testing organization such as Dekra for acceptance. 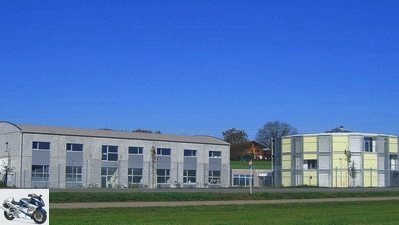 Have a crush on the wrong bike because it has more power than the A2 license allows? Alpha Technik offers many solutions to throttle the dream motorcycle to A2-compliant 48 HP. You can read here how it works, what it costs and what needs to be considered.

Does your heart beat faster at the sight of a classy Ducati Monster 696 from 2012? Have you perhaps taken a crush on the Honda Africa Twin, Kawasaki’s Versys 650 or the Suzuki SV 650? Regardless of whether you are buying a used or a new one: The desire for your favorite model does not have to fail because of the 48 HP hurdle for beginners. According to the current EU driving license directive, which came into force at the beginning of 2013, all motorcycles that do not produce more than 70 kW (95 PS) as standard may be throttled to A2-compliant 35 kW (48 PS).

Germany had initially waived the 95 hp limit for the original models when it was implemented nationally, which Brussels did not agree with. The German legislator had to backtrack and improve the driving license regulation accordingly at the end of 2016. But there are no rules without exception: Those who obtained their A2 driver’s license before December 27, 2016 can continue to drive machines that are throttled to 48 hp and whose standard output power exceeds 95 hp. But be careful: When driving to other EU countries, there may be difficulties with the authorities. The Motorcycle Industry Association (IVM) therefore expressly advises against this.

Alpha Technik is the market leader in throttling

Alpha Technik from Stephanskirchen in Bavaria is the market leader in throttling. In 1992 Josef Hofmann and Josef Meier founded the company in order to be able to draw up parts reports for changes in performance. At that time there was still a 27 HP limit (20 kW) for the stepped driving license, which was then increased to 34 HP (25 kW) in 1993 and most recently to the current 48 HP (35 kW) in 2013. Alpha Technik now has around 400 available throttle kits on offer. The takeover of competitor Motorradland in 2002 also added solutions for today’s young timers and exotic cars to the portfolio.

A new chapter was opened in 2016 with the electronic throttle for Euro 4 models. Alpha Technik now offers its patented and utility model protected MCR modules for 34 vehicle types – MCR stands for Micro Controlled Restriction. Very current for the Honda CB 650 RA and CBR 650 R from year of construction 2020, and an electronic throttle for the Yamaha Tracer 700 will soon be expanding the delivery program. “All throttle sets, whether mechanical or electronic, are vehicle-specific in-house developments by Alpha Technik “, says Gunter Haasl, head of the homologation department. 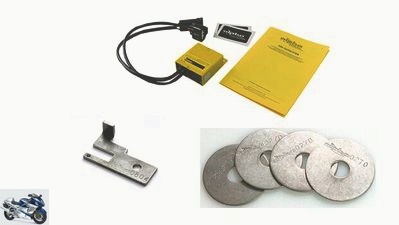 MCR throttle modules (yellow) for Euro 4 models are mini control units that transmit a modified signal to the production control unit. Like all retrofit kits, they are supplied with a component certificate relating to the vehicle identification number. Throttle slide stops (bottom left) are primarily used in carburetor engines. They are usually combined with throttle orifices (bottom right).

Mechanical throttling is possible for all vehicles including Euro 3. In contrast to automobiles, gasoline injection became established relatively late in motorcycles. Although Kawasaki launched a Z 1000 EFI as early as 1980, gasoline injection was only used to a significant degree in series production at the turn of the millennium. Due to stricter emissions regulations, most of the carburettor bikes disappeared in 2008. There are two options for throttling, depending on the mixture preparation: In carburettor engines, throttle slide stops and throttle orifices are usually installed – a narrowing of the intake tract in order to reduce the air supply. Gas path limiters are used in injection units. This is a mechanical stop in the gas path that prevents full throttle and only allows a calibrated partial load. Depending on the vehicle type, the throttle stop is also combined with throttle orifices.

“We specify 60 to 90 minutes as a guideline for installation working time in the workshop”, says Gunter Haasl. This coincides with manufacturer guidelines for comparable work.”Depending on the model, the tank, paneling parts or airbox must first be dismantled in order to be able to install the throttle set”, so Haasl. This working time is of course also calculated by the workshop. The installation of the electronic MCR choke, on the other hand, requires significantly less time. “We estimate 45 to 60 minutes for it”, so Haasl. But even in this case, the relevant components – here the control unit and cable harness – must first be freely accessible.

The MCR module is a mini control unit that is inserted between the throttle grip and the production control unit. It electronically regulates the calibrated partial load by transmitting a modified signal to the original control unit. For Euro 4 models with conventional throttle cables, additional throttle orifices are still indispensable for the correct mixture composition. They prevent leaning when the fuel supply is reduced but the throttle valves are fully open.

Correct ratio of gasoline and air

The latest MCR version, homologated by a parts certificate, simplifies the throttling of machines “Ride-by-wire”. They can be reduced to 48 hp without the additional throttle orifices previously required. The newly developed control technology of the modules ensures the correct ratio of gasoline and air at all times. “When the first ride-by-wire models hit the market, it was a real challenge for our developers”, admits Gunter Haasl. That was a tough nut to crack that kept the four-person team busy for a few weeks. After all, it is important to harmonize performance development behavior and load change behavior. “In the beginning, the throttled motorcycle should react like the open version, and the power output should only flatten out the closer the limit gets”, Haasl describes the procedure. An important side effect: when the driver is released again later, the usual responsiveness is retained, but he is then happy about more bang at the top.

Performance control on the test bench: In the lower speed regions, the machine should react like an open version

Whether the untamed dream bike comes from a private seller or from a branded dealer: There is no way around the workshop to install a throttle, because that is work for professionals. In practice, the companies order the conversion kits from Alpha Technik and receive them with all parts and parts certificates relating to the respective vehicle identification number (VIN). This is fundamentally important for guarantee and warranty as well as for the necessary change acceptance at a technical testing organization such as TuV, Dekra or others after the installation.

This change acceptance can often also be carried out in the respective workshop by the officially approved inspectors. The costs for this acceptance are between 30 and 50 euros – they vary, among other things, depending on the testing organization and federal state. With the test certificate, it goes to the registration office to have the changes entered in the vehicle documents. 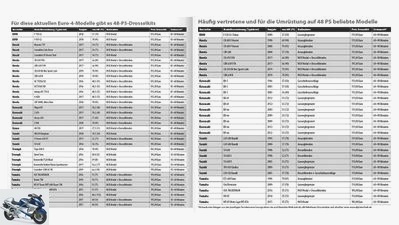 Last tip for everyone who wants to throttle a new vehicle A2-compatible: In order to avoid problems, you should first register with the original COC data and only then have the change in the vehicle data entered. The reason: When the vehicle is first registered, data is stored in the authorities’ IT systems, which are stored in the vehicle’s EC operating license and described in the COC provided. The registration certificate is created from this information. A change to the master data before the first registration can lead to important descriptions such as key numbers and EC vehicle classes no longer matching the modified vehicle data.

Interview with Josef Hofmann, together with Josef Meier managing director of Alpha Technik

The idea behind the foundation of your company was to produce parts reports for changes in the performance of series machines. Was that a niche in the market?

At that time, only the TuV was allowed to enter changes to the vehicle in the vehicle documents. At that time, the TuV was an institution that you only went to if you had to. Throttle sets and tire approvals have been created and sold by Zweirad Hofmann in Stephanskirchen for the Honda and Suzuki brands and by Motorrad Meier in Saal for the Kawasaki and Yamaha brands since 1985. The same applies to reports on the increase in performance to over 100 hp against the background of the then voluntary self-restriction of motorcycle importers to 74 kW. In 1992 Josef Meier and I decided to bundle these activities in the new company Alpha Technik and thus offer our customers all reports from a single source.

How has this core business changed in recent years??

Over the years, performance enhancement reports and tire approvals were no longer necessary. Due to the gradual adjustment of the tier driving license with a limitation to initially 27 HP over 34 HP to now 48 HP, new reports were necessary again and again. Because every driver license holder naturally wanted to have the maximum permissible engine power in his motorcycle.

The now permitted 35 KW (48 HP) have certainly persuaded additional customers to get the motorcycle license. For us that was not only positive, because at the same time they were banned from driving motorcycles that were throttled from more than twice the original power (original power over 70 KW / 95 PS). The motorcycle models possible for the driver license holder were thereby considerably restricted. With the introduction of the Euro 4 standard, the throttle sets also had to be adapted to the new, expanded regulations on anti-manipulation.

If you distinguish between Euro 3 and Euro 4 models: How are the sales figures distributed between the two segments?

Throttle sets for Euro 3 motorcycles are still sold a lot, as they are older, mostly cheaper machines.

From this year on, the new Euro 5 regulations will gradually take effect. What has changed?

The most important innovations are stricter exhaust emission limits and on-board diagnosis II with extended functions.