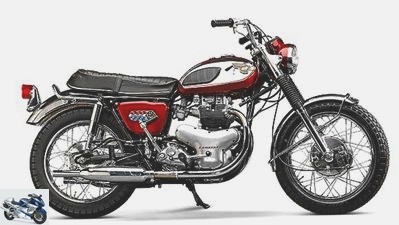 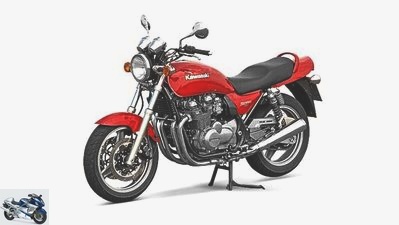 1/10
1991 Kawasaki Zephyr
The alternative to higher-faster-further: The naked bike with air-cooled four-cylinder took up classic design elements, offered as 550, 750 and 1100. 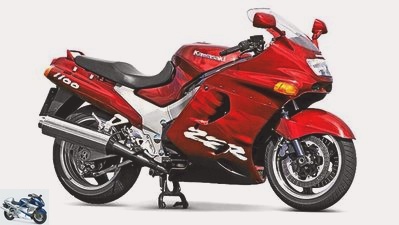 2/10
1990 Kawasaki ZZ-R 1100
The bolide seemed to be bursting with power even when it was stationary and openly came threateningly close to the magical 300 km / h mark, and was long considered the fastest production motorcycle in the world. 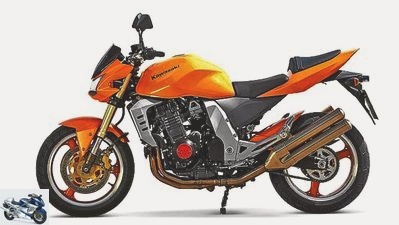 3/10
2003 Kawasaki Z 1000
The series fighter picked up on old traditions: The four exhaust pipes should be reminiscent of the legendary Z1. The engine came from the super sports car ZX-9R, had 127 hp. 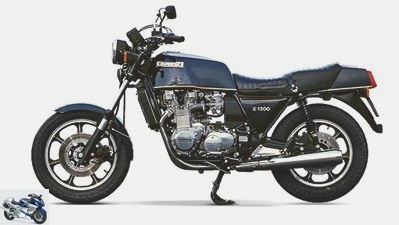 4/10
1979 Kawasaki Z 1300
The powerful six-cylinder with cardan shaft and 120 hp, presented at the end of 1978, was the answer to Honda’s CBX. The arms race in terms of displacement and power was in full swing. 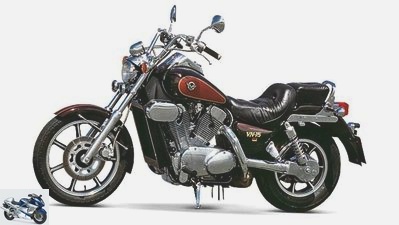 5/10
1988 Kawasaki VN-15 SE
The soft chopper wave of the early 80s was followed by the big twins. With the VN-15, Kawasaki once again set a benchmark: it had the thickest cylinders to date. 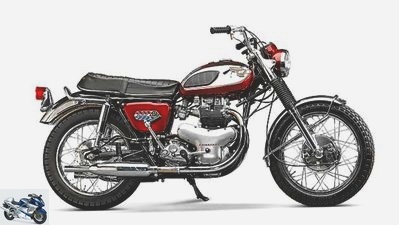 6/10
1966 Kawasaki 650 W1
The first flop: The W1 goes back to a machine from the manufacturer Meguro, which was bought by Kawasaki. This in turn had copied the look of a British BSA A7. 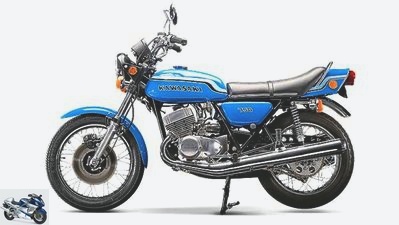 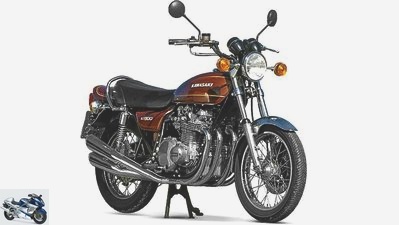 8/10
1973 Kawasaki Z1 900
“Frankenstein’s Daughter”: Cracked the 200 km / h sound barrier easily as a four-stroke engine – ideal to really show the philistines! The Z1 was the revolutionary motorcycle of the 70s. 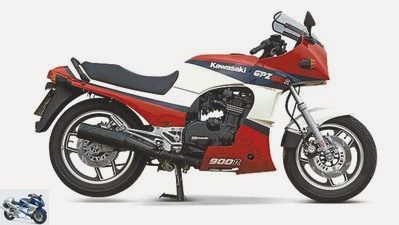 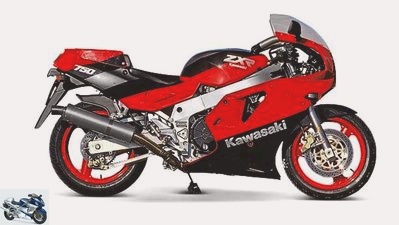 10/10
1989 Kawasaki ZXR 750
The vacuum cleaner: the trademark were the two hoses through which the intake air was supposed to be pressed into the airbox at high speeds to promote performance.

Motorcycle production with an anniversary
50 years of Kawasaki motorcycles

As a whole, Kawasaki is much older, but motorcycle production can celebrate its 50th anniversary in 2011 – and look back on wild, eventful times.

If you dig very deep into the history of Japanese motorcycle construction, you make an astonishing discovery: right up in the ancestral gallery of the manufacturer who later, much later, once went to Kawasaki Motorcycle & Engine Company is here – a Harley-Davidson. Even if, admittedly, only briefly.

Motorcycle production with an anniversary
50 years of Kawasaki motorcycles

In the 1920s, the Meguro company in Japan was one of the first motorcycle manufacturers to just start shooting up like mushrooms there. Although the term manufacturer is probably still a bit exaggerated for that time: Small businesses take on European and American machines with the aim of replicating them. Meguro tries a Harley-Davidson, a Model J. The replica of the alternately controlled F-head motor, one of the first V-Twins, from which Harley later made the flat-head, has little success. Meguro therefore shifts back to technology from Europe and specializes first in smaller single, then larger in-line two-cylinder. They are also copies, but this time from Matchless and BSA. Thanks to the know-how acquired over decades, they also functioned reasonably well. But in stark contrast to Honda, whose founder Soichiro Honda in the 50s mainly focused on light, inexpensive mopeds for the masses and thus founded his global company, Meguro builds large, strong luxury motorcycles based on European models. And thus suffered economically at the end of the 50s.

This is where Kawasaki comes into play for the first time. Even if not yet as a motorcycle manufacturer. In the middle of the last century, the company was already a network of companies operating throughout Asia and, with a long history, is one of the greats in the country: The group emerged from a shipyard founded in Tokyo in 1878 by Shonzo Kawasaki, the son of a kimono dealer In addition to the first Japanese ships with steel hulls at the beginning of the 20th century, they also built locomotives and submarines and became Japan’s top supplier for warplanes during the Second World War. Meihatsu, a manufacturer specializing in mopeds and smaller motorcycles, was also part of this established network of companies. For Meihatsu, the Kawasaki Machine Industry is developing an air-cooled single-cylinder four-stroke engine with ohv technology and 148 cubic meters. From 1953 the single was produced in Akashi under the name KE-1 (for Kawasaki Engine) and installed by Meihatsu. Unlike the big, heavy Meguros, the cheap little Meihatsus sell well. In 1960, the then Kawasaki aviation department finally took over Meguro and merged the economically troubled large motorcycle manufacturer with the bread-and-butter bike builder Meihatsu.

Kawasaki Heavy Industries, the modern name of the entire group, suddenly had a two-wheeler range on offer, ranging from the Meihatsu moped to the large Meguro two-cylinder. Most importantly, this accumulated potential should be marketed as Kawasaki Motorcycles as of now.

The B7, a somewhat chubby 125 cc two-stroke single-cylinder with four-speed gearshift, massive fenders and pushed short swing arm at the front (photo on p. 55 above), was the first official Kawasaki motorcycle in 1961 under this brand name, which has long been known to every child in Japan was offered. 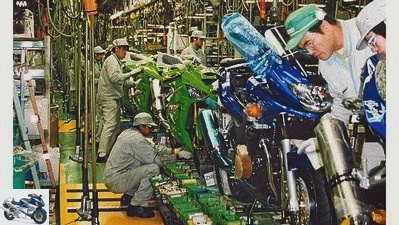 Kawasaki can manufacture up to 1,000 motorcycles per day at its plant in Akashi in the Kobe region. The assembly is still mostly manual work.

Other mopeds followed, including the Pet large-wheeled scooter, which was astonishingly similar to the Simson Schwalbe. But soon the Kawasaki superiors looked in the direction of the USA. This time not only to get technical suggestions, but to offer your own bikes on the huge US market as a budding global player.

But the Americans had little interest in small everyday machines or even scooters. Here again, the big four-stroke motorcycles that Meguro had brought into the company marriage were in demand. This resulted in the 650 W1 (see p. 55 below), the first large Kawasaki that was very reminiscent of English parallel twins. However, this concept was unsuccessful in the United States. So a new one had to be found in order to be able to compete in the world’s largest sales market: Light, fast two-stroke engines, so they thought at Kawasaki, should be exactly the right thing for Americans who were definitely leisure and pleasure-oriented in the sixties. And indeed: the 250 twin-cylinder A1 Samurai from 1966 and the 350 A7 Avenger (1967) sold significantly better.

Kawasaki’s new way of defining yourself through speed and sport was refined and took shape in 1968 in the shape of the three-cylinder two-stroke H1 Mach III. With 500 cubic meters, at that time a sensational 60 hp for a two-wheeler and a curb weight of 174 kg, the Mach III was a real projectile. With a top speed of 185 km / h, she laid the foundation for an image that Kawasaki would stick to for the next few decades: namely to build the fastest (series) motorcycles in the world. But also the wildest. Because the chassis only moderately digested the unheard-of power of the triplets, which were soon to be offered as 250, 350 and 750 (H2).

In Germany, the Hamburg motorcycle dealer Detlev Louis took over the import of the new and youngest motorcycle brand from Japan in 1968. A wise decision. Because already at the IFMA 1972 in Cologne, the predecessor of today’s Intermot, Kawasaki landed the next big hit: the 900 Z1. The large, powerful four-cylinder was Kawasaki’s answer to Honda’s CB 750 Four, which was introduced in 1969. The Z1 and the two-stroke engines went like hot cakes. From that time, Detlev Louis said: “We don’t sell Kawasakis, we allocate them.” The demand was far greater than the supply.

With a top speed of 227 km / h measured by MOTORRAD on the Nordschleife at that time, the Z1 made everything that had been there look old. But because she also had to struggle with chassis weaknesses, MOTORRAD editor Franz-Josef Schermer coined the expression “Frankenstein’s daughter” at the time. The half-admiring, half-contemptuous nickname stuck to the Kawa, but did not detract from its success. On the contrary: a rebellious motorcycle was exactly what the young savages were craving for in those days. It marked the breakout of the mustache of the kidney-table era. Which, by the way, was embodied on the street by BMW motorcycles. The Z1 enjoys cult status to this day. Although Kawasaki was the youngest motorcycle manufacturer, it belonged to the largest group, which had also operated internationally as Kawasaki Heavy Industries since 1969, and was now definitely among the “big four” from Japan.

Step by step, Kawasaki has now expanded its model range: With the Z 1000 The first thousand came in 1976, but at the same time a number of one and two-cylinder four-stroke engines with up to 400 cubic meters were built and the middle class was served by the Z 650. At the same time, the Japanese tried to further promote their image through targeted use in motorsport. 1978 Kawasaki signed Bayern Toni Mang as a world championship factory driver. He returned the favor and won the title for Kawasaki in both the 250 and 350 classes in 1981. Even if Kawasaki is no longer at the forefront in the motorcycle world championship today, the color green has been a force on the road since Mang at least.

Today, around 2,200 people work for the motorcycle in Akashi, where the B7 125 was built 50 years ago & Engine Company. Up to 30,000 motorcycles are produced per month in two halls on the approximately 500,000 square meter Kawasaki industrial area, where aircraft turbines and industrial robots are also manufactured. At peak times, 1,000 bikes roll off the eight production lines every day. From the first bending of the frame tubes or from the casting of the aluminum frame to the finished motorcycle, assembly takes about 90 minutes on average. The one-, two- and four-cylinder units from engine production are delivered directly to the assembly lines. Kawasaki is currently building around 50 different motorcycle models in parallel in Akashi. One of the most beautiful is certainly the newest: the W 800. The classic twin goes back to the beginnings, to the 650 W1, the first large motorcycle from Akashi. Congratulations on this and on the anniversary!