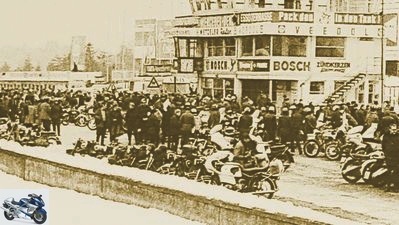 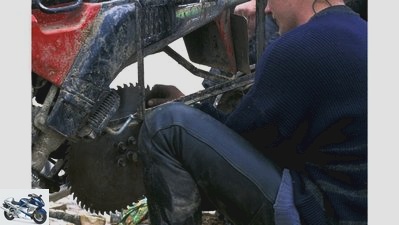 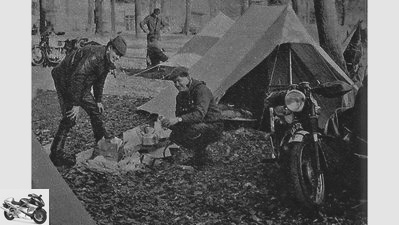 2/25
There was neither GoreTex nor heated grips to protect against the cold and wet. 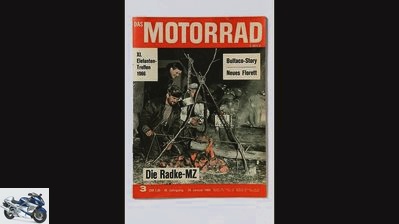 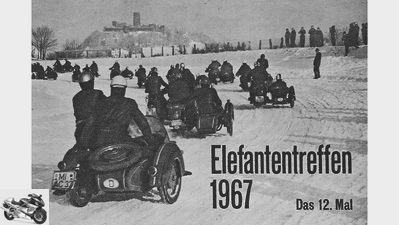 4/25
The magic remedy is still today: having fun driving. 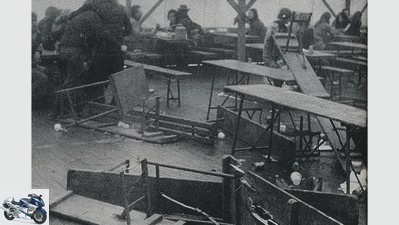 5/25
Outbreaks of violence and one death: In 1977 the meeting seemed to be over, and MOTORRAD also demanded: “Stop it!”. 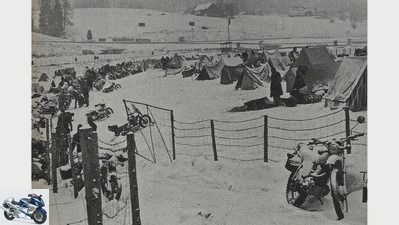 6/25
The new beginning at the Salzburgring: In Austria the elephant meeting found its way back to the old spirit. 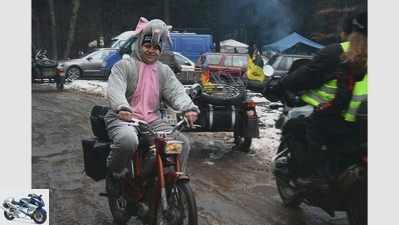 7/25
The smaller “old elephant meeting” on the campsite at the Nurburgring. 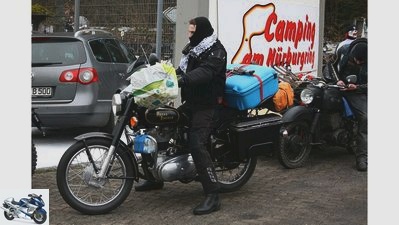 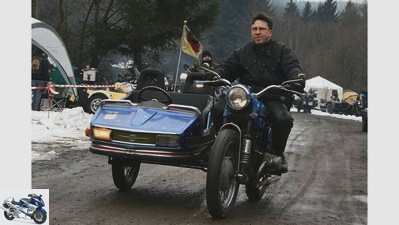 9/25
The organizers are critical of each other, the visitors can’t care. 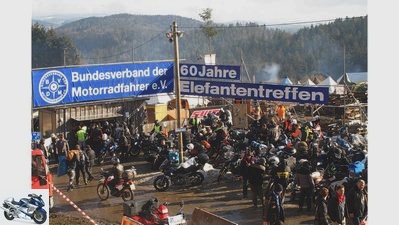 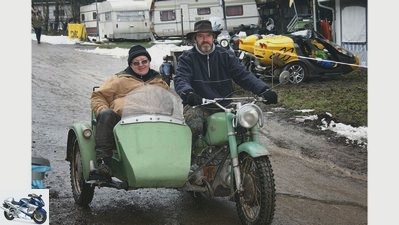 11/25
They are rare, but one or the other Zundapp KS 601 “Green Elephant” keeps coming to the elephant meeting. 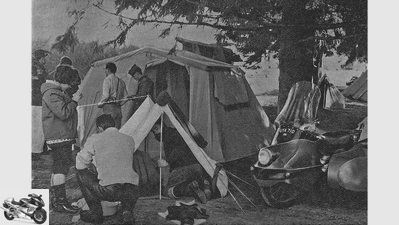 12/25
It looks like a summer idyll by the lake. But when the photo was taken in 1966, the temperature was double-digit. 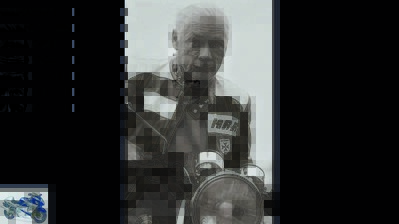 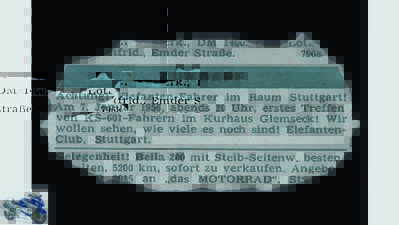 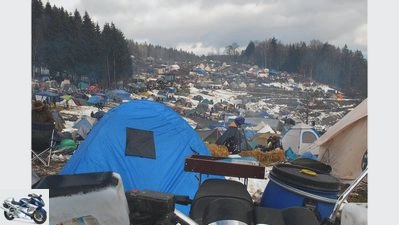 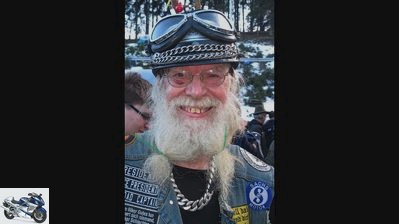 16/25
Well over 4000 bikers were there in 2016 and had fun, reported the Federal Association of Motorcyclists from Solla. 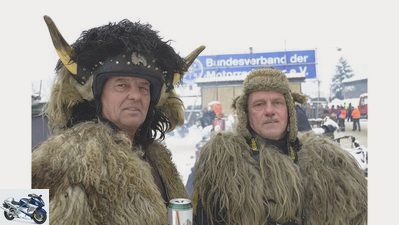 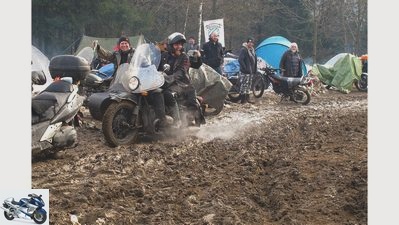 18/25
Most people leave their toothbrush and deodorant at home for a few days. 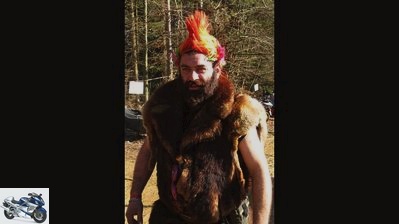 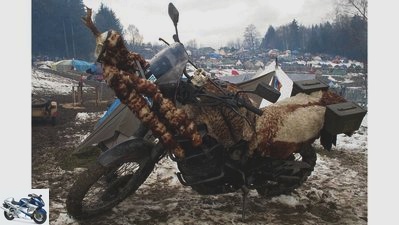 20/25
… a thick skin has never harmed anyone at the elephant meeting. 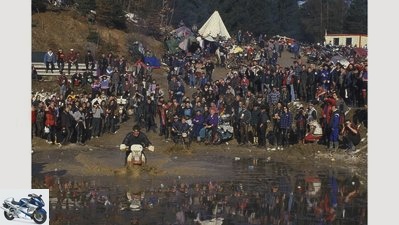 21/25
When it thaws, the “witch’s cauldron” likes to fill up with a nasty broth – and at some point the first one dares and drives. 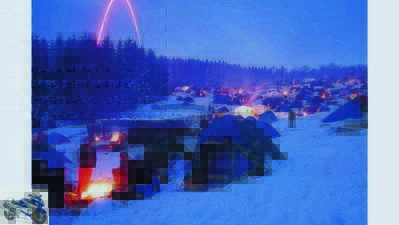 22/25
In the evening around the campfire you are among yourself. 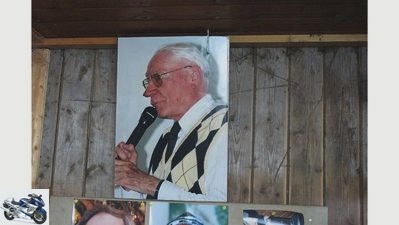 23/25
Even 60 years after the first meeting, “Klacks” photo 2016 hung like all the years before in the organization office of the BVDM elephant meeting in the Bavarian Forest. 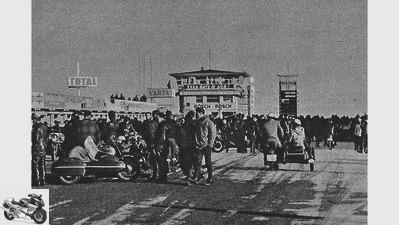 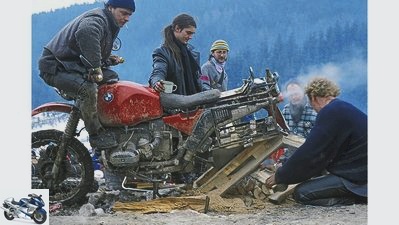 25/25
It is a tradition to provide firewood with simple technical solutions.

60 years of the elephant meeting

Like an elephant, so stubborn and unalterable, the elephant meeting trots through German motorcycle history. And has long since become a part of it. The meeting has been around for 60 years. Time to put your trunk up and look back.

The elephant meeting was a product of the economic miracle. Because when more and more Germans were able to afford a car in 1955, the motorcycle, on the other hand, became more and more unpopular. And only those suffering from hunger who couldn’t afford any other vehicle rolled through the winter on two (or often three) wheels, freezing. Or just real fans who literally made hardship a virtue.

This explains the sentence “We want to see how many there are!” It comes from a classified ad in “Das MOTORRAD”, issue 26/1955. It was placed by Ernst Leverkus, who was just 33 at the time, a test employee at the MOTORRAD editorial team and privately engaged in the Stuttgart Elephant Club. “Green Elephant” was the nickname of the Zundapp KS 601, built in Nuremberg from 1950 to 1957. Inspired by its powerful boxer engine and the mostly lime green paintwork, Ernst Leverkus had coined it in “Das MOTORRAD”. Leverkus, whose nickname was “Klacks”.

In fact, that weekend at the beginning of January 1956, 20 Green Elephants came to the inn near Stuttgart, which still exists today as a motorcycle meeting place. In the following year there were already around 50 drivers who, despite ice and snow, sometimes even drove their teams from Hamburg and what was then West Berlin to Glemseck. From 1958 onwards, it was no longer just Zundapp and sidecar drivers, and the meeting was like a traveling circus in a different German city every January. Until 1961, when the elephant meeting found a temporary home on the Nurburgring.

Since then it has been the Federal Association of Motorcyclists. V. (BVDM), who regularly organizes the world’s largest motorcycle winter meeting. Whereby the progress of the history of the meeting was very changeable. At first it grew. And vigorously. As early as January 1966, ten years after the first meeting in a small, steamy restaurant, around 10,000 visitors came to the ring. Back then there were already quite a few “daring guys in four-wheeled boxes”, as Leverkus then ironically put it. But still the majority had traveled honorably freezing on two or three wheels. But the scene changed. And with it the scenery at the elephant meeting on the ring.

With the 70s the rocker clubs came up in Germany. The motorcycle changed from a “poor man’s vehicle” to a “bad boy bike”. Instead of the symbolic gasoline, many just had too much alcohol in their blood. Police were present everywhere, after all, the second generation of the RAF was already shooting its way through Germany. And so it banged, even if not politically motivated, at the elephant meeting in 1977: During a beer tent fight, one of the police officers deployed fired a warning shot in the air. (Other sources report that the man had his service weapon snatched from it, then the shot would have been released.) The bullet ricocheted off an iron tent post and hit a visitor. The man was bleeding to death. MOTORRAD also demanded: “Put an end to the meeting!” It was the temporary end.

And the final farewell to its founder. Because for the following years the meeting was moved to the Salzburgring, far away from all metropolitan areas. It remained peaceful, it grew again – and the mood for celebration soon returned. But it was different from the spirit from the 1960s. In any case, Ernst “Klacks” Leverkus was very angry when he and his wife Inge arrived in the sidecar at the Salzburgring: “The first thing we saw,” the two remembered many years later, “were a few dead bodies. I didn’t even turn off the engine, just turned around and drove straight home. That was 1981, ”he recalled almost 15 years later. “They made a shooting festival out of it,” was the disappointed result of the man who had to realize that this scene was simply no longer his. A generation change had taken place.

Today in Thurmansbang and at the Nurburgring

All the more astonishing how the elephant meeting has shown itself to be intergenerational since then. And twice. In 1989, after quarrels with the local authorities, the elephant meeting moved away from Austria to the grounds of the Solla stock car club below the hamlet of Loh. Here, in the Lower Bavarian community of Thurmansbang deep in the Bavarian Forest, the meeting has been taking place ever since. It is organized every year at the end of January or the beginning of February by the BVDM, the association founded in 1958 by Ernst “Klacks” Leverkus, among others.

And in 1990, as a kind of parallel event, it gained a foothold again at the Nurburgring as the “Old Elephant Meeting”. Since then, the “Old Elephant Meeting” has taken place every year on the site of the campsite there, mostly two weeks after Thurmansbang, but never at the same time. It is seen as a little smaller than the meeting in the “witches’ cauldron” of Solla / Loh – and more familiar.

Improvisation against mud and cold is a must

But the rules of the game are pretty much the same: no cars on the pitch, fireworks of any kind are prohibited, and the participants themselves are essentially the program. Improvisation against mud and cold is a must, being there is everything – and the fun around the campfire comes naturally. Incidentally, another generation change is not in sight. From 16 to 66 and older are the participants at both meetings.

And seriously “no brainer” Leverkus? Born in the Rhineland and former MOTORRAD tester, he died in 1998 at the age of 75 in his adopted home Althutte near Stuttgart. He had not been to an elephant meeting since 1981. But his memory is still held in high esteem: 60 years after the first meeting, his photo was hanging in the organization office of the BVDM elephant meeting in the Bavarian Forest in 2016, like all the years before.