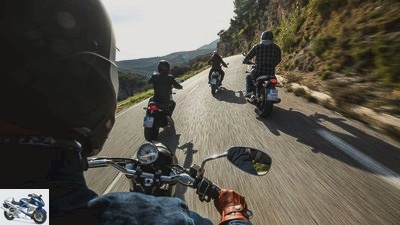 Action day against noise: it can also be quieter

On Noise Day on April 28, 2021, the Federal Association of Motorcyclists (BVDM) is launching an awareness campaign for motorcyclists with the approach “It can also be quieter”.

Since a The Federal Council resolution from the previous year is the issue of motorcycle noise especially moved into the public focus. The BVDM, representing the interests of motorcyclists, has been dealing with the problem for a long time.

The association is now taking the Noise Day, Wednesday, April 28, 2021, as an opportunity to start its awareness campaign and to specifically advertise low-noise and considerate driving among motorcyclists. Due to the corona, there are no events, only a press and publicity campaign. 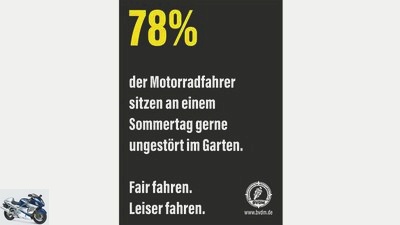 Motorcyclists have it in their hands

The BVDM is committed to reaching as many motorcyclists as possible and, as a result, to audibly reduce the noise caused by motorcyclists for a short time. Because motorcyclists, according to the BVDM, have the problem literally in their hands. Because the driver plays a major role in how loud a motorcycle really is when it is being driven. If you turn it up fully in low gear, your machine will be loud, if you shift up early, you will be much quieter on the road. The association appeals to all motorcyclists to behave considerately and to drive in such a way that no one is unduly annoyed by noise. 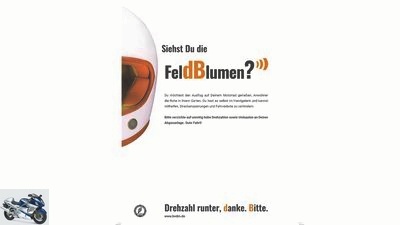 An appeal also goes to them Motorcycle manufacturer, To build significantly quieter machines and to the legislature to create the framework conditions for a sensible upper noise limit for all vehicles that is based on real driving behavior. Those who deliberately manipulate and deliberately cause noise must be consistently held accountable. “It cannot be that all motorcyclists are held in kin for a minority of black sheep”, said BVDM chairman Michael Lenzen.

It’s not against all motorcyclists 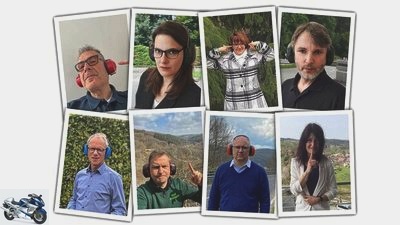 But the nationwide initiatives against motorcycle noise also benefit “Day against noise” to intensify their cooperation. The three largest interest groups are the motorcycle noise initiative from Baden-Wurttemberg, in which 158 municipalities and districts are united, then Silent rider with roots in many Eifel communities and membership focus in North Rhine-Westphalia and Rhineland-Palatinate as well as the residents’ initiative VAGM – United Working Group against Motorcycle Noise e.V., which represents the interests of affected residents at hotspots nationwide. “It’s not against all motorcyclists – but against the extremely loud and there are too many of them,” says Silent Rider spokesman Karl-Heinz Hermanns.

The initiatives feel that politicians have let them down. After 20 years of fighting the wanton noise, Holger Siegel, spokesman for VAGM e.V., is now calling for a Germany-wide model that puts pressure on manufacturers of loud vehicles on two and four wheels, but also tackles the conspicuously loud vehicle population. “After having been preached to us for years that this was a problem at EU level, the EU has now approved the Tyrolean model“.

The topic of motorcycle noise and noise as a whole cannot be discussed away. Those who cause noise have the strongest leverage. In the case of motorcycle noise, we motorcyclists. And an extremely large amount can be achieved with an adapted throttle hand. What is often missing is simply an understanding of the other side. This is where the campaigns start. In the long run things are only quieter together.