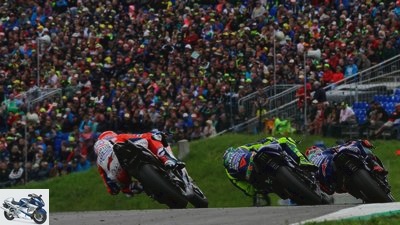 The ADAC has terminated the Sachsenring-Rennstrecken-Management GmbH (SRM) contract as the organizer of the Motorcycle Grand Prix Germany from 2019 on the Sachsenring.

Now the ADAC Sachsen is taking over.

For months it was unclear how and whether the MotoGP will continue at the Sachsenring, but now it is clear: the Sachsenring will remain the home of the motorcycle GP in Germany. The organizer is no longer the Sachsenring-Rennstrecken-Management GmbH (SRM), but the ADAC Sachsen. ADAC Sports President Hermann Tomczyk:

“With ADAC Sachsen we have a strong and reliable partner who has extensive experience in hosting motorsport events at the Sachsenring. Together with Dorna Sports, we have agreed that the Grand Prix will also be held at the Sachsenring in the future.”

The German MotoGP races have been held at the Sachsenring for over 20 years, and until 2011 also by ADAC Sachsen.

The SRM would like to make it clear with a press release that they “has fulfilled all the conditions for holding a motorcycle grand prix by Dorna Sports, the international rights holder of the motorcycle world championship, at all times and can continue to meet them in the future. What cannot be fulfilled are the additional conditions required by ADAC Munich, which are part of the contract between SRM and ADAC Munich.”

Both the management of SRM, as well as its shareholders and the Free State of Saxony emphasize in the press release that they will continue to campaign for this, “that the Grand Prix 2019 and beyond can be held at the Sachsenring. To this end, we will immediately start talks with Dorna Sports.”

The 2018 Motorrad Grand Prix Deutschland is not affected by the cancellation and, as is known, is to take place from July 13th to 15th at the Sachsenring.

In addition, for legal reasons, no information will be given about the content of the contract between SRM and ADAC Munich.