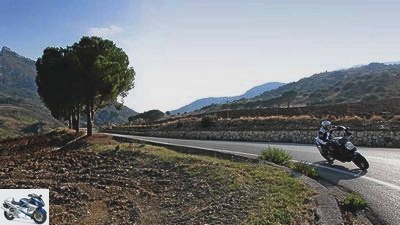 The Aeolian Islands off the coast of Sicily are not without good reason the seat of the fire god Vulcanus: The earth lets off steam from many holes here, and the Stromboli volcano is one of the most active in the world – a spectacular spectacle observed from the saddle of a Vespa.

The Aeolian Islands are not necessarily a typical destination for motorcyclists, but a trip to the volcanoes is a fabulous experience.

Arrival: Anyone who has already been to Sicily should definitely plan a detour to the Aeolian Islands. Ferry boats leave Milazzo for the islands several times a day. A passage to Lipari costs around ten marks per person, the prices to the other islands are similar. Travel time: The most beautiful time on the islands is spring when the flora is in full bloom. In July and August it is very crowded because of the Italian holidays, the prices are then around 30 percent higher. Spend the night: As soon as you leave the ferry you are offered cheap private accommodation on all islands. The double room is around 50 marks. Otherwise you can ask about accommodation in the bars at the harbor. At the Tourist Office in Lipari City (Corso Vittorio Emanuele 202) there is also a room certificate for all islands. There is camping on Lipari (in Lipari town in the youth hostel and in Canneto) and on Salina (in Rinella – Leni). Further information: State Italian Tourist Office ENIT, Kaiserstrabe 65, 60329 Frankfurt / Main, phone 0 69/23 74 30, fax 23 28 94. Activities: On Vulcano, it is essential to climb the edge of the Gran Catere. In the Valle dei Mostri there are bizarre lava formations. On Stromboli, a hike to the active volcano is tempting, a unique spectacle at night. Tours with a mountain guide are arranged by the Uffizio informationi in Piazzale San Vicenzo on Stromboli. Motorbike rental: A Vespa costs around 35 marks per day; prices vary slightly from island to island. The landlords do not allow you to be taken to other islands. The rental station Roberto Foti on Lipari has good scooters, phone 00 39/90/98 12 35 2, fax 98 11 62 7. Except in the main travel season it is also unproblematic to get a scooter on site. Literature: It is very good Aeolian Islands travel guide from the DuMont travel paperback series for 19.80 marks. A good map of the Aeolian Islands is available on a scale of 1: 25000 on all islands (Carta Turistica e Nautica). Time required: about a week’s distance: 120 kilometers