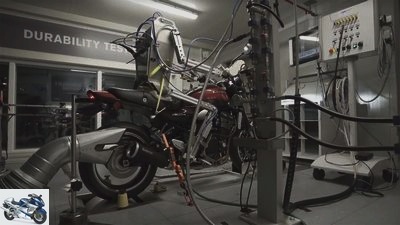 Exhaust system manufacturer Akrapovic has set up a new test bench for the durability tests of its exhaust systems. The endurance tests are driven by a unique robot driver.

Retrofit exhaust systems not only have to sound great and be optimally matched to the respective engine, they also have to last as long as possible. Akrapovic has so far relied on countless kilometers of road and racetrack for these long-term tests. Now this work is largely done on a new longevity test stand under controlled conditions. These tests are driven by a robot driver.

Endurance tests without a break

With the new test bench runs, various parameters such as power, exhaust back pressure and temperatures can be called up in every driving and load condition. However, tests on the road and on racetracks are still carried out as Akrapovic values ​​the impressions of real drivers very much in order to perfect every single exhaust system.

The fully autonomous 200 kW longevity test bench has its own automatic refueling system. This means that it is no longer necessary to stop the motorcycle to refuel, and it also enables extensive long-term tests to fully assess the durability of each exhaust system. The motorcycle is “driven” by an automated robot with a throttle valve actuator developed in-house. A person as the rider of the bike is therefore not necessary.

The test bench can run at defined speeds and running cycles in order to simulate a complete mileage. This chassis test stand with a complete set of cameras and sensors has sophisticated measuring devices that enable an extremely wide range of durability tests. 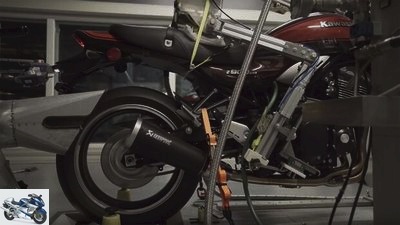 Exhaust systems can be tested for durability under laboratory conditions on the test bench.

It can also work at wind speeds of up to 200 km / h. It is also equipped with a ventilation system that uses the heat from the motorcycle engine in cold weather to heat the incoming air. In addition, the electrical energy generated by the motorcycle under load is fed back directly into the system. Akrapovic also offers its partners and manufacturers the use of this new test bench.