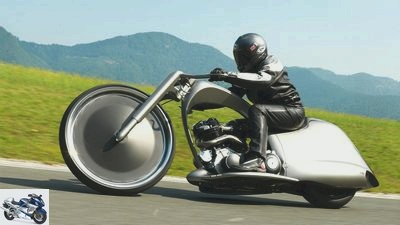 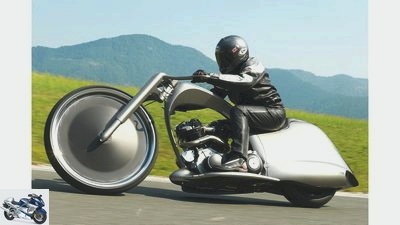 1/12
A front wheel that looks like the moon, a pneumatic chassis that replaces the side stand, and a brake that decelerates at the front and wears off at the rear. The question comes up: … 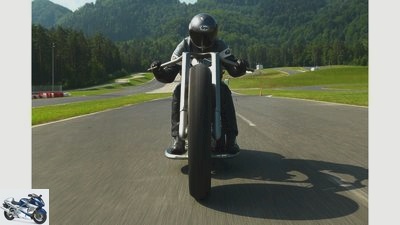 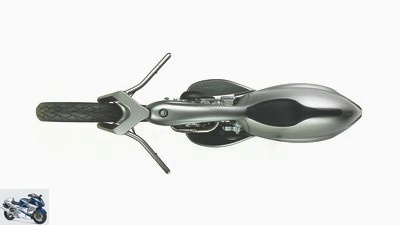 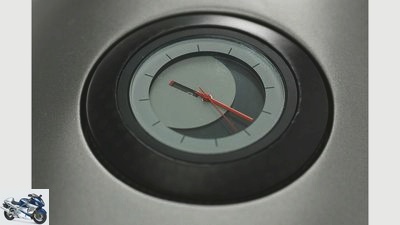 4/12
Only the nine-liter monocoque tank has a fitting. 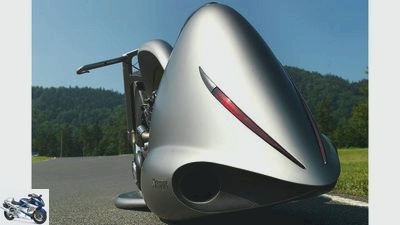 5/12
The lush fairing houses the exhaust pipes, the rear itself looks like the face of an alien. 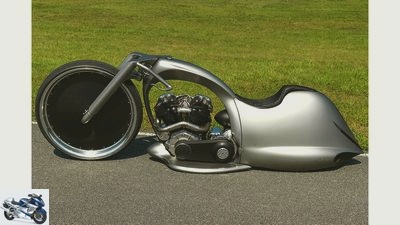 6/12
The streamlined design benefits enormously from the clean look. 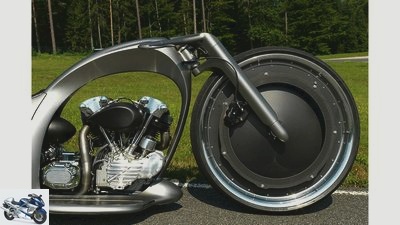 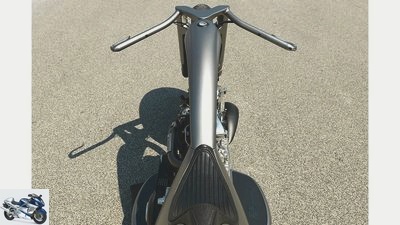 8/12
Cables or Bowden cables can only be guessed at from above. 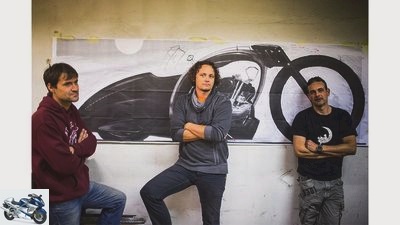 9/12
… Dreamachine Motorcycles around their boss Tomaž Capuder (center), who, like the manufacturer Akrapovic, comes from Slovenia. 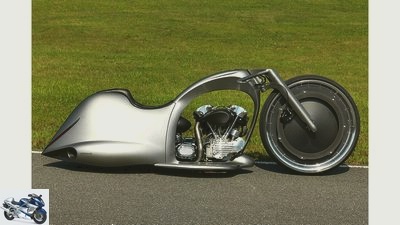 10/12
The Full Moon was designed and built in just three months. The company is responsible for this … 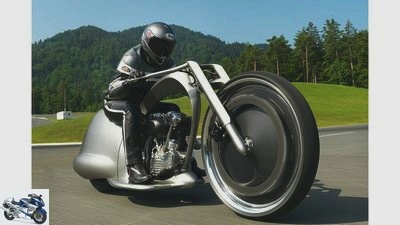 11/12
… “Should the Full Moon be catapulted straight back into space?” We are looking for answers. 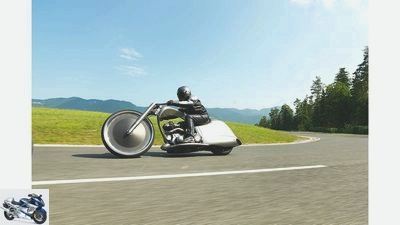 A front wheel that looks like the moon, a pneumatic chassis that replaces the side stand, and a brake that decelerates at the front and wears off at the rear. Should the Akrapovic Full Moon be catapulted straight back into space?

The unobstructed view of this mechanical work of art from the command bridge leaves you speechless. The upper body leans forward so much when driving that you believe that the front tire will rub your chin off at the latest when the next bump is reached. No speedometer or tachometer, no on-board computer or Bowden cable disturb the view ahead. The only thing that towers in front of you like a monument towards the sky is an unbelievable 30 inch rim diameter. Believe it or not, this massive yet elegant motorcycle, which owes its name to the look of its front wheel, actually drives – even if it’s actually a show bike from exhaust manufacturer Akrapovic.

More than 800 hours of work went into the Akrapovic Full Moon, which is finely crafted down to the last detail, in the middle of which is a 1,524 cubic centimeter 45-degree V2 engine from S&S tinkering. Both the invisible single-loop frame with integrated nine-liter monocoque fuel tank and the elegant single-sided swing arm with streamlined body are made entirely of steel. They all integrate two tailor-made Akrapovic exhausts that are connected to one another via a pipe.

“The bike itself is essentially an exhaust”

“The bike itself is essentially an exhaust,” says company founder Igor Akrapovic with a grin. “We wanted to intensify our advertising for cruiser exhaust systems. To do this, we needed something that would surprise people. The Akrapovic Full Moon more than served this purpose. Throughout the year it stood right next to Rossi and Lorenzo’s MotoGP rockets at exhibitions and trade fairs – and yet the visitors only looked at the Full Moon. ”

But is this motorcycle presented last December at the custom bike fair in Bad Salzuflen more than just a clever marketing measure? Can you maybe do a little lap with the two-meter wheelbase giant? The builder and company owner of the Slovenian manufacture Dreamachine, Tomaž Capuder, personally chauffeured the Akrapovic Full Moon to the state traffic training area near Ljubljana on this day. Not only because of the lack of license plate holders, riding on public roads is out of the question. The arrival of the cruiser specialist already makes that clear. Capuder doesn’t fold down an ordinary side stand to park the motorcycle, but grins proudly behind his right leg, fiddling with the body to press the button for the battery-powered air compressor. One click and the Full Moon with its huge, integrated running boards carefully sits down on the asphalt – pneumatically! A moon landing on the street, so to speak.

A clear case of goosebumps acoustics!

One inevitably thinks that last night’s absinthe is only now developing its hallucinogenic effects. But the Slovenian gives the all-clear: “First we installed a double swing arm. With that, however, we had too little space for the compressor and the air reservoir. So we constructed a single-sided swing arm to put the pneumatic system on the other side of the rear wheel. It was unimaginable for us to spoil this imposing body with a disgraceful side stand. Therefore the pneumatic strut and the telescopic fork. “

No sooner has the starter button been pressed behind the right calf than the Akrapovic Full Moon comes to life with an unbridled, bass-heavy tube. A clear case of goosebumps acoustics! At least now, the bike is living up to its marketing function. Because it is a little strange when an exhaust manufacturer has a show bike made with no exhaust to be seen except for the end caps, right??

The right hand lever has no function

If you are looking for the gear lever on the Akrapovic Full Moon with your left foot, you will look for it in vain. Contrary to expectations, the left hand lever does not operate the clutch, but the brakes. The clean look was the top priority for the guys from Dreamachine. And since the Bowden cable for the throttle grip and the brake line did not fit into the handlebar tube together, the brake moved to the left side of the handlebar.

The right hand lever was only installed for visual reasons and has no function. Form follows function. The handbrake lever controls the composite braking system derived from a rally setup – there is no brake pedal – with a 70 to 30 percent split between the concealed 250 millimeter steel disc on the rear wheel and a solid 660 millimeter carbon disc on the front wheel. Yes, you read that right, the front disc of the Akrapovic Full Moon measures a proud 66 centimeters in diameter. The 3.5-inch wide front wheel rim, which carries the brake disc and is padded with the VeeRubber from Thailand in specification 140 / 40-30, was made from a stately 65-kilogram piece of aluminum. In contrast, the six inch wide rear wheel rim carries a more ordinary Dunlop D407 in 200 / 55-17. How is that going??

With 49 hp forwards gently and powerfully

The engine is running, we’re ready to go. You press the button on the right end of the handlebar and the first of six gears engages. The clutch does its job fully automatically. With the upper body leaning forward, you carefully open the gas, and the Akrapovic Full Moon, which does not have a speedometer or rev counter, pushes forward gently and powerfully with a maximum of 49 hp. Now find the upshift button with your left hand, press it. And – clack – the second gear is there. As with modern sports motorcycles, you can simply leave the gas on. Just click and the next gear slips into it.

Because of the long gear ratio of the gearbox, you can only make it into fifth gear on the practice area. Which is actually too much of a good thing. Because as soon as you can see just a slight bend over the tank, which is perfectly painted in silver, it’s time to drop anchor. But that’s easy to say with a cold carbon brake. As with the MotoGP bikes, the carbon stoppers must first be up to temperature in order to be effective. Sure, you could always easily put the pistons on the carbon disc while driving. But with a composite brake system with a steel disc on the rear wheel, this is more likely to be smoked than the front brake is on temperature.

You give in – and nothing happens

Somehow you still manage to slow down the Akrapovic Full Moon in good time – cornering begins. But different than expected: With a maximum incline of 20 degrees, you can forget about the first targeted line. And the second choice of line also ends up in the bin: The gyroscopic forces of the 30-inch front wheel are beyond the imagination of what was previously understood by the term understeer. You give in – and nothing happens. Or only very little. And pretty late too.

A real challenge – not only for the running boards scrabbling on the floor, but also for the elasticity of the human upper body. But here one should allow grace to be given before justice. After all, you are piloting a show bike that is actually more than just an advertising measure for V2 exhausts. Together with Dreamachine, Akrapovic has created a motorcycle that is not only visually interesting. With regard to the pneumatic chassis and the fully automatic clutch, the Akrapovic Full Moon also gives an outlook on the possible future of two-wheeled construction. Chapeau!