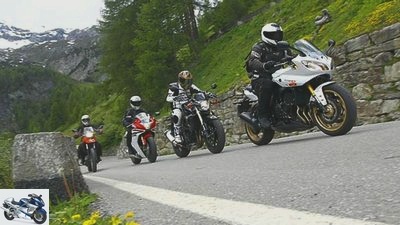 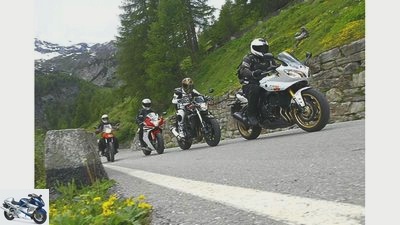 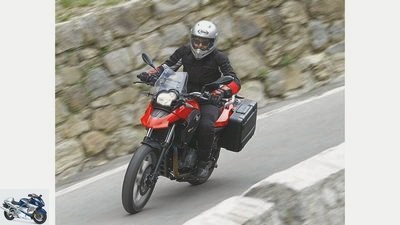 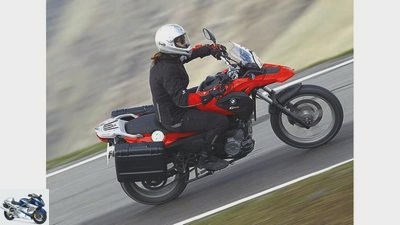 3/14
Economical natures will be pleased with the low fuel consumption of the BMW G 650 GS, but its processing looks cheap. 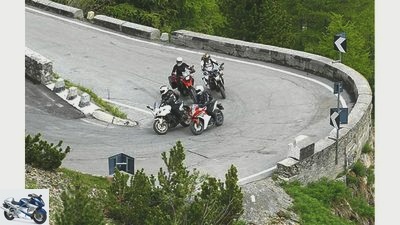 4/14
All-rounder at the Alpine Masters 2011: All four motorcycles do well on Alpine roads. 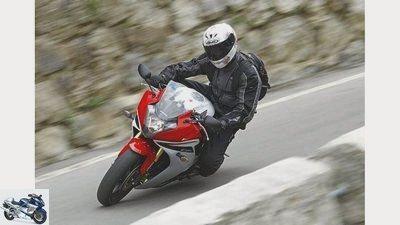 5/14
The chassis of the Honda CBR 600 F is mature and harmonious. When pulling through, the four-cylinder weakens in the mountain air. 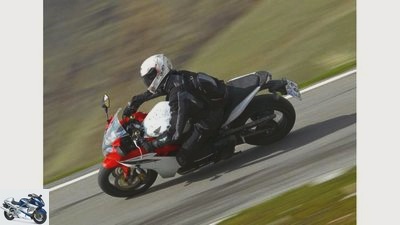 6/14
Honda CBR 600 F: You sit relaxed and thanks to good brakes you can really decelerate. 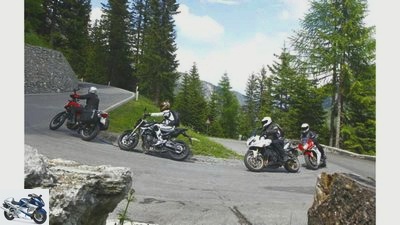 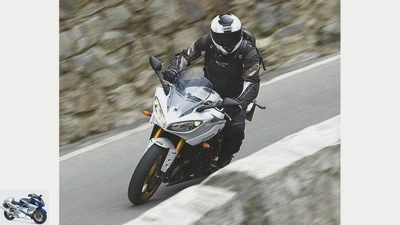 8/14
The Yamaha Fazer8 stands out due to its careful workmanship, good ergonomics and unfortunately also relatively high fuel consumption. 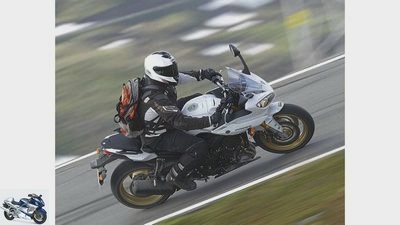 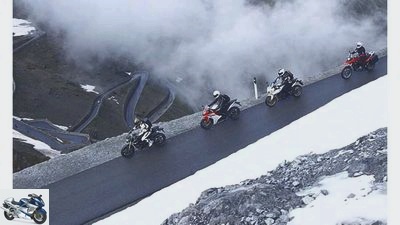 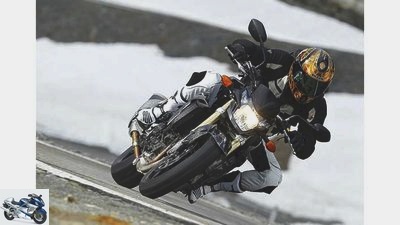 11/14
The Suzuki GSR 750 is a lot of fun. The spirited engine is largely responsible for this, although its throttle response is slightly nervous. 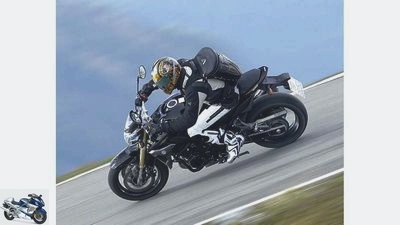 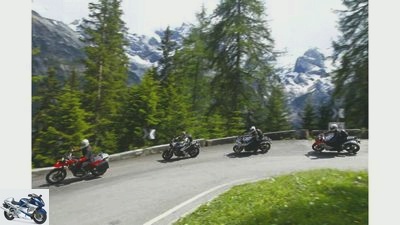 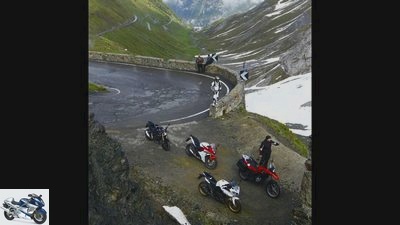 Things get tight at the Alpine Masters not only in the turns of the Stilfser Joch, but also in the test field of the all-rounders: All four motorcycles do well on Alpine roads, but show very different strengths and weaknesses.

The mere sound of the name tingles in the stomach, the heart beats faster, the pupils dilate. Hardly any other pass triggers such strong adrenaline waves in motorcyclists as the Stilfser Joch, this high alpine temptation carved in stone. But be careful: the yoke takes its toll on some overly sedate motorcycles, as the countless broken clutch and brake levers on the edge of the 48 hairpin bends show. However, it is ideally suited as a playground for light and agile all-rounders such as the boyish BMW G 650 GS, the sporty Honda CBR 600 F, the spirited Suzuki GSR 750 or the elegant Yamaha Fazer8.

So that the little GS catches up with the competition in terms of price, it comes with a lot of equipment including suitcases and thus conquers a small point advantage in terms of luggage storage. That’s just right and cheap, because as a stew it has to fight off three four-cylinder engines. What can your 48 HP be compared to more than 100 horses? A surprising amount. In the bends on the Stelvio Pass, the enduro with its high handlebars and upright seating position makes a big plus. Heavy traffic with cars, mobile homes, bicycles and what feels like millions of motorcycles make it seldom possible to choose the perfect line for the switchbacks on the test weekend. But while many a big bike wobbles dangerously all around, the 650er can be willingly turned in even from the most impossible starting angles and climbs almost weightlessly upwards. Despite the short first gear, it pulls evenly when accelerating out of the bends and turns bravely – even with a co-driver, for whom it provides a very comfortable place to stay.

If it were all about the performance on the Stilfser Joch, the little GS would be unbeatable, because it gets hold of things “Handiness on mountain passes” A whopping 19 points and thus marks the absolute record in the entire 2011 Alpine Masters. But the wonderful world of the Alpine passes is not just made up of serpentines.

In longer, steep passages, the single cylinder loses its strength, as does the quick alternating curves as the test lap progresses. In addition, the brakes could grip better and soften downhill too soon. In the end, the little GS only came last in terms of points. Still: hats off to her great climbing skills.
That shows the Yamaha not so pronounced. With its perfectly cranked handlebars and relaxed seating position, it would actually be easy to maneuver through tight turns – if, yes, if the engine would play along. But first gear is too long, in every serpentine the Fazer demands patient play with the clutch and still does not really get out of the pots. It only starts abruptly after 6000 tours, but then the next bend is already there and it is time to brake. The stoppers work great, the ABS regulates well, the braking system does not show any weakness even downhill, not even with a pillion passenger. He finds a comfortable, albeit slightly soft, place on the back seat, can hold onto the large handles at the back and also lean on the bulbous tank, which significantly relieves the driver. On well-developed alpine roads, the tour for two turns into a pleasure-focused wagging around curves. However, it gets tight on bumps like on the Umbrail, because then the Fazer’s undercarriage, which is too soft at the rear, breaks through all too often, even in solo operation. 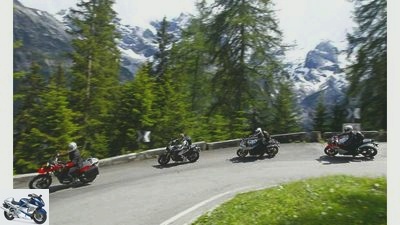 The Suzuki GSR 750 is carved out of significantly harder wood. Her stiff chassis guarantees a good mood on brisk passes, and her bearish 750cc four-cylinder already pulls in from below. Boredom never arises with it, thanks to the wide and relatively high handlebars, it drives even tight turns easily and playfully. Even the passenger sits surprisingly relaxed on the narrow cushion. No doubt, the GSR with its riot outfit feels right at home on mountain routes and looks like the sure winner – only to fail on details.

Among other things, this is due to Suzuki’s tight austerity measures, which withheld an ABS. It should come in late summer, but that doesn’t help the current version. When measuring the brakes downhill, she needs 29 meters, around four more than her competitors. In addition, its hard set-up on undulating slopes such as the Umbrail tempts it to jump, which temporarily tarnishes the driving pleasure as does the somewhat nervous throttle response, which often requires easy clutch assistance in the serpentine vortex on the Stelvio Pass.

The Honda needs it CBR 600 F rarely. Although her four-cylinder only really gets into a cheering mood from 6000 rpm, what pushes further down from the lower rev range is enough to smoothly and lightly thwart bends. Despite the clip-ons, the Honda doesn’t feel as sporty as it looks, which is mainly due to the relatively upright seating position, but also to the astonishingly large steering angle. And last but not least, the ergonomics, which are perfect for drivers of almost any size. All levers are within easy reach, course corrections due to stuck motorhomes succeed by themselves. The sophisticated chassis offers the most adjustment options in the test field and continues to play its winning qualities on the fast descent from the Umbrail, simply ironing away bumps in the asphalt and allowing the driver to do so to indulge in the corner frenzy. The ABS regulates pleasantly late even on steep inclines, the brakes grab boldly, but not too bitingly. Thankfully, you notice the amazingly good wind protection on draughty pass heights. The passenger is enthroned quite high up, but can rely on proper suspension reserves and good handles. Little by little, the resistance of the competitors is waning. The CBR 600 F is a Honda made of real shot and grain, with it it slips that crucial bit better on alpine passes – it can reach the finals.

A field with strong characters, ultimately dominated by the Honda CBR 600 F, which looks sportier than it feels and – very real Honda – can do almost everything a bit better in the Alps than everyone else. Second place went to the spirited Suzuki GSR 750, which failed due to the lack of ABS, while the comfortable Yamaha Fazer8 struggled with its soft chassis in the mountains. Consolation prize for the last-placed BMW G 650 GS: It won the title as the absolute serpentine queen of the 2011 Alpine Masters.