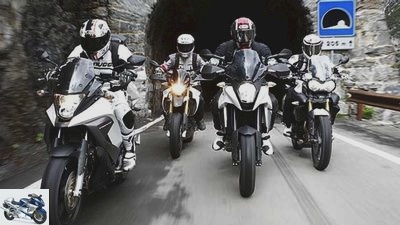 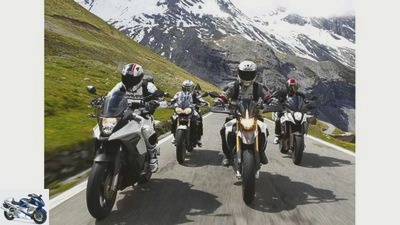 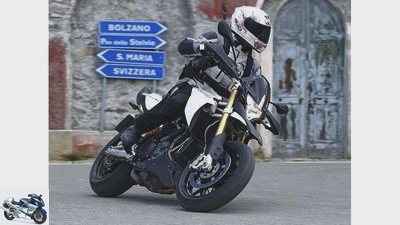 2/15
The engine of the Aprilia Dorsoduro 1200 offers a lot of torque and smooth running. 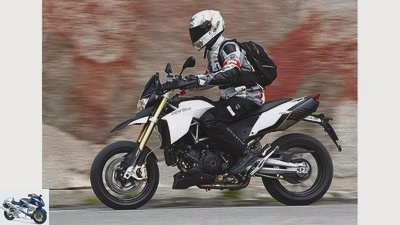 3/15
The Aprilia Dorsoduro 1200’s performance on the mountain is great. 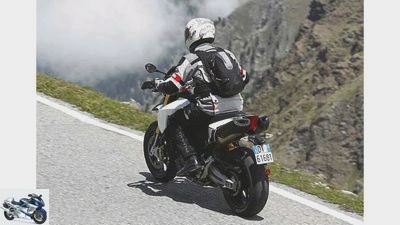 4/15
Aprilia Dorsoduro 1200: The sitting position is uncomfortable, the brakes are very effective.

However, the ABS allows stoppies. 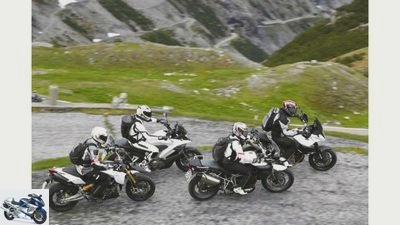 5/15
Which fun bike delivers the most fun in the alpine environment?? 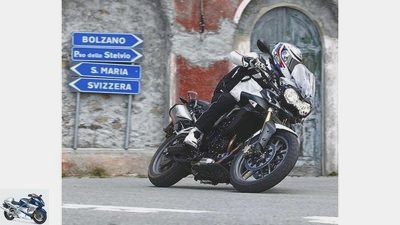 6/15
The three-cylinder engine of the Triumph Tiger 800 delivers strong and even torque. 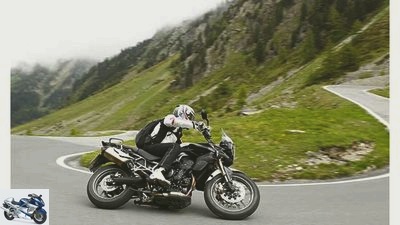 7/15
Triumph Tiger 800: The lean angle is somewhat limited, the seating position is comfortable. 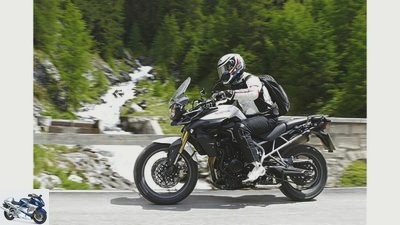 8/15
The brakes of the Triumph Tiger 800 require a lot of manual force, the steering behavior is neutral and transparent. 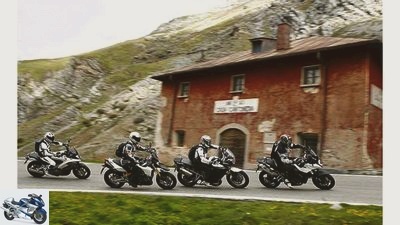 9/15
Fun bikes in an alpine comparison test. Does the local KTM have the edge here?? 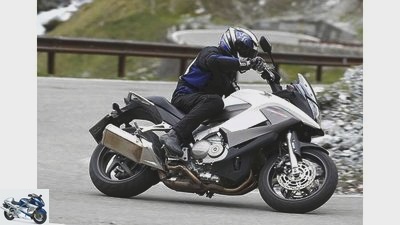 10/15
The V4 engine of the Honda Crossrunner weakens with moderate draft from below. Range and brakes are great. 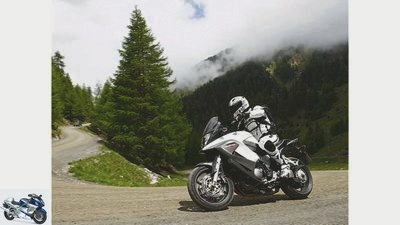 11/15
Honda Crossrunner: The seating position takes getting used to, the chassis responds comfortably, but it is overwhelmed on bad terrain. 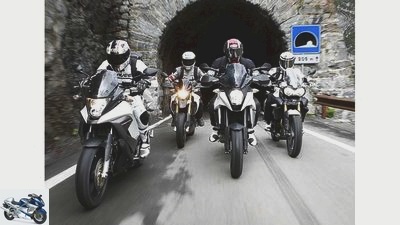 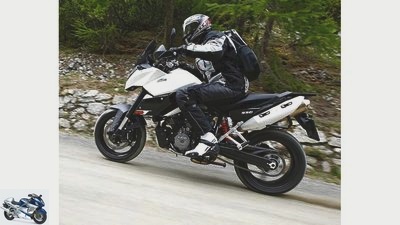 13/15
The two-cylinder engine of the KTM 990 SM T is easy-revving and powerful. However, the unit jerks at low speeds. 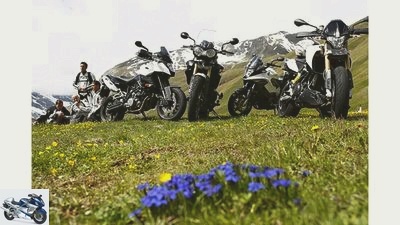 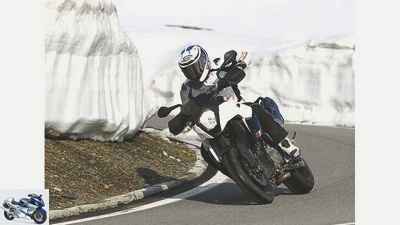 15/15
KTM 990 SM T: The chassis is great, but the suspension is too soft when fully loaded. The brakes are great and the ABS is great.

Instead of real big boobs, four current representatives of the fun society are fighting for advancement in the Enduros / Funbikes category this year. Toys that also want to convince with a wide range of uses and good everyday properties. Which of the fun bikes has the edge in the end: the mid-range all-rounder or the crisp supermoto racer?

So much was clear from the start: Once again, the long-legged bike segment is the hotly contested class, and there is plenty of excitement on offer here. Whoever wins this category can – like the R 1200 GS last time – expect a good chance of overall victory in the grand finale. At the start this year: Aprilia Dorsoduro 1200, a large supermoto with great entertainment value. Honda Crossrunner, a crossover concept that seems to have been made for the diverse requirements in the mountains. KTM 990 SM T, the lively touring supermoto, which now calculates even better chances with ABS than its predecessor without an anti-lock device, which only just failed at the 2009 Alpine Masters. And finally the Triumph Tiger 800, which as the new protagonist of the mid-range funbikes could follow in the footsteps of the two-time overall winner Suzuki V-Strom.

The fact that the last place in such a strong field does not have to be perceived as a disaster may be little consolation for the Aprilia. Its strength is clearly the powerful, dull thundering motor, which pushes with power from the lowest revs and thus gives it full points for the two pull-through criteria. In addition, thanks to its lush flywheel masses, the 1200 V-Twin has a lot of smoothness and character, which is particularly advantageous when the engine speed is often low in the countless hairpin bends of the Stilfser Joch. The only flaw in the engine: The mapping does not seem fully developed, and the fuel consumption is correspondingly high. The ride-by-wire throttle response should also be smoother.

But what you can get used to rather than the high, angular seat and the low handlebars. And the chassis, which you would describe with a healthy degree of hardness on level ground, brings you back to reality on the bumpy slope of the Umbrail down to Switzerland. You have your hands full not to take an unplanned off-road break before the regular gravel passage. After all, good brakes, including ABS, help in emergency situations, which, however, cannot completely suppress the slope for a forward somersault downhill.

Weaknesses that the ABS has in the Crossrunner does not perform. In general, the Honda stoppers are beyond any doubt, can be finely dosed and, in an emergency, compress the machine hard even downhill if a collision with a startled marmot is to be avoided. In this respect, the Crossrunner meets the high expectations of the testers.
Unfortunately, this does not apply to the chassis. If it was able to convince in the top test on level slopes, it does not quite live up to expectations under difficult alpine conditions. Although it is soft and comfortable, the Crossrunner just hangs too low on the ropes. There are few reserves left on the undulating sections. This does not only apply to heavy loads, the Honda reaches its limits even in solo operation. Surprising weaknesses, because firstly, the restless steering and the poorly balanced balance is anything but typical for Honda. And secondly, the CBR 600 F shows with the all-rounders how well even technically simple spring elements can work without many adjusting screws under difficult conditions. In contrast, earlier tests indicated that the ergonomics that take getting used to with sharply bent knees are not helpful in the Alps. 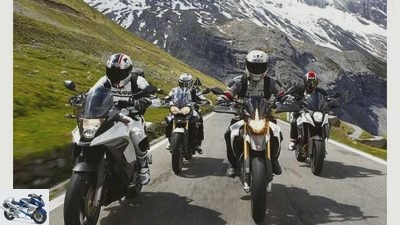 The drive also reveals light and shadow. On the one hand, he speaks gently, which is extremely helpful in view of the switchbacks. On the other hand, the V-Tec-V4 doesn’t seem balanced. Downstairs he runs out of breath on the mountain, which the measured values ​​for the acceleration on the mountain reflect only inadequately, as the short geared second gear whitewashed the problem. At the top, the 800 certainly offers sufficient pressure. But if you want to behave somewhat civilized here, but still don’t want to starve to death uphill, you inevitably have to use the medium speed range. And that’s exactly where the blaring switching noise at 6000 revs when the V4 switches from two-valve to four-valve operation is annoying.

So two hopeful candidates in the battle for class victory have said goodbye prematurely, and there is a close duel for the top spot between two fundamentally different approaches: KTM 990 SM T and Triumph Tiger 800. Machines and engines with completely different characters. Here the impulsive KTM-V2, which rushes up the mountain with really good taste, there the gentle three-cylinder, which convinces with its undemanding nature. Sure, the measured values ​​speak for the strong two-cylinder, which, however, appears a bit unbalanced when the engine is slow. Nevertheless, it is noteworthy how much running culture and manners the Austrians have instilled in their former predator. With its superior power, the SM T can develop a lead in the engine standings – but the Triumph stays tuned. Because the Tiger convinces in the alternating curves below the Umbrail pass with neutral steering and wonderful lightness. Sure, the fork could respond a little more finely to bumps.

But it is crucial that the basic set-up fits. Even the worst corrugated iron does not upset the Triumph chassis. What can not be said of the KTM. It inspires on level asphalt with outstanding handiness and firm suspension, but strong bumps bring a lot of life to the steering.

There would have been a stalemate in this group, had it not been for two criticisms of the little Tiger that tipped the balance in favor of KTM. The brake is too blunt, especially when loaded downhill. The KTM, which is fine-tuning along the stoppie line, can do that by classes better. And with this a committed driver does not have to worry about parts touching down in an inclined position. The fact that the Triumph can turn off the ignition in an inclined position via the side stand switch is more than a faux pas, that should be changed as soon as possible. So this is how the KTM triumphs and is allowed to represent its category in the final. 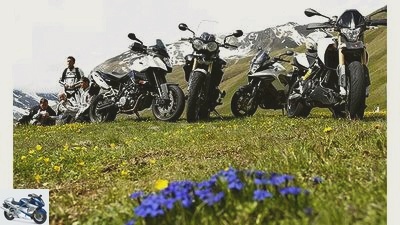 One outsider, three contenders for victory: The Aprilia is missing all-round qualities despite the great engines, that was not entirely unexpected. On the other hand, the fact that two hopeful candidates faltered came as a surprise. The Crossrunner turned out to be too slack on the chassis and unbalanced on the mountain. And the Tiger weakens when braking and makes a bitter blunder when it comes to the lean angle. In the end, the KTM triumphs 990 SM T with a lively drive, crisp chassis and great brakes.