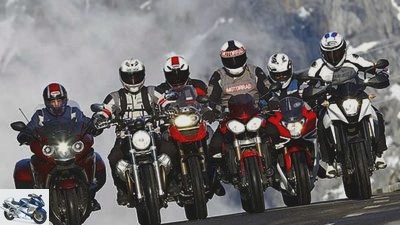 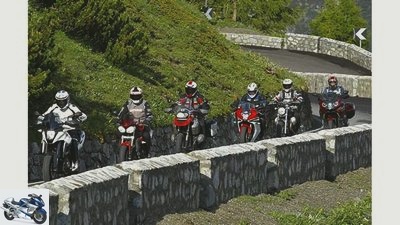 1/25
These bikes made it to the finals of the 2011 MOTORRAD Alpine Masters. 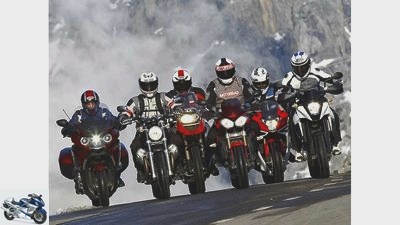 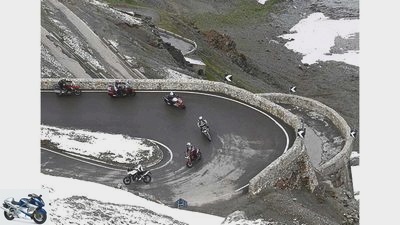 3/25
The Stilfser Joch in Italy with its 48 hairpin bends is by no means a typical alpine pass. 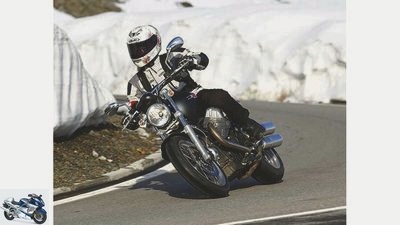 4/25
Moto Guzzi Bellagio: The retro bike from Italy is already a wobbly candidate in the first lap. 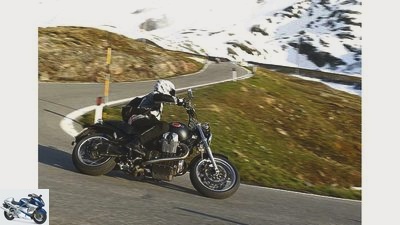 5/25
The Moto Guzzi Bellagio dominated the retro bike class in the Alpine Masters. 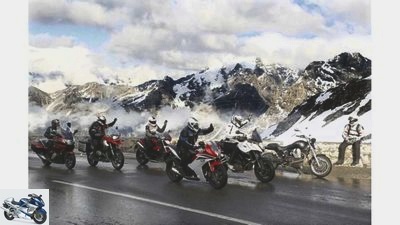 6/25
Six of the seven jurors say goodbye to the Moto Guzzi Bellagio at the first pass, only one would have preferred to leave the BMW K 1600 GT here. 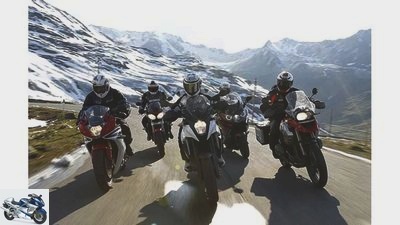 7/25
These five bikes went into the next final round. 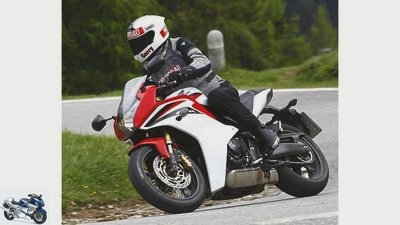 8/25
Honda CBR 600 F: The machine with the smallest displacement in the final needs to be twirled properly so as not to lose touch. 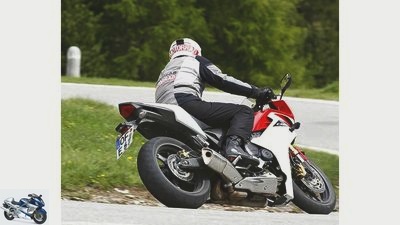 9/25
Eva complains about the Honda CBR 600 F: “The eternal switch shop and the high speeds are annoying”. 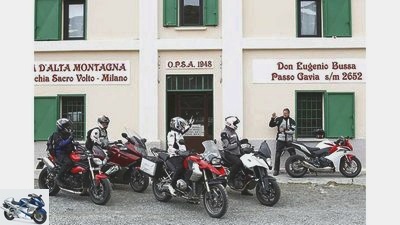 10/25
Sayonara Honda CBR 600 F, you represented Japan worthily. With typical Honda qualities. But on the steep climbs to Gavia there was unfortunately not enough smoke to keep up with the big ones. 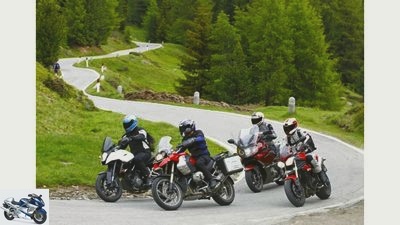 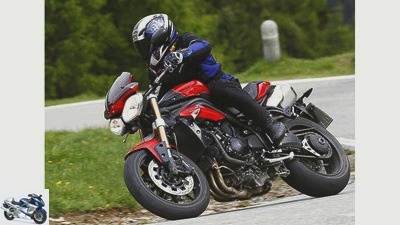 12/25
Karsten complains about the stubborn chassis of the Triumph Speed ​​Triple and turns out a few clicks of the pressure damping. That brings something, but the Triumph is still not a sedan chair. 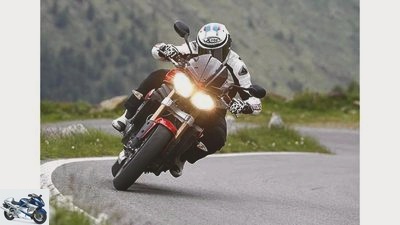 13/25
In this final round, the exclusion election fell with four votes for the Triumph Speed ​​Triple. 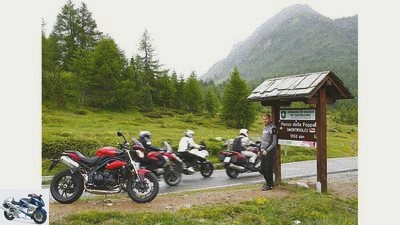 14/25
Bye-bye, Triumph Speed ​​Triple, the English weather was to blame. Sports tires in the rain and cold, that just doesn’t fit. But one would also have liked to have done without British hardness in the chassis here and there. The engine, however, is convincing everywhere. 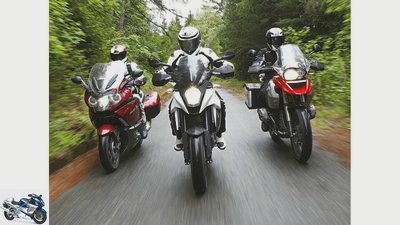 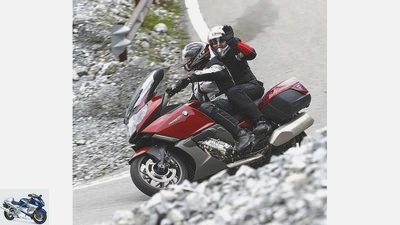 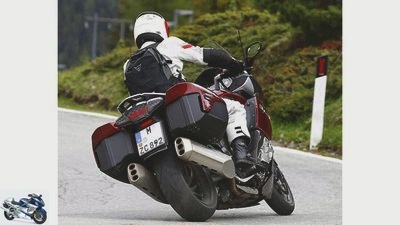 17/25
BMW K 1600 GT: Incredible handling and endless torque were enough for a place on the podium in this finale. 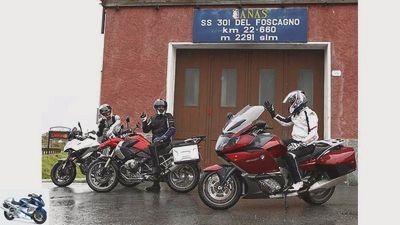 18/25
Pfuat di BMW K 1600 GT, you deserve your place on the podium. Not only because of the weather protection and the great features. 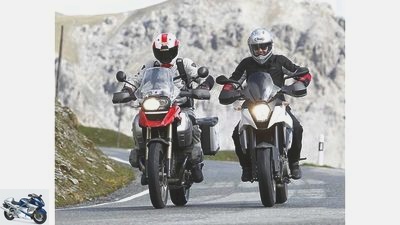 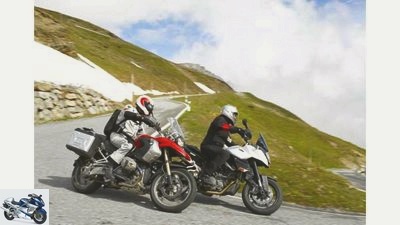 20/25
The two travel enduros from BMW and KTM did not make it easy for the judges. 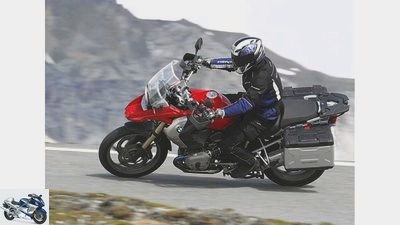 21/25
The BMW R 1200 GS can demonstrate its all-round qualities especially on the last stretch, the ascent to the Umbrail with the entire spectrum of roads and slopes. 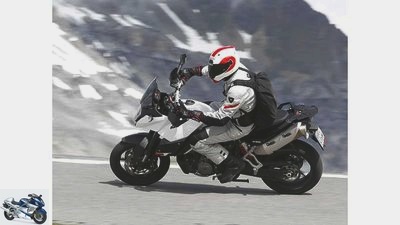 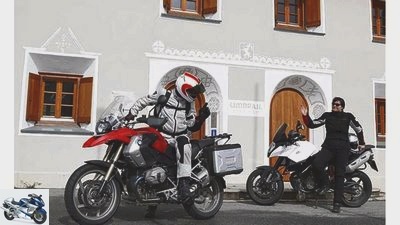 23/25
Hello KTM 990 SM T, thanks for a close fight. Stalemate at the Ofen Pass, the decision is made at the Umbrail. In the end, just one more vote in favor of the BMW R 1200 GS, the KTM returns from the Alps with its head held high. 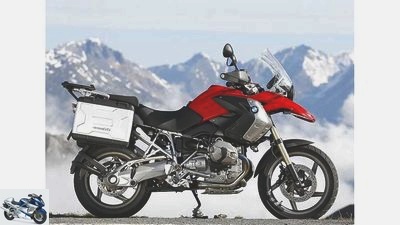 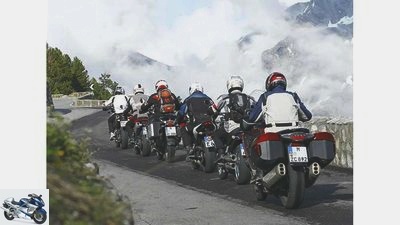 Whether a stylish classic bike, mid-range all-rounder or touring steamer :. At the final, the winners of all groups have to pass the most beautiful passes in order to find this year’s overall winner at the end of the day. Who can beat last year’s winner BMW R 1200 GS? Or defend their title?

Same procedure as every year: Unfortunately, this does not only apply to the course of the Alpine Masters, but also to the capricious weather. As in 2010 in the Dolomites, the test crew on the Stilfser Joch is fighting with rain, cold, wet roads and even snow. For a good week you chased every tiny hole in the clouds. But now, on the day of the decision, at breakfast at 6.30 a.m., a clear blue sky, the Ortler in glaring sunlight – madness. So quickly washed down the coffee, hastily thrown in the breakfast roll and quickly slipped into the suits – waterproof textile suits of course, you never know.

The five group winners and the defending champion, the BMW R 1200 GS, are already waiting in the hotel car park. Six ingenious machines that promise a sunny day full of fun and enjoyment. The tour leads over passes with a wide variety of characters. The rules of the game are clear to everyone: The points of the preliminary rounds have been deleted, from now on the knockout process continues, a total of seven referees decide. At each pass, the jury, made up of experienced test professionals, selects a motorcycle that has to say goodbye to the battle for the title. The field is gradually thinning until the winner has been determined at the end of the test round.

Starting from the hotel, the steep eastern ramp of the Stilfser Joch is the first, tough touchstone. A unique switchback festival with steep straights, a tough test for a 600 meter. Will it hit the CBR first? She wants to be swirled out of the hairpin bends properly so as not to lose touch. On the other hand, it is surprising how elegantly the battleship BMW K 1600 GT manages the meanest hairpin bends. The engine pulls ahead violently from 1000 revolutions, the steamer steers completely easy. It seems clear that the two enduros, GS and SM T, just like the powerful Speedy, don’t have to worry here. Against it is Bellagio a wobbly candidate, although she dominated her category brilliantly. After many stops, constant swapping of machines and extensive comparison drives, Karsten at the top of the yoke hands out the papers for the first round of voting. The result: Six jurors selected the Guzzi, one of them would like to part with the K 1600 GT here. Whether it is Gerry who complains about the heavy weight and enormous dimensions of the GT?
We continue down the west ramp of the Stilfser Joch towards Bormio. Still bright sunny weather, wonderful. The troop enjoys the grandiose panorama, the fantastic combinations of corners with great grip. Here you can give the machines spurs. The powerful bikes with a sporty set-up and crisp handling are in their element here, especially Triumph and KTM. The SM T convinces even Kristijan, who actually prefers quiet locomotion: “You sit so relaxed and everything is so easy.” 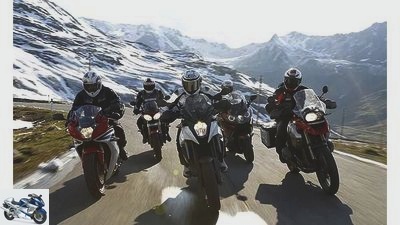 The Moto Guzzi Bellagio retro bike was the first to be chosen from the final.

Impressions that could quickly be put into perspective. Because in Bormio the entourage turns to Passo Gavia. And it has a different character than the rugged Stilfser Joch. The narrow strip of asphalt surprises again and again with narrowing curves and tricky alternating combinations. The roadway has been re-paved over large parts in recent years, but in between there are always passages that are in a desolate condition and that place great demands on the chassis.

That shouldn’t worry the agile CBR with progressive suspension. Or is it?? “The eternal switch shop and the high speeds are annoying”, stated Eva when she came from the CBR to the Speed ​​triple changes. The Triumph also loses a lot of its sovereignty here, Karsten complains about the stubborn chassis and turns out a few clicks of the pressure damping on the shock absorber. That brings something noticeable, but the Triumph is still not a sedan chair.

The next round of voting is already on the barren pass of the Gavia. Short process, no discussions, you can be sure. Karsten collects the papers, four testers kicked out the CBR, now two would part with the GT.

While the ascent to Gavia was more of a driving challenge, the descent into the valley is a real pleasure. You can’t get enough of the magnificent landscape. It is difficult to concentrate on the job, the machines. Surprisingly, a group of ibex appears directly at the roadside, which doesn’t seem to be bothered by the motorcycles. But it is precisely here that concentration is the order of the day, on the sometimes secluded, narrow street it becomes tight even for a motorcycle when there is oncoming traffic. And you know that: Cars always come at the wrong time.

Down in the valley the sky is visibly darkening, on a wide road the squad, decimated on four bikes, rolls through the valley. When it comes to eating kilometers, the two BMWs are unbeatable. Andrea praises the six-cylinder. A motorcycle like from another planet, more comfort is not possible. The travel qualities of a GS are well known. The repertoire of the KTM SM T doesn’t quite offer the bandwidth, but at least the driver sits relaxed and rudimentary wind protection is also offered. In contrast, the Speedy is more sporty and Spartan.

The junction to Passo della Foppa is easy to miss. A small, idyllic pass in the forest, on which only a few tourists get lost, at this time of the year it is practically a car-free zone. A paradise for the two enduros, who can easily be steered through the tricky combinations of corners and collect points here again for the next round of voting. At the pass, the judges crowd under the narrow roof of the passport sign for the voting round, because at this moment the expected rain sets in.

Election supervisor Karsten announces the result: three votes fell for the K 1600 GT, four for the Speed ​​Triple, uff, narrowly for the Triumph. The rain probably played a role in this, because with sports tires, hard suspension and a slightly delayed throttle response, the Speedy did not leave a convincing impression on the last few kilometers in the wet. 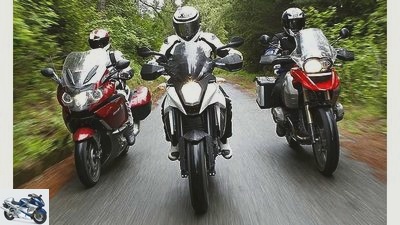 So pig for the BMW six – for now. The rainy stage from Passo del Foppa via Bormio to Passo di Foscagno is more like a connecting stage. Nobody wants to stand in the rain for long at the customs control for the Livigno free trade area. Just tick the box and continue – but without the big touring BMW. But with its incredible torque and unbelievable handling, it even impressed sports freak Sergio.

So now the defending champion against the challenger, BMW against KTM – in pouring rain. The test team has now passed Livigno, is back in Switzerland through the Munt-la-Schera tunnel and is approaching the Ofen Pass. It could all be so beautiful – it wouldn’t pour out like buckets here. Crisis meeting in the restaurant “Susom Give”. Test boss Thole makes a tentative attempt to move forward to the final rating. A good two hours later the decision is made: cancel, continue here the next day.

The next day, the GS can show what it can do. Especially on the last stretch, the ascent to the Umbrail with the whole spectrum of roads and slopes, it can prove its all-round qualities. What the KTM is still missing: a little more ride comfort, a little more equipment, better handling characteristics with a load and in the wet. But it counters in good conditions with more driving pleasure, more direct steering and better handling. The result is the closest possible result: four to three, one vote more for the old and new king of the mountains, the BMW R 1200 GS.