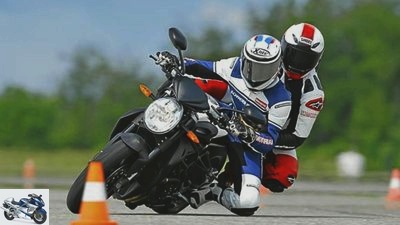 Alpine Masters 2011 This is how MOTORRAD tests

Alpine Masters 2011
This is how MOTORRAD tests

In front of the mountains comes the plains: on the flat former military airport in Neuhausen ob Eck, all machines are first put through their paces, measured and tested, because the limit area cannot and should not necessarily be explored in the mountains.

Two people ride the circular track and slalom, after all, in the Alps you are often fully laden with passengers and holiday luggage. For other measurements, however, you absolutely need the mountains. For example, a special draft measurement on a particularly steep passage of the Stilfser Joch between turns 28 and 29 is very informative. Here – also with a pillion passenger – the car accelerates from 25 to 75 km / h in second gear. Tourers and enduros achieve consistently good values ​​here thanks to powerful engines or a short gear ratio, while the weaker all-rounders struggle on the mountain. The K 1600 GT delivers the best value with the high-torque six-cylinder.

In the opposite direction, the braking measurement takes place downhill at the same point. A pretty nasty test for brakes and ABS, because here, in addition to the steep gradient, there are also friction coefficient jumps and bumps. It is noticeable that some machines – Aprilia Dorsoduro, Moto Guzzi Norge and Kawasaki Z 1000 SX – tend to stoppie, which actually hardly have any problems with it on the flat. With others, such as the KTM SM T, the rear wheel sticks to the ground despite the snappy brakes.

The longest braking distance of the Suzuki GSR 750, the only machine in these groups without ABS, shows how important ABS is under such conditions. Even professional brakes Karsten Schwers cannot achieve better values ​​without an anti-lock device. With good ABS, even an inexperienced driver can do this.
High up, below the Stilfser Joch in the direction of Bormio, the passage from 50 to 100 km / h is measured in the last gear. The high altitude should reflect the influence on the engine performance. The single cylinder of the BMW G 650 GS, which thanks to a short gear ratio still does well when accelerating out of the hairpin, has to surrender here due to a lack of power, whereas the Tiger 800 does astonishingly well.

And finally, the consumption is determined on a set test round. Dorsoduro and Norge in particular turned out to be drunkards, while the G 650 GS only fed half. The only 15-liter tank forces the Aprilia to the gas pump every 200 kilometers, which should never be forgotten in view of the thin supply network in the mountains.