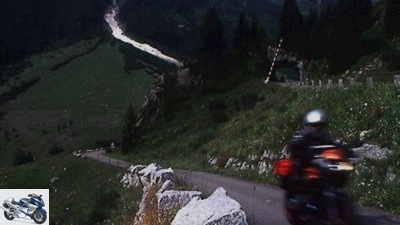 Alps
The dream of endless curves

A motorway connects Lake Lucerne with Lake Maggiore. But who cares about a direct connection from A to B in the mountains?

The heart of Switzerland is an exclusive refuge? five francs fifty for a cappuccino is a word.

Normally I would thankfully forego a break. But this view of Lake Lucerne, whose rippled water surface is surrounded by mountains like a fjord and which is said to be the most Swiss of all lakes because it is historically particularly valuable, really has it all. Here the small alpine country presents itself arranged to perfection.

School knowledge that has long been out of date comes to mind. The nearby Rutli meadow, the Swiss sanctuary par excellence, because the Swiss Confederation was founded here over 700 years ago to get rid of the tiresome foreign rule once and for all. It was Schiller who then made use of this material with his ?? Wilhelm Tell ?? ?? the Robin Hood of the Alps, so to speak? knitted a Swiss heroic epic. I only remember it faintly. It’s been a while. Here you are guaranteed to know the book by heart. 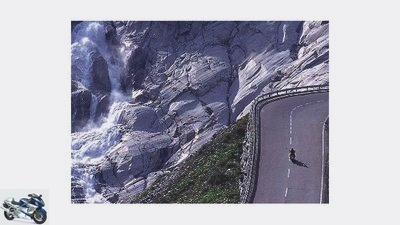 Back on the road. Along the east bank of the lake. Weggis, Brunnen, Sisikon, Altdorf. Fantastic residential areas high above the water, private beaches, luxury hotels, expensive cars, fast boats. Everything posh. And above everything there is an elegant calm. Just as sophisticated as on Lake Maggiore further south. It’s around 80 kilometers from bank to bank. Beeline, of course. On the practically dead straight motorway, well, almost at least, this route would be feasible in a good hour. The alternative: a selection from the upper league of mountain roads, which in this part of the Alps practically merge into one another. Those in a hurry would go mad just looking at the map ?? on my route you will probably not stop for two days in the Italian seaside resort of Cannobio. But that’s exactly how I imagined it. Curves and hairpin bends drive to the stop.

The route climbs for the first time south of Altdorf. At first barely noticeable, finally pretty fast through the valley of the foaming Reuss to Wassen. Right here, and ?? oops ?? the first tight bends: the east ramp of the Susten pass. From now on it goes almost vertically upwards on a route carved into the inclined rock. Huge waterfalls rush over high steps in the stone, branch and unite, form fine spray mist, in which the light of the sun is refracted in many colors. Isolated snow fields shine further up.

The Swiss Alps are fantastic terrain for corner robbery. Particularly great: the region south of Lake Lucerne, where some of the highest mountain roads line up.

getting there
Lake Lucerne can be reached quickly via several motorways (vignette required). From Basel the A 2 leads to Lucerne; If you are coming from Winterthur, head for Zurich and take the A4 (just keep in the direction of Gotthard) to Kussnacht, which is right on the lake. From the Swiss border, of course, the side roads offer significantly more driving fun. They also save the fee for the vignette, which costs EUR 26.50.

Travel time
Who can, should avoid the holiday month of August and the long weekends (Pentecost or May 1st) ?? Because of the heavy traffic, driving fun is guaranteed to fall by the wayside. From June, sometimes even in May, the mostly more than 2000 meter high Swiss passes are open to traffic again after the winter closure. For many alpine fans, however, September and October, when the leaves are already changing color, are the best time to go around the Pass. From November at the latest, there will be a winter break on the passes described in the text.

accommodation
Hotels and pensions can be found in practically every place in the entire Alpine region. Motorcyclists are heavily courted everywhere. If you are not traveling with a larger group in August, you do not need to reserve, but can easily find a room anywhere, depending on your mood (and tiredness). Unfortunately, Switzerland is an expensive place? Hardly anything goes below 60 francs for a single room. Our tip: »Hotel Hof & Post «in Innertkirchen, which is located between the Susten and Grimsel passes. A single room costs from 60 francs per night. With a shady beer garden, really good cuisine and a special overnight offer for motorcyclists (two nights with half board 100 francs per person); Telephone 0041/33/9711951; Internet: www.hotel-hof-post.ch. Other hotels recommended by motorcyclists can be found in the “Pleasant Quiet” section (see next pages). General information: Switzerland Tourism, phone 069/2560010; Internet: www.schweiz-tourismus.de.

literature
Still the bible of every alpine fan: »The great alpine road guide« by Denzel, 21st edition. Almost all alpine routes are described in great detail, ISBN 3850477630, for 36 euros. The smaller edition “Eastern Alps” is more suitable for tank bags, with 75 tours in the central and eastern parts of the Alps, ISBN 3850477614, 34 euros. The issues of the MOTORRAD Edition Unterwegs for 16 euros each are highly informative for trips to the Alps. While the first three volumes of the Alps each work their way through as many neighboring countries as possible, the most recent works “Austria” and “German Alps” have a limited focus. The handy volume »Alpen ?? der Westen «from the series Traumstraben Tour Guide by Louis for 9.95 euros. It briefly describes ten alpine tours. For digital friends there is the »MOTORRAD Tour Planner 2003/2004« with the most beautiful routes in the entire Alpine region. You can print out maps of tours you have planned yourself or of 350 suggestions. Can be ordered for 39.95 euros at www.motorradonline (shop). The best maps for the tour: Shell Euro map “Switzerland” in a scale of 1: 303000 plus general map “Northern Italian Lakes, Milan, Turin” in 1: 200000. 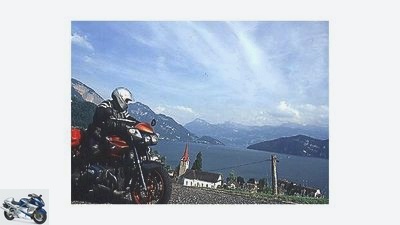 Shortly before the 2224 meter high pass a tunnel, directly behind the exit the obligatory restaurant and a huge parking lot. But unfortunately not a panorama that even remotely tempts you to stop. Around 300 meters further on, on the first downhill bend, I almost knocked me out of the saddle of the BMW Rockster, the Sustenhorn and the garish ice flow of the stone glacier, whose meltwater has formed a gray lake there, are so huge. A picture of superlatives that extends in front of these ultra-wide handlebars? and into which the street leads right into the middle.

As far as Innertkirchen, I let the BMW roll downhill relatively calmly, treat myself to a short break before the asphalt stretches up into the sky again through an increasingly inhospitable valley. Right, left, right ?? the Grimsel Pass gets down to business pretty quickly. Simply fantastic, this winding course, which catapults me back to high alpine terrain in no time at all. I pass granite formations polished by former ice masses, then the first reservoir, the Raterichsbodensee, shortly afterwards the Grimselsee, over which the Hospitz watches over a rock. What a residential area! 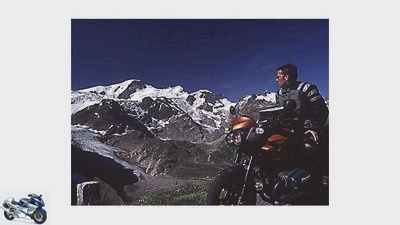 Unfortunately, from here there are only four hairpin bends to the top of the pass at 2165 meters. What a shame, was just really in the swing of things. But looking back is a revelation. I look at a granite world at the foot of the 4274 meter high, snow-covered Finsteraarhorn and a little further down at the two green shining lakes. The spectacular course of the route is easy to see ?? Weekends are guaranteed to be extremely hectic here. In contrast, no more than two handfuls of motorcyclists came towards me in the last hour. In the middle of the week, the route hardly seems to attract anyone. I still remember it well. At the beginning of May in the Dolomites. The streets are clogged up to the point. For the umpteenth time I swore to myself that I would avoid the weekends in the Alps.