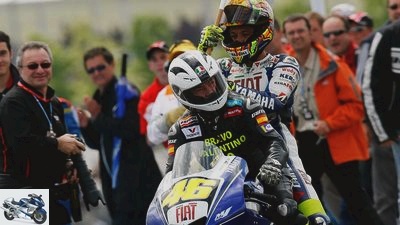 Angel Nieto is dead
The head injuries were too severe

He fought for his life for a week after a quad bike accident in Ibiza. August 3rd is the “12 plus 1-time world champions” now succumb to his injuries. The Spaniard was one of the greats.

With Angel Nieto, the motorcycle world lost one of its greatest heroes again in 2017. And like Nicky Hayden in Italy at the end of May, the Spaniard Nieto was now the victim of a tragic traffic accident in Ibiza.

Angel Nieto, born in 1947, competed in the top class of Grand Prix sport for 19 years, won 90 Grand Prix and stood on the podium 139 times. With his racing successes in the 50 to 125 cubic classes, he made his home country Spain one of the dominant motorcycle racing nations to this day. Angel Nieto never mentioned the proud number of his world championship titles, namely 13, out of superstition. Instead, he always referred to himself as “12 plus 1 times champion.”

In his obituary, Grand Prix organizer Dorna Angel Nieto “ranks in the annals of motorcycle history alongside names like Giacomo Agostini, Valentino Rossi, Mike Hailwood and Phil Read.” Quad dies is a cynical irony of history.

Even two days after his serious quad accident, the former motorcycle world champion Angel Nieto is still in an artificial coma in the intensive care unit of a hospital in Ibiza. Doctors call the traumatic brain injury severe, but describe the 70-year-old Spaniard’s condition as stable and under control.

Regarding the still open question of whether or not Angel Nieto was wearing a helmet at the time of the accident, the “Diario de Ibiza” reports in its current online edition that the motorcycle world champion did wear one. But when his quad was rammed while braking by a Fiat driving up from behind, his helmet was thrown off his head when he fell.

Because Angel Nieto did not want to pronounce the number 13, it became his trademark to describe himself as “twelve plus one times motorcycle world champion”. His closest family members are said to be in hospital with him, according to Spanish media reports.

According to information from the “Diario de Ibiza”, Angel Nieto suffered a severe traumatic brain injury and is now in an artificial coma one day after the accident.

The “Diario de Ibiza” describes the course of the accident as follows: Nieto was on a quad bike. A 38 year old woman from Germany drove behind the world champion in a Fiat 500. She apparently did not notice that the quad was slowing down and rammed Nieto from behind. Information on whether or not the ex-world champion was wearing a helmet in the accident is currently still contradicting itself. An alcohol test carried out on the woman was negative, reported the daily newspaper “El Pais.”