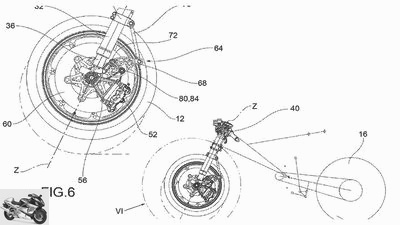 1/7
The Piaggio subsidiary Aprilia has patented a mechanical anti-dive system. 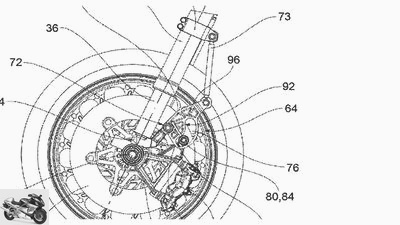 2/7
A corresponding patent specification has now been published in the USA. 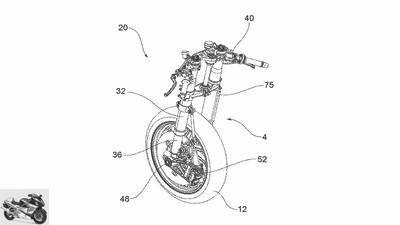 3/7
According to the patent, the system should only be adapted on one side of the fork. 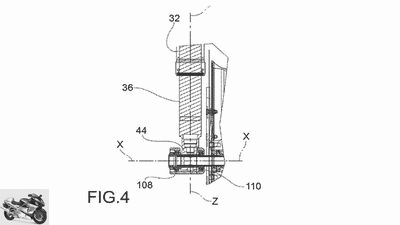 4/7
The brake caliper is rotatably mounted around the wheel axle. But here it is only a matter of a few degrees. 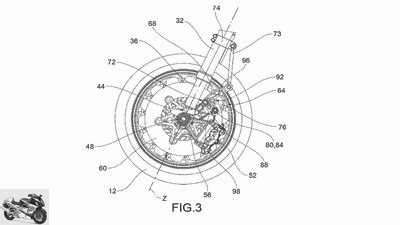 5/7
The brake caliper is also connected to the dip tube in an expandable manner with a deflector and a push strut. 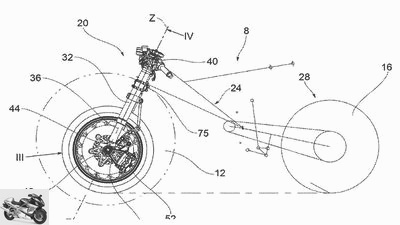 6/7
The resulting braking torque is used to brake the fork in the immersion movement. 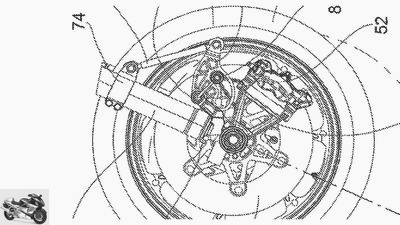 7/7
Presumably, the anti-dive system will initially be used in racing. Later possibly also on series machines.

A patent was published in the USA in which the Italian motorcycle manufacturer Aprilia deals with a mechanical anti-dive system.

Motorcycles that are equipped with conventional telescopic forks – also in an upside-down design – are submerged at the front when braking thanks to the dynamic wheel load distribution. With this immersion, the steering geometry changes and the suspension hardens. As a result, bumps can no longer be safely absorbed and the front wheel can lose ground contact and grip. In addition, the rear wheel is relieved and here too, in extreme cases, ground contact is lost.

To avoid this, telescopic forks must be adjusted so that they do not break through under full braking load. As a result, the hard spring required for this and a correspondingly tight compression damping worsen the response behavior and spring comfort. And that although this tight coordination is almost only required when braking, while it is rather annoying at constant driving speed or even when accelerating (very little dynamic front wheel load) on bumpy or bumpy surfaces.

With modern damping systems in forks that can be regulated in different compression speeds (high and low speed) and / or progressively wound fork springs, this problem has largely been eliminated, but not entirely. The new electronically controlled trolleys offer further options. Fork constructions such as the Telelever from BMW or forks based on the Hossack principle have already integrated an anti-dive effect, which uses the braking torque for support, but are criticized by many drivers because of the corresponding perceived decoupling from the front wheel.

In the 1980s, Japanese manufacturers in particular began to build anti-dive systems on their motorcycles. In racing machines, mechanical systems were used in which the brake calipers, which can be rotated around the wheel axle, are supported on the fork by means of thrust struts. However, these systems increased the unsprung masses and the moment of inertia around the steering axis. In the production of motorcycles in series, manufacturers rely on hydraulic systems. Controlled by the brake, they increased the damping in the fork and thus reduced its compression speed. The suspension comfort mostly fell by the wayside. Ultimately, none of these systems has prevailed. 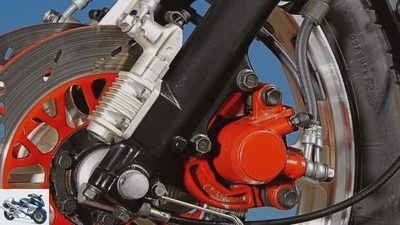 Now the Piaggio daughter appears Aprilia to take up the anti-dive approach again. A patent was published in the USA in March 2020 in which the Italians deal with a mechanical anti-dive system. Aprilia only provides the anti-dive system for one fork leg. There the radially screwed brake caliper, rotatably mounted only a few degrees around the wheel axis, is supported by a pivot lever mounted rotatably on the fork base and a likewise rotatably mounted push rod on the fork’s immersion tube. 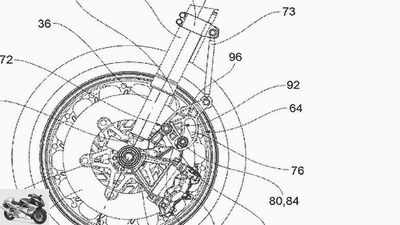 The geometry of the overall construction should be designed in such a way that the anti-dive effect decreases with increasing compression travel. This means that the maximum anti-dive effect can be called up at the start of braking. If the fork is immersed further, the effect is reduced so that the fork can fully fulfill its spring and damping tasks and ensure grip on the front wheel. The system characteristics can be influenced by simply exchanging various components or by shifting the pivot point on the fork. 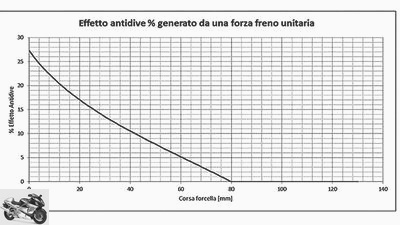 The representation of the system in the patent indicates a possible use in MotoGP or other racing series. Later on, the anti-dive system could also appear on production motorcycles, if it comes at all.