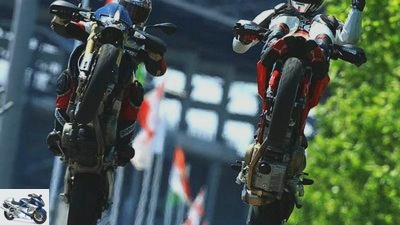 The Aprilia SMV 750 Dorsoduro and the Ducati Hypermotard 1100 are optically and conceptually dedicated to the supermoto idea. How do the two aspirants interpret the topic?

Who sets the sporty accents? Which of the two can win sumo wrestling? ring free!

All supermoto or what? What used to be the dirty corner of combined on-road and off-road sport is now for sporty motorcyclists ?? and those who want to sell them motorcycles ?? always more interesting. Crisp optics, powerful engines and playful handling were the outstanding features of the single-cylinder supermoto. Although V2 engines now dominate the niche outside of the motorsport arena, manufacturers continue to adhere to these old sumo virtues, which is why two-cylinder sumos are enjoying growing popularity. The latest addition to the scene is Aprilia SMV 750 Dorsoduro, which has a competitive price of 8599 euros plus additional costs on their 2646 euros more expensive competition, the Ducati Hypermotard 1100 falls.

?? At her with a roar ??, thinks the new one and is already very combative in terms of looks. Not too aggressive, yet sporty styled, the SMV 750 looks like a serious attacker. Its flat tank-seat line, the sleek headlights and the mufflers integrated in the rear promise burner quality. In contrast, the Hypermotard looks more like a salon lion: its smooth, shiny red surfaces seem made for ice cream parlor displays, less for hearty country road brawls. 750 cubic meters of current mechanical engineering against 1100 cm³ of old-school technology, four valves against two, valve springs against desmodromics, drive-by-wire against cable-operated throttle valves. Aprilia modified the twin used in the SL 750 Shiver only slightly and implanted it in the Dorsoduro. The injection has changed mappings (three different modes are available), and the secondary transmission has been shortened by two teeth. Also the Ducati is traveling with a second-hand engine: your twin did before ?? exceptionally with wet clutch ?? in the Multistrada service, and in the decades before that as a 1000 in the Supersport models. The Hypermotard falls back on the Ducati typical dry clutch. 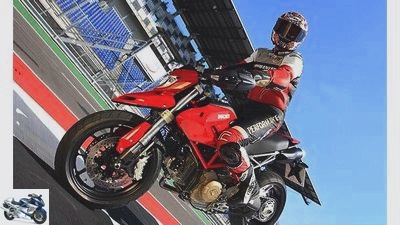 Worth a sin: Ducati Hypermotard 1100.

Gong for the first lap, tap open, and the idle whisper swells to a pithy twin-hum. The Aprilia pulls away cleanly in first gear, delivers its performance linearly and unspectacularly. Gear changes must be enforced with vigor, because the transmission of the test copy is not exactly the smoothest. When the Hypermotard was burning tight, it happened more than once that the gear change from 4th to 5th did not take place, an intermediate idle set in for a short time and the gearbox suddenly left again. Character in all honor, but a switch box shouldn’t work so stubbornly. The drive-by-wire system of the SMV 750 also takes getting used to. Although it has a throttle cable, it does not operate the throttle valve, but a potentiometer. The on-board electronics forwards its electrical signal to a servomotor, which then opens or closes the throttle valve. The thing that takes getting used to is that the SMV never accepts gas as one is used to: In map mode ?? S ?? (like ?? Sport ??) the throttle response is extremely hard and too aggressive. In mode ?? T ?? (like ?? Touring ??) the gas application is softer, i.e. acceptable, but noticeably delayed.

It is the best everyday mapping, but just as unsuitable for burning as the “S” map. Setting ?? R ?? is completely superfluous. (like ?? rain ??): It robs the already very uniform and therefore easily predictable two-cylinder 10 hp, transforms it from a hissing cat into a hoarse kitten. Such castration nightmares are alien to the Ducati. It delivers its energizing pressure from 3000 revs, but unfortunately from 6500 rpm it gets a bit tired and encourages early shifting. For this, the Hym likes to lift the front wheel in the first two gears and, typically sumo, invites you to small gimmicks. Despite their noticeable load change actions and the equally not smooth transmission, the first round on the subject of drive goes to the Ducati. Ring free for the second run, the undercarriages. This confirms the suspicion that the testers had already drawn in the chapter on the engine: The Dorsoduro may look sumo-like, but it doesn’t want anything to do with sport and tough duels. Even the damper tuning is a sufficient indication that a comfortable driving experience should be generated in addition to the smooth engine. This works extremely well as long as the SMV is not enslaved. Once put down? it is not exactly the handiest motorcycle? if it rushes precisely through bends, follows the targeted line and, despite its 6-inch rim, which is much too wide, does not allow holes and grooves to disturb it. But if there is a train on the chain or if a passenger is transported, the shock absorber quickly quits the service, goes to the block and waves the white flag.

Sporty or rather comfortable? 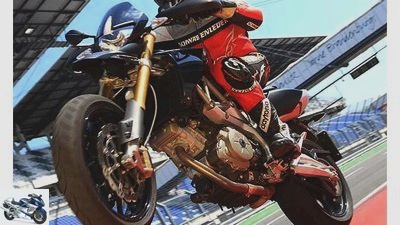 If you want to whiz through the Winkelwerk in a sporty way, the 1100 Duc is the right choice. Your chassis offers reserves for the sporty pace, even if the adjustment range of the shock absorber is not really large. However, the driver of the handy red one has to get used to one characteristic: it tilts into an inclined position as fast as an arrow, but then tends to collapse with the front wheel. So it does not run neutrally through the bends, but has to be kept from lying on the inside mirror with a little pressure on the handlebars. Fortunately, the current Hypermotard has Pirellis as its first tire; the tendency to collapse has decreased significantly compared to previous test candidates. The Hym is still not completely neutral. But the fork and the front brake are convincing. The Aprilia Brembos bite the windows a little more jaggedly, but it is not enough to snatch victory from the Duc in the second round.

Gong, third round: Time to give the Ducati a comfortable Aprilia. While the Hypermotard puts the pilot close to the handlebars and offers him hardly any space to work, the Aprilia invites you to do gymnastics: Comfortable, sporty and with a good knee angle, it ensures an active driving position. Both seat cushions are unbearable, however: The Aprilia has already sat through after 100 km, about 30 km before the tank lamp starts to shine. The upholstery of the Ducati is simply as hard as a board. Long tours are more likely to be something for the tough guys on both of them. Despite this commonality, the ergonomics round goes to the Aprilia: With the greater freedom of lean angles, it not only protects the pilot’s boots, but also footrests and levers. 2: 1 for the Ducati before it goes into the last round, the direct duel. Here it gets official: The Dorsoduro doesn’t want to be a sporty supermoto, but an all-rounder in a supermoto guise. She fulfills this role very well, but does not offer the ambitious country road hunter enough sporting potential. The Ducati, on the other hand, can really be subjugated. 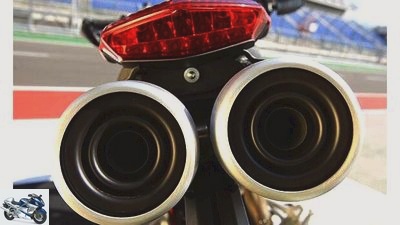 Googly eye, be vigilant! If you look too deeply here, you will not see the Hallelujah, but you will hear it clearly.

The Ducati Hypermotard 1100 has the newcomer, the Aprilia SMV 750 Dorsoduro, under control. This would look completely different if the SMV were tuned more tightly and the drive-by-wire functioned more homogeneously. but “if” and “Had” It is well known that they don’t count.