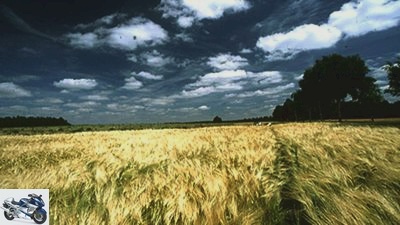 Around Hamburg
The high in the north

If you want to discover the Hanseatic cities and their surroundings, you sometimes have to wait a little for good weather. If it then happens, a trip to Nordland can really get under your skin.

Nothing can be seen of Hamburg. A single gray soup wafts over the city. A completely normal summer day in the far north of Germany. Tribute to the proximity to the sea and the steadily moving clouds from there. We northern Germans are used to it. But after four months in my new home, Korea, I would like to show my friend Yujin my old home and I had imagined the arrival to be different. Too bad. Despite everything, I can’t help but smile. Welcome to the bad weather in Hamburg, which I am all too familiar with. However, if I came here for the first time, I would probably turn back on the spot, as dreary as this city looks on such days.

The next morning everything is different. Sunbeams tickle our faces when we wake up, and a look out of the window promises a great day. Ideal to redeem the Yujin round promised in the plane around Hamburg. A quick coffee has to be enough, we can have breakfast on the way. Ratz, fatz we put on our motorcycle clothes and pushed the Aprilia Pegaso, which we had borrowed as a precaution, onto the street. Anticipation germinates? Even if it is always said that the far north is practically curve-free, it is not that bad after all. Only there are no passes. Yujin and I quickly reached the outskirts, where the transition to the farmland is rather abrupt. On a small branch line we roll to the Bredenbeker pond, around which a tree-lined sandy path leads. There is hardly any traffic yet, I just have to watch out for a few pedestrians who stare at us in surprise. Although the path looks like a hiking trail, it is a public road that ends near the magnificent Renaissance castle of Ahrensburg. The walls shine bright white in the middle of a huge meadow. There is a beer garden directly opposite, but it’s definitely too early for a beer.

Around Hamburg
The high in the north 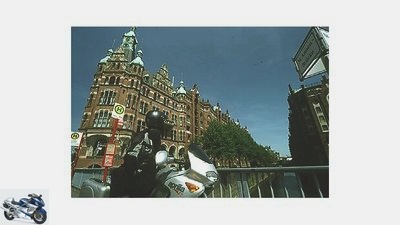 And so that is the famous Alsterwasser?

Slowly, however, the skipped breakfast is noticeable, and we get a few sandwiches for a picnic on the Schlosswiese. We stroll calmly through meadows and dense cornfields further west, passing Siek, Lutjensee and Trittau. Only at Wotersen do I hear a gentle protest from behind? Yujin pleads for a long overdue halt. The location is also well chosen. Directly in front of us is the baroque property, which was once used as the backdrop for the early evening series ?? The legacy of the Guldenburgs ?? served, the North German counterpart to the American Dallas. It’s gotten pretty hot now. Our hope that the wind will cool you down a bit turns out to be wishful thinking. Anyway, anything better than rain. We get to Grob Pampau via a small gravel road and set course for Reinbek. Actually, I wanted to invite Yujin to a princely lunch in the castle of the same name. But unfortunately the fine restaurant is closed on Mondays. As a substitute, so to speak, for the missed meal in a princely atmosphere, during the break in the Yujin Castle Garden I tell the German version of Romeo and Juliet that took place here at the beginning of the 19th century. The short form: noble son and miller’s daughter plan their wedding, but the father of the groom refuses the inappropriate connection. The young couple drowned desperately in the nearby Bille; Only the common burial in the Reinbek cemetery led to the longed-for unification. We inevitably have to smile, because Yujin’s parents weren’t really happy at first either when they found out about our relationship. Fortunately, their attitude has changed in my favor.

We swing again on the saddle of the Aprilia, roam through the Vierlande, an extensive marshland south of Reinbek. It was difficult to put the helmets back on as the temperature hasn’t dropped a degree. The wind ?? hot as the air from a hair dryer. Even the sheep in the meadows behind the Elbe dyke are too lazy to be scared off by the noise of the engines. Or have you got used to it? because the route leads to one of the top biker meetings in the Hamburg area: the Zollenspieker Fahrhaus. On weekends, the bear dances here so much that route closures have already been considered. Thank goodness the application flashed off at the city administration.

Despite its proverbial coolness, Hamburg is a warm metropolis with a high recreational value. Here are our tips for après-drive.

Worth seeing
Definitely the Reeperbahn. There is a lot going on there, especially on weekends, and there is a wide variety of entertainment. Hamburg’s landmark is the Michel Church, where the motorcycle service also takes place. The fish market in the harbor is also worthwhile. Tip: Sunday morning, when Aale-Dieter and Bananen-Kai grapple across half the market. Get up early because the fun ends at eight o’clock.

gastronomy
Original North German cuisine can be found in Brodersen in Gothenbaumchaussee 46 or in Friesenkeller on Jungfernstieg. Very special recommendation: the snack bar Strandperle on the Elbchaussee (difficult to find: turn left in the direction of Wedel and watch out for parked bicycles and bikes. This is where the footpath begins).

literature
The best book is Alex Rhets ?? “With the motorcycle around Hamburg” from Pauls Verlag. It is unfortunately out of stock, but it is occasionally available on ebay. For general reading, we recommend the Geo Spezial and the HB Bildatlas »Hamburg«. The general map on sheet 5, together with a city map, provides a good basis for orientation. 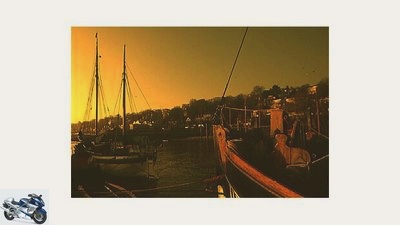 Of course that too – pure romance.

Even today it seems as if almost all north German bikers have rolled up. The mood is still completely relaxed. No speed orgies, no burnouts, but sweaty two-wheelers who only want apple spritzer and shade. The number one topic of conversation: the upcoming 21st Hamburg motorcycle service, which attracted around 30,000 motorcyclists to the Hanseatic city last year. Although the Zollenspieker offers extremely fine cuisine, we are looking for something else. Until the idea comes to me: off to the beach pearl! The Strandperle is a real Hamburg original. Actually just a small snack bar vis-à-vis the container port, but absolutely cult in Hamburg. Every space here is occupied, but that doesn’t matter, because the beach pearl doesn’t bear its name for nothing. So we grab Alsterwasser plus bockwurst with potato salad and make ourselves comfortable on the Elbe beach. Watch the hustle and bustle on the water and with a slight wanderlust the loading and unloading of the ocean giants in the container port on the other side of the bank.

We still want to go to the old country. The way there leads through the Hamburg warehouse district, and after a short time the heavy smell of coffee and exotic spices that are stored in the harbor warehouses greets us. Brick building in old Hanseatic architecture, we can hardly stop being amazed. Strangely enough, before I started motorcycling, I had no idea what was there to discover here. Countless bridges span the Speicherstadt canals, in which flat-bellied barges used to transport goods from overseas pots to the warehouses. 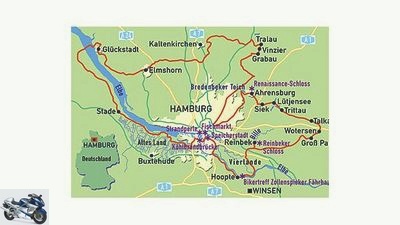 The route through and around Hamburg.

There are several ways to get to the Alte Land, and the one over the four-kilometer-long Kohlbrand Bridge, which has been connecting the western and eastern parts of the harbor since 1974, is by far the most attractive. The harbor with its loading cranes, ocean liners and container stores extends as far as the horizon. Small pilot boats and barges whiz in between. From no other place is the harbor more beautiful to look at. The main season of the old country is the time of the fruit blossom, when the huge fruit tree plantations shine in bright white and delicate pink. We are now taking advantage of the summer and stocking up on wonderful fruits at street stalls. A little chat with the farmer’s wife, and off you go. Along the southern bank of the Elbe and on the Gluckstadt ferry, we pass Elmshorn and Kaltenkirchen in the north of Hamburg, where the lush rapeseed fields are in full bloom. We switch to the smallest country roads and gravel roads that seem to guide us through a true sea in yellow. The sweet smell of the rapeseed blossoms almost makes you dizzy.

Evening is slowly approaching, and we have to steer the reins of our tireless warhorse back towards the metropolis. The way back leads past the wonderfully restored manor house of Tralau, on the wonderfully winding dirt roads between Vinzier and Grabau. In the evening light, the large wind turbines of the far north shimmer majestically. While we are blinded by the rays of the low sun, we return to the Hanseatic city.

The next day the drizzle is back. The respite from the onrushing ocean clouds was short. The crux of life in the far north of Germany. But when the sun shines, it somehow seems to shine brighter than elsewhere. As if she owed it to us.