Behind the presentation of its new Trail A40 and Sport-GT Evo 30 tires, Bridgestone continues its small internal revolution: redesigned range, shorter life cycle… The Japanese thus intend to stick as closely as possible to the expectations of motorcyclists and to offer products adapted to the latest generation machines…. 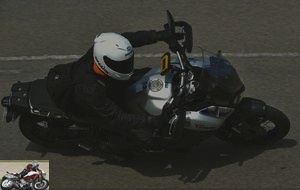 To say that Bridgestone’s expectations are huge with the new A40 is an understatement. First, the road trail segment has never been so competitive. Second, the A40 takes over from the BattleWing which is retiring after almost 10 years of loyal service … Logically, the A40 is much more efficient than its predecessor but must also overshadow its competitors direct: Conti Trail Attack 2 at Continental, Trailsmart for Dunlop, Michelin Anakee 3 or Scorpion Trail II for Pirelli… 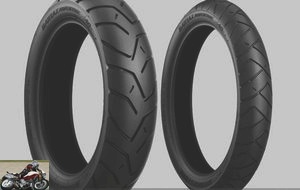 Road vocation obliges, the A40 is very close to the T30, both in its design and in the choice of rubber with as priorities in the specifications the improvement of the grip on dry and wet surfaces, a more stable front and a rear increased traction without forgetting increased longevity.

No dual compound here but an improved compound and the use of “in-house” HTSPC technology based on steel wires intended to stiffen the carcass. But, where the sporty tires in the range use 5 threads at the front and 3 threads at the rear, the architecture is here reversed to adapt to typical road constraints with the key to greater comfort at the wheel. front and rear able to withstand heavy loads (duo, luggage) without excessive deformation.

Another important point is the choice to saturate the tire with silica in order to optimize the grip available at low temperature and in the rain. Finally, our technician clarified during our presentation that the Battlax were not waxed and therefore no longer required breaking in.. 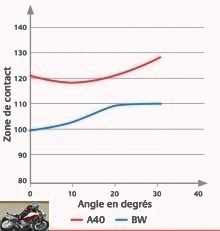 On the design side, the manufacturer has also revised its copy with elongated and widened grooves for better water evacuation, but also more spaced so as not to compromise the rigidity of the carcass..

At the front, the profile is retouched to offer a larger surface contact with the ground than the Trailwing. Supporting diagram, the most important benefits are made in a straight line and during strong angles.

According to tests carried out at the Bridgestone development center, all of these modifications translate into a grip which increases by 4% in wet conditions and a chrono decrease of 7% under the same conditions. As for endurance tests, the lifespan of the A40 would be 22% longer than that of the Trailwing, with average mileage of around 8 to 10,000 km. Here too, our doctor of tires from Bridgestone told us that the A40 could achieve significantly higher (or lower) mileage depending on the constraints of use: on-board weight, acceleration / braking, type of asphalt, exterior temperature, etc.). 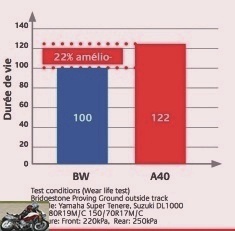 On the road (and the track)

To verify all the merits of their work, Bridgestone invited us to the south of Portugal, in the region of Faro and put at our disposal a wide selection of the best-selling machines in the segment: BMW R 1200 GS, Yamaha Super Tenere. , Suzuki V-Strom 650 and 1000, Triumph Tiger 800, Honda Crosstourer … And to measure the benefits (or at least part) of the new Battlax A40, the Bridgestone staff have concocted a 130-kilometer course combining expressways , viroleuse departmental and even a little off-road in super soft version.

Judging the quality of a tire on the road is a highly subjective exercise. But even without having direct competition on hand, jumping from one machine to another, all shared common traits, namely a great neutrality of behavior. Unlike the latest generations of Michelin Pilot Roads which tend to exacerbate handling and liveliness, the Bridgestone tire offers a smooth and progressive angle setting. And once set on the angle in turn – all mass distribution and caster angle combined – the stability provided by the A40 is particularly reassuring. Probably the result of a good agreement between the front and rear profiles. Rather good news when you know the anxieties that sometimes arouses the choice of a new tire assembly.

Here, none of our trails have badly digested the profile of the new Bridgestone. By following our supersonic opener Christophe Cogan on the most tortuous portions, this benevolent stability of the A40 does not impact the handling, never making the whole truck in the sometimes brutal changes of angles imposed by our course. And as our machines were in “full power” versions, there were many opportunities to test traction in the dry.. 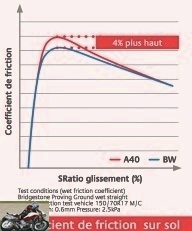 Apart from a few rare dusty portions swallowed drum beating, the grip at the rear has never been faulted. Same observation at the front with a downside to underline on a machine. While driving on the Suzuki V-Strom 1000, equipped with a particularly rigid front axle and an XXL braking system, you can feel the front tire working in the most aggressive phases of driving, in particular keeping a lot of brake on entry. turn. If we are still very far from “crossing the skis”, this slight feeling of floating could possibly disturb some. This feeling is probably due to the choice of the three HTSPC filaments (against 5 on sports tires) and the touring / comfort orientation of the A40. A few Psi more at the front should undoubtedly erase this phenomenon. For the rest, the A40 is in all respects in line with the portrait we portray Bridgestone. There remains the unknown of grip in the wet, our test having taken place entirely in the dry. Too bad, especially when Bridg ‘announces that the majority of the improvements are noticeable in these conditions. Without taking their word for it, Brisgestone’s know-how in this field is not to be doubted: the old T30 was crowned best brakeman on wet ground during a test carried out by the very serious magazine Motorrad in 2014…

Regarding the all-terrain portion, we will not comment either. The segments taken were very dusty and the front losses at low speed (but without falling) were numerous. It is all the more unfortunate that the previous week, the test of the Suzuki V-Strom 650 XT with Bridgestone Trailwing deflated to 1.5 bar had amazed us by its efficiency in similar conditions….

After having tested it on a large panel of machines, the A40 offers a “personality” that is both neutral and reassuring. Neither quick nor clumsy, during our test it showed excellent qualities in terms of traction and stability on the angle. And in the absence of rain during our test, it was impossible to verify the gains announced in the wet. Perfect for Touring use, its proven comfort orientation may well show its limits with very powerful machines for sport driving such as KTM or Ducati.