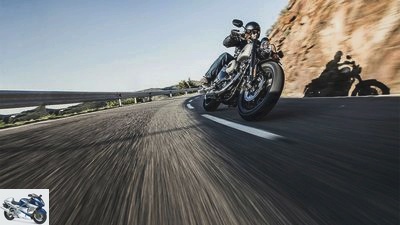 A new order. Two Harleys. South France. Plus a guy who wants to drive away from you. Not with me.

Marseille again. Dog shit on the sidewalks, pastis instead of beer, merguez instead of currywurst.

I leaned against the hotel bar and poured the marks from last night off my face. The hangman knows why they threw that Mexican party, but it was in my bones. Behind the bar was one of those girls you’d sell your mother for. Mine was dead. Bad luck. Smiling, the little one poured a counter-tequila into my coffee. I scribbled my cell phone number on the beer mat, gave her a wink, and marched out the door. Work before pleasure.

Harley-Davidson Low Rider S. The S probably stood for black, sexy and sporty. “We have given the baby the final stage of our air-cooled V2 hearts, a 1,800 cubic screaming eagle engine. The thing has almost 100 hp and 156 Newton meters, ”grumbled a technician. “Should be enough,” I muttered back. They had carted around 50 bikes to the Côte d ‘Azur. Half the Low Rider S, the other a new 1200 Sportster model called the Roadster. Today you could take the fat low rider for a walk. Three tour guides should make sure that nobody gets lost. well then.

Open face helmet, turn jacket, gloves on. I drove next to the tour guide and got a cigarette. “Put out the cigarette, otherwise it’ll burn up in the wind!” Growled the tour guide. Head wind? “Take it easy, man. Do you think i’m stupid? Harley! Group trip! You know. Crawl. If you also wear orange safety vests, you could be mistaken for a traveling construction site. So don’t tell me about the wind! ”The tour guide looked poisonous. As if he had just been accused of having the smallest tail. Or told him he couldn’t really ride a motorcycle…

We had come less than 500 meters, so I knew two things: The screaming eagle is worth the money, although they want almost 20 grand for it. And the poisonous tour guide is really serious. He always raced through the tin snakes to pole. And every time the traffic lights started, I would paint an autograph on the asphalt. I signed next to it. Then came the place name sign. And the winding road along the sea. But what about this guy? Hadn’t his wife let him down last night? Or did he need to pee urgently and wanted to get a head start? I decided on the variant that he wanted to show everyone who is the fastest. Okay boy, job accepted.

Of course, the Dyna Low Rider S is on. First you drag the index finger-length steel sensors on the pegs, then follow the pegs themselves. Barely twenty kilometers, I only had half of them. You had to give this guy one thing: Smoking was really not on this trip. We chased down the main road like synchronized jumpers. If the cops had been watching us from the air, they would have suspected an invisible tow bar between us. The colleague had 30 percent too much of everything. Weight. Inclined position. Speed. Have you ever raced through beetles in the south of France? There are teasing, electronic signs that tell you not only your speed, but also the penalty, in case they catch you: 40 km / h over it, three points, 500 euros. But maybe you got mitigating circumstances because the thing pushed so brutally?

Evil tongues claim that the thick air-cooled ones will soon be over. You would get water cooling. Because of this, they would have emptied the shelves in Milwaukee and planted the final expansion of their Big Twin engines in all kinds of bikes. Sale! It can be. The fact is: The Low Rider S is something like Vitali Klitschko in the current Harley portfolio between candidates in the “Biggest Loser” series. Although the 110 runs mechanically more jerky up to 2000 rpm than its smaller and 20 hp weaker brother with 103 cubic inches, what the screaming eagle does to you from 2500 revolutions is not normal. It rumbles as standard from the two silencers as from an expensive, questionably legal retrofit system. The specified 156 Nm feels like you forgot a zero at the end. The technicians had provided this energy with an easily metered and effective double pane. Do I have to be clearer? Screw in three or four centimeters longer struts in the back, and with the ground clearance, ergo lean angle, you shake 95 percent of all idiots out of the rear-view mirrors. We came to a stop in no man’s land with our engines ticking and swung our asses out of our saddles. The colleague stood in front of me in shoes that were sanded off at an angle, sent me a grin at the Ray Ban and said: “Now you can light one up. In the meantime I’m going to piss. ”One can be mistaken.

There was still tequila left. I’ve never heard of him sticking out or going bad, but anyway that happens … “How was your day, Buk?” The little girl at the bar gave me a question mark. “I need a pair of new shoes soon. But otherwise very informative. ”The clock read well after midnight. Once again I was last at the potion. “What are you doing tomorrow?” She cooed. “Unfortunately. Got to ride a Harley, Sportster Roadster. But it’s quick. ”That’s true, I thought. She smiled, wiped the counter with her left hand, scribbled a telephone number on the beer mat with her right hand, and blinked promisingly. There are moments when you know that riding a motorcycle is only the second most beautiful thing in life.

Next morning. In the pocket of the beer mat with your phone number, yesterday’s guy in front of me. Could the day be better? “Yeah, man! Do you have empty bladder today, or is it pushing again? ”He pushed the Ray-Ban closer to his eye and indicated a smile. Three minutes later we were on the road. You can’t fault the Harley boys very much. They have been building air-cooled 45-degree Vau engines for 107 years. But if I were in their place, I would have put everyone on the new roadster first. And then on the Low Rider S. Get out of a Porsche and into a Smart. And step on the gas. Then you know what I mean. Whatever. eyes shut and go for it.

Low Rider S: The S stands for black, sexy, sporty. And for some also for premature ejaculation. No problem.

A new model at Harley doesn’t necessarily mean that they’ll pull the big surprise out of their hat. The built-in upside-down fork was reminiscent of the one that was used in the XR 1200 at the time. The rear fender was shortened more and the seating position was more oriented towards the front than on other Sportster models. In addition, they had given the roadster a new cockpit. And you thought you would only move the box at night? In any case, you can only read the thing correctly during the day if you look up to ten centimeters with your eyes. But who does that anyway? Like almost all 1200 Sportster, the engine developed 67 hp, lifted almost 100 Nm and was supposedly less geared than its brothers in other models.

Amazingly, you didn’t notice much of it. But maybe that was also due to the switch from the Porsche. Whatever. The marmot greets every day. The guy in front of me again seemed to have a good reason to show the world the taillights. This time he turned from the coast towards the mountain range. You are already switching from lobster to mutton inside. And on even more curves. I wasn’t wrong. Up to almost half of the maximum speed, the drive seemed quite bloodless. After that, as if he’d sniffed cocaine. Anyone who exercises the cornering swing properly and wants to catapult from one bend to the other as quickly as possible must never let the crankshaft rotate below 3500 rpm. Apart from that, the performance was really impressive. The brakes are great, the lean angle is exorbitant for Harley standards. You also hit the targeted curve line with her. The box was also handy. Somehow. The seating position encouraged active cruising rather than passive strolling and was not as casual as on the Low Rider S. But what the heck? You should only improve the sound. This box wasn’t a screaming eagle. More like an angry magpie. Is pipe enlargement not trendy??

We chased up the passes. And down again. Boy, did this guy have a bladder! Or did he? On road? I mean, nobody notices. There was a final exchange of blows at the only traffic light in what felt like a 100-kilometer radius. We used to call it “jump-off”, do you remember? Full concentration. Two fingers on the clutch. Throttle grip equals rifle trigger. At the end of the straight, I was the first to turn. Maybe the guy should really lose weight. Again we stopped at a cafe in no man’s land. “Stationary speed camera, three passport photos per nose, have you seen‘? “He growled. Only three? “The main thing is that it was worth it,” I mumbled back, ordered a Fahrbier, pulled the lid out of my pocket and dialed the little ones’ number. At the end of the day’s driving, is there anything better than putting one away after a beer? A strange voice at the end of the line. Male to it. The little one had given me the number of the local hospital…

The writer Charles Bukowski was born to German-Polish parents in 1920 in Andernach am Rhein. When he was two years old, the family emigrated to America. He started writing at the age of 35. Bukowski is now considered one of America’s most important poets and masters of the history of dirt. He died on March 9, 1994 in Los Angeles. Under the heading BUKOWSKI FÄHRT, FUEL-Head Rolf Henniges writes driving reports in the style of the great master.