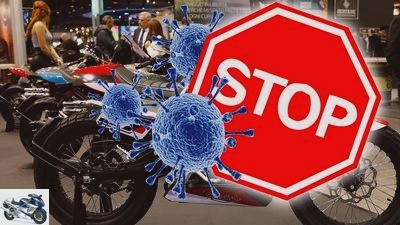 Cancellations due to Corona: meetings, trade fairs and events

The measures to contain the spread of the corona virus are forcing many organizers to cancel events or postpone them to a later date.

A few hours after we reported at this point that the Wheels and Waves Festival in Biarritz 2021 should actually take place from June 30th to July 4th, the organizers announced on social media that the event has now surprisingly been officially banned became. It would have been the 10th anniversary of the cult festival.

As the organizer has now announced, the event will also be canceled in 2021. The reason is the lack of planning security to organize a corresponding event. Originally the event was supposed to take place from September 3rd to 5th. This was the second time in a row that Glemseck 101 was canceled. The new edition is now expected to increase in September 2022.

After the publication of the new Covid-19 regulations by the Austrian federal government and a thorough evaluation of the effects on the event, the Red Bull Erzbergrodeo 2021 has to be canceled. With the announcement of the new event date in 2022, preparations for the next year’s event will begin: June 16-19, 2022 Eisenerz / Vordernberg.

As in the previous year, there will be no drag racing European championship run at the Hockenheimring in 2021. The Hockenheim-Ring GmbH, organizer of the NitrOlympX, has now announced the end of the quarter-mile race in Hockenheim, which will take place from August 27th to 29th this year. A date for the 2022 edition of NitrOlympX has already been fixed: According to the current status of planning, the event will take place from August 26th to 28th, 2022. Tickets that have already been purchased are automatically valid for next year’s event or can be refunded on request.

The prestige event on the traditional race track is also not feasible due to the ongoing corona pandemic. As part of the cult event from May 7th to 9th, training sessions and two races of the IDM Superbike 1000 were also planned as highlights. Despite the exclusion of spectators, there is still no reliable approval of the event by the authorities.

The house party Open House at the accessories provider SW-Motech could not take place in 2020. SW-Motech has now also canceled the date and the alternative date for 2021 due to a lack of planning security. The event is scheduled to take place from June 10th to 12th in 2022.

Due to the current high incidence, the organizer, the DiCoN-Group, has to cancel both trade fairs. The HMT should have taken place from May 28th to 30th, 2021 and the event in Berlin was planned for May 13th to 16th. For this, the organizer: “We tried everything to make the fair possible, but due to the current high incidence and regulations, we are not able to hold the Hamburg Motorcycle Days.” The same applies to the Berlin Motorcycle Days. The dates for 2022 are to be announced in the week after Easter.

The current pandemic situation at the Leipziger Messe led to the cancellation of the Leipzig motorcycle fair. It should have increased from February 6th to 7th, 2021. In 2022, the trade fair is to be held again on the planned date from February 4 to 6, at the start of the season for motorcycle enthusiasts.

The 50th winter motorcyclist meeting was scheduled for January 9, 2021 at the Augustusburg in Saxony. Now the event has been canceled due to the corona pandemic. The meeting of hardy bikers is expected to rise again in 2022. The date mentioned was January 8, 2022.

The organizers of the IMOT – International Motorcycle Exhibition in Munich have now announced that the exhibition for two-wheel fans will not take place in February 2021. In doing so, they are reacting to the renewed rise in the number of Covid 19 infections and the uncertainty in the industry regarding major motorcycle events in the next few months.

The organizers of Swiss-Moto, which should have risen from February 18 to 21, 2021, have canceled the motorcycle fair. After consulting with the association of Swiss motorcycle and scooter importers, motosuisse, the organization team decided not to hold Swiss Moto in its previous large format in 2021. A planned digital replacement event has meanwhile been discarded. The next regular Swiss-Moto 2022 will take place from February 17 to 20, 2022 at Messe Zurich.

The Bike Austria motorcycle fair planned for January 2021 in Tulln near Vienna has been canceled. A new edition is planned, but only in two years. The next trade fair date was announced as February 3rd to 5th, 2023.

The Tokyo Motorcycle Show should have risen in March 2021. The Japanese manufacturers traditionally show their innovations for the coming season at the fair. Now the fair has been canceled.

Although the elephant meeting traditionally takes place outdoors, due to the open, free and rustic character of this international event, there is no chance of approval under Corona conditions from the responsible authorities, the Federal Association of Motorcyclists announced. Therefore, the meeting planned for the end of January 2021 has been canceled. The next elephant meeting is planned from January 28th to January 30th, 2022.

Motorcycle Live is the largest motorcycle show in Great Britain. Due to the current events, the organizers have decided to cancel the fair, which was planned for the end of November. A date for 2021 has already been set. The 2021 edition will take place from November 20-28, 2021.

The 38th ADAC Supercross in Dortmund has to be canceled due to Corona. The event was originally planned for January 2021. The Supercross event in Stuttgart has also been canceled due to the pandemic. With the 5th-6th November 2021 and the weekend 14-16. January 2022, the dates for Stuttgart and Dortmund in the 2021/2022 season have already been set. There are positive signals from Chemnitz to return to the ADAC SX Cup in 2021.

The Isle of Man government announced the cancellation of the TT races 2021 on Monday, November 30th, 2020. The next TT races will now take place in 2022 from Saturday, May 28th to Saturday, June 11th.

Harley-Davidson and the Harley Owners Group have to cancel the 29th annual European H.O.G. Rally, which should take place in Portorož, Slovenia from June 10th to 13th, 2021. Tom Robinson, Harley-Davidson Consumer Experience Manager EMEA, explains: “We have explored all the possibilities that European H.O.G. Rally 2021 because we know it means so much to thousands of people. But we are also aware that the journey – especially across borders – would have been a challenge for our customers. Therefore, the cancellation was the most responsible thing we could do.”