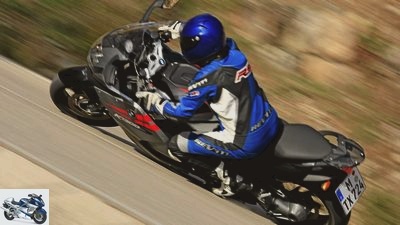 Chassis special: Part 6 – Troubleshooting the front of the vehicle

Suspension special: troubleshooting front of the vehicle
Tips for a stable motorcycle chassis

Your bike went through a thorough check based on the last PS output. Nevertheless, the athlete still behaves strangely when gasping.

What to do with which problem?

Unwilling to turn in, lousy handling, modest spring / damper work, banging the handlebars: the list of possible adverse reactions to driving behavior can be quite long. Sometimes an incorrect setup of the rear of the vehicle causes problems, sometimes it comes from an incorrect adjustment of the front end. Sometimes both are true. This part of the chassis special deals with the nasty peculiarities that mainly come from the front, explains the cause and offers solutions.

If the front of the vehicle jumps and tramples on rough bumps, instead of gliding smoothly over it, this is usually due to damping that is too tight – often due to a compression level that is too tight. Depending on the compression speed, it supports the work of the spring and, if properly coordinated, guarantees a smooth yet stable downward movement. If the front looks uncomfortable, open the damping so far that the fork works sensitively but with creamy, controlled damping. High-quality specimens have adjustment options for this.

If the front tramples in spite of correct damping, the cause may also be due to taut fork tubes. In this case, loosen the axle clamps, flex the fork several times and retighten the clamps. A lower triple clamp that is too tightly clamped can also impair the response behavior – therefore it is essential to ensure that the tightening torque is correct!

Increased mechanical friction inside the fork, too viscous fork oil or an air cushion that is too small also have a negative effect on driving behavior. The latter is particularly noticeable when braking, when the fork tightens significantly despite the high remaining spring travel. Fork springs with too high a spring rate also degrade performance. They are transferred when measuring the negative suspension travel. How this works is detailed in the first part of the chassis special (PS 12/2011).

Too tight rebound damping also leads to unrest in the front end. The rebound regulates the rebound movement. If it is too tight, the front of the vehicle no longer rebounds in the event of several successive bumps and really sucks into the hard area of ​​the spring and the air cushion. In this position, it can no longer absorb impacts from the road and directs fissures directly into the chassis. In addition, the front wheel tends to stamp when braking. In both cases, a more open cushioning can help. As with the compression stage, fork oil that is too viscous also affects the rebound stage.

With a little practice, you can already see an overdamped rebound stage while standing. To do this, you stand next to the bike, hold the handlebars with one hand and press firmly on the fork bridge with the other. If the fork rebounds too slowly (longer than a second until it comes to a standstill), this is a clear indication of too much damping. Tip: The video “fork damping” on our homepage illustrates this phenomenon, among other things. The second part of the chassis special (PS 1/2012) also deals with this topic in detail.

Too slack damping also causes unrest in the chassis. Take the pressure level, for example: If it is too low, the front dips quickly and far, especially when braking. In extreme cases, the fork hits its hydraulic or mechanical stop and no longer absorbs any shocks from the road. Then the front section begins to pump and the wheel tends to lock up early. In addition, the box turns in imprecise and gives little feeling for the front wheel. Countermeasures: Close the pressure level further and / or use thicker fork oil.

If the spring rate is too low or if the air cushion is too large, the front section of the bike will also sink very far. It is often difficult to pinpoint the cause of this in the damping, air cushion or suspension. Safety is only achieved by measuring the air cushion (see PS 4/2012) and the negative spring deflection. If the values ​​match, it is definitely due to the damping. 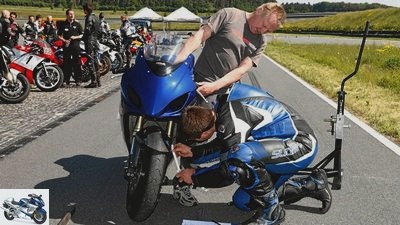 Measure, test, screw: Many a bike has a number of construction sites that have to be worked through one after the other.

Too little rebound damping also has a negative effect on driving behavior. In this case, the front rebounds too quickly after compression and swings several times when you press it while standing. This is particularly noticeable on bad roads with many long bumps and in jagged lean changes, because the front structure then moves hectically up and down. As with too slack compression damping, accuracy, precision and stability also suffer. You can remedy this by
the adjuster for the rebound damping is turned further and / or thicker fork oil is used.

If the bike is unwillingly angled, it can have various causes. Often it is due to a geometry that is not easy to handle. If the spring stiffness fits and the fork springs are correctly preloaded (keyword negative spring travel), it helps to push the fork tubes upwards through the fork bridges. As a result, the bike is lower at the front, which has a positive effect on handiness. But be careful: If you lower the machine too far, the front wheel can hit the radiator or other attachments if it is strongly anchored. When the fork is completely submerged, the distance to all frame-fixed components should be 10 to 15 millimeters, as the stanchions can bend up to these values ​​in the event of hard braking attacks.

However, lowering it by 5 to 10 millimeters should not be a problem. If the bike still seems too sluggish, you can raise the rear a little at the same time. We’ll take care of the rear end in the next issue.

The wrong tires also make the bike unwieldy. The best way to find the right skin is to study the PS tire tests. This year’s one is already running and will appear in the next issue. Of course, the correct air pressure is also important. If it is too low, the load turns slowly and leans into bends on bumps. In addition, the righting moment increases when braking in an inclined position. If the air pressure is too high, on the other hand, the tire has too little contact area – bad for grip. Furthermore, the self-damping of the skin suffers.

If the racer looks wobbly when it is bent, this is often due to the geometry being too extreme. Then it helps to push the fork further down through the bridges. As a result, the front gets higher, the steering head angle is flatter, the caster is longer and the bike is more stable overall. Attention: Push the bars through until they are flush with the upper fork bridge. When lifting the front section, make sure that the brake lines are still long enough even with the fork fully extended. Harder springs or greater pre-tensioning also increase the front of the vehicle. But that in turn can have a negative effect on the spring and damping work (see above). Alternative: lower the rear.

The handlebar slap – in new German: Kickback – often occurs in athletes with a lot of power, a stiff chassis and tight adjustment of the suspension elements. Especially when accelerating rapidly over several consecutive bumps, the handlebars sometimes wriggle so hard that the rider can lose control of the bike. In principle, this phenomenon is counteracted by a high static negative spring deflection of the fork – with mostly unpleasant side effects on the spring work. A high-quality, adjustable steering damper therefore helps against kickback.