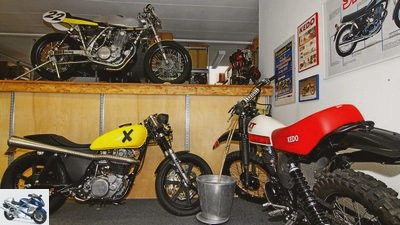 For 20 years everything at Kedo in Hamburg has revolved around large Yamaha four-stroke engines: SR, XT, TT, TDM and TRX.

This shop is alive. Traditional. It is Kedo’s third address in Hamburg in 20 years. And once again the constantly expanding mix of warehouse, workshop and apartment is bursting at the seams. Apartment? Yes, because until 2007 Daniel Doritz (43) lived with his wife here in the backyard in Barmbek. “But there wasn’t enough separate from work.”

He should have known: In April 1992, Daniel and Erik Kerger founded the accessories store for Yamaha SR and XT 500 just in your own living room. The company name “Kedo” combines the surnames of the company founders Kerger and Doritz. Fine for fat four-stroke engines, that was, is and will be their program. Meanwhile for all Yamahas of the series SR, TT, XT, TDM, TRX, WR and YZ, from 250 to 1200 cm³. The focus is on the 500 and 600 models, says Daniel.

“The Kedos” is how he calls his great team of twelve people. All employees are handpicked: “You have to know and love SR and XT, otherwise you won’t be happy here.” That is why Daniel has recruited good people several times, those with a real passion for single-cylinder.

The employees are full of enthusiasm. Knowledge and feeling are required for 6500 available parts, from gasoline filters to aluminum swingarms, from wheel bearings to stainless steel power manifolds, from sticker sets to replacement tanks.

The almost 500-page catalog lists 4,500 parts alone. Quasi the bible for Yamaha’s singles. Because the Kedo catalog also contains service data, dates and classy complete conversions. “Pure, down-to-earth, with no electrical amplifiers”, that’s how Lutz Semtner (46) describes what is special about XT, SR & Co. He already drove the Paris-Dakar. And “of course” has an XT 500 himself, of course. 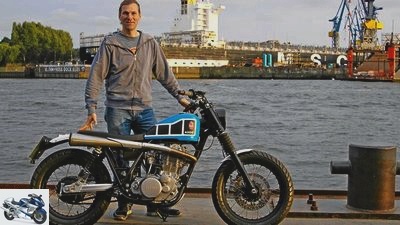 Cooperation: Daniel Doritz presents the D-Track, a 150 kg light SR, which he developed together with Jens vom Brauck at the Port of Hamburg.

Lutz is Kedo’s “Design Minister” with “an ear to the customer”, advice on the phone and on site. Mikael from Finland has just come into the store. He is passing through and only needs two mirrors for his single. Kedo is not only known in Germany. Even before the grounded single-cylinder scene, the web makes time-

age not stop. Early on, Kedo relied on a good website and computer-aided order processing and warehousing. “When we started in 1992, 95 percent of sales went directly over the counter.” So orders by fax, letter or telephone made up around five percent of sales 20 years ago.

Today, more than 90 percent of all orders come in by phone and especially via the online shop, Kedo has customers around the world. The website is in German and English and gives prices in euros plus dollars, pounds and yen: “The Japanese are completely crazy about SR,” reports Daniel.

Parcels are sent to the motherland of this cult motorcycle several times a week: “The Japanese appreciate German manufacturing work.” In particular demand in Nippon? Oil temperature direct meter from RR, conversion kits for hydraulic clutches from Hymec / Magura (289 euros including fittings, lever and slave cylinder) and double lubrication for the sensitive rocker arms for a manageable 39.90 euros.

Nice gesture and trademark: Every delivery from Hamburg comes with a Haribo liquorice snail. The medium-sized company can only produce a small part of the huge range itself. He therefore awards exclusive orders to renowned suppliers and specialists. “Our bench for them SR 500 is a real Hamburg product, ”explains Georg Kunzel (37), a business graduate. “Developed by Kedo, perfectly shaped by a saddler in the Hanseatic city – flatter, yet pleasantly upholstered.” Know how. 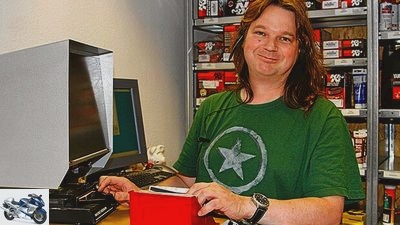 Lutz Semtner is the good soul for customers on site and on the phone. He was already driving Paris-Dakar.

Georg started in 1996 during his studies. Today he is the third partner alongside Kerger and Doritz. Once Kedo, always Kedo. Georg’s favorite product? Bellows for the TT 500. “We have them reproduced true to the original.” With small grilles so that air can escape during compression. Thanks to the modular system, they also fit the XT 500. “We have a lot of treats that Yamaha can no longer deliver itself,” says Georg.

Ralf Thumm, a trained toolmaker and mechanical engineer, is responsible for the technology. He proudly presents a very narrow toothed belt instead of the standard chain for the SR 500. “We succeeded in adapting the low-maintenance toothed belt drive inexpensively,” says Ralf happily. Until August 31, 2012, the pre-order price for the conversion kit is only 280 instead of 395 euros later.

Ralf is really enthusiastic about technical delicacies. These include better-mounted chainring carriers for the 500 series models, based on the 600 series. “Only then does it really run without wear and tear,” says the 47-year-old. “Apparently Yamaha didn’t expect such a single cylinder to run for 30 years,” he says mischievously. “For Kedo, it’s not just about replacing. It’s also about improving. The in-house workshop overhauls assemblies, overhauls engines and restores entire machines.

For the Hanseatic people, it is important to have customer loyalty, in 2011 they invited to the fourth Kedo OffroadDay. “There’s no glitter or glamor,” says Daniel, “just pure driving.” No wonder, he used to drive motocross himself.

The new edition of Kedos RaceDay based on the model from 2006, however, has so far failed due to the search for suitable racetracks. Kedo also started in the supermoto scene with an extensively converted YZ 450.

At the initiative of the Cologne designer Jens vom Brauck, the “D-Track”, a 150 kilogram SR, was created as a scrambler with flat track elements at the end of 2010. Other common ideas flowed into the later “B-Track”. Daniel Doritz: “Jens had been a Kedo customer with his SR 500 for a long time, but I didn’t know him personally. It was spontaneous sympathy. “ 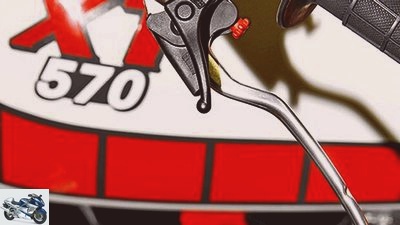 An XT with 570 cubic meters and a Magura hydraulic coupling.

Jens knows his way around and has unwound 250,000 kilometers on his SR. And he knew what was going on in the scene. His suggestion: “I’ll build you cool SRs, just like the ones popular in Australia or Japan.” 95 percent of the parts required for the D-Track were already on the shelf. The requirement for newly developed components was that Kedo could offer them in small series, such as fenders and lamp masks. “We want to show what’s possible, encourage the owner to customize himself.” If you don’t want to do it yourself, you can also buy complete conversions from Kedo, “from 12,000 euros and with a lot of waiting time,” says Daniel.

He knows three types of single-cylinder pilots: First, those who, after school, university, children and a career, consciously return to their single, who often waited for years in the shed or garage. Furthermore, drivers who still want to do something themselves, on an honest, robust motorcycle. “After all, an XT 500 once embodied the enduro dream – a real men’s motorcycle with a macho image.” Real enthusiasts for a pure four-stroke feeling. Like the Italian who came to Hamburg by plane to pick up a tuning camshaft.

After all, there are still the everyday drivers. You are betting on a motorcycle that does not constantly demand, “except perhaps starting up”. Simply reduce the number of cylinders. The recipe against boredom? Stew every day. When Kedo started in 1992, the XT and SR 500 had already passed their zenith. But the Kedo team’s passion for the single-cylinder can still be felt today.