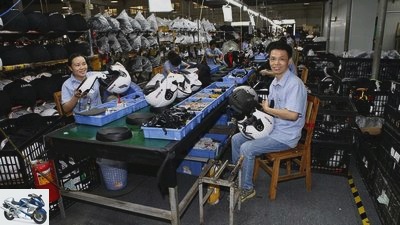 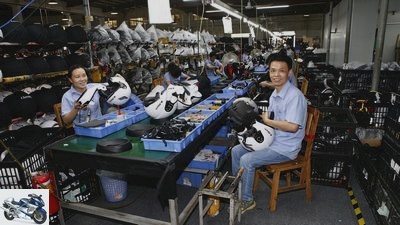 1/27
An on-site visit at the Chinese company LS2 reveals why Asians are so far ahead in the industry. 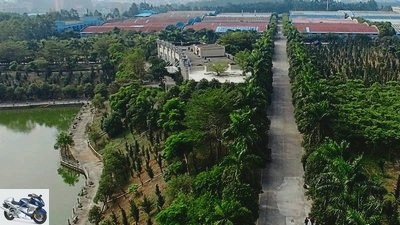 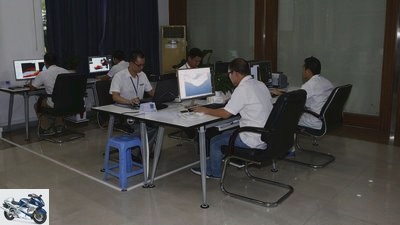 3/27
The design department works with software developed in-house. Around 20% of the 1,400 employees do development and organizational tasks. 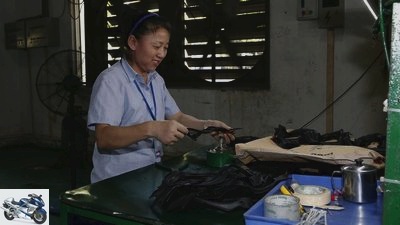 4/27
Manual work, if it works faster and cheaper than with a machine. Yang Li Fei (42) brings visor seals into shape. 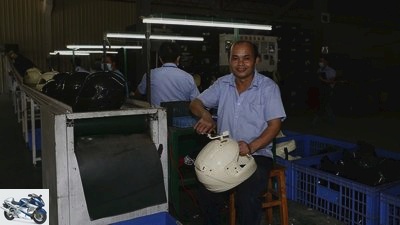 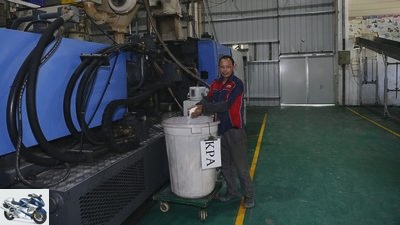 6/27
Pang Zhen (50), longest-serving LS2 employee, in front of one of 45 (!) Injection molding machines in which a helmet shell is made from granulate at 260 degrees. 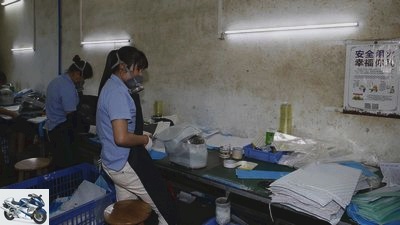 7/27
Ten employees take care of the prepack preparation for the thermoset trays. 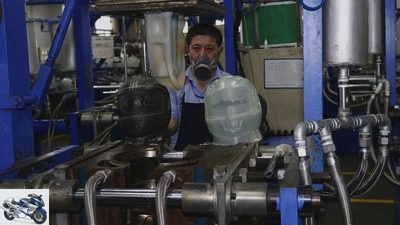 8/27
The prepacks come in a steel mold, a balloon presses them firmly, and after just under twelve minutes at 170 degrees, Ma Jun (42) removes the fiberglass shell (right). 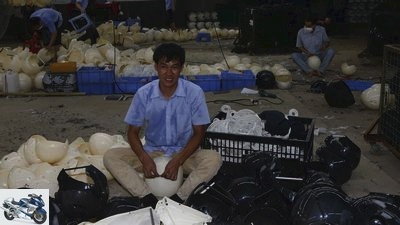 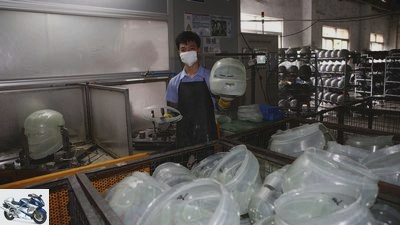 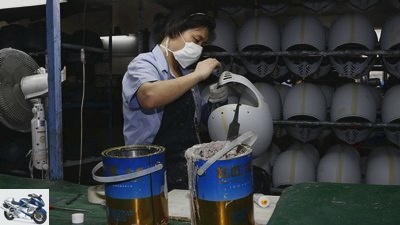 11/27
And this is what the elaborate handwork in finishing looks like. Li Yong (28) smooths out small bumps. 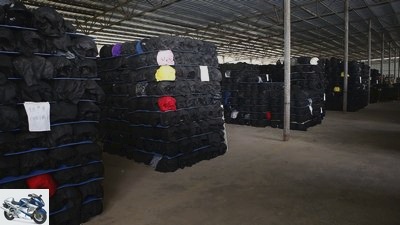 12/27
Every day 6,000 to 8,000 new helmet shells end up in the interim storage facility and wait there for painting and subsequent completion. 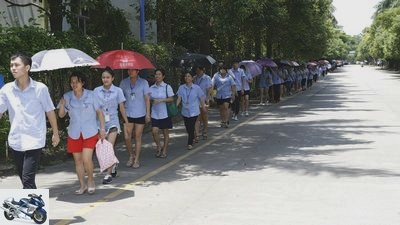 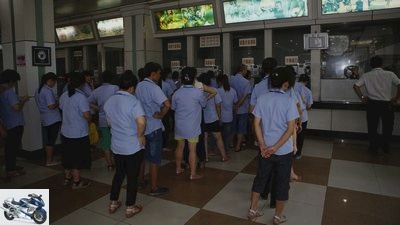 14/27
The output switches differ according to the degree of severity: normal, medium and heavy. 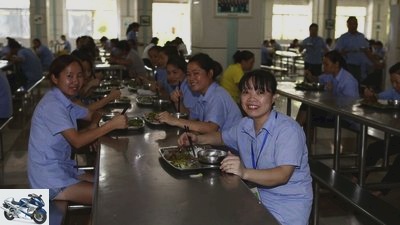 15/27
The canteen is air-conditioned because the average temperature in August is 30 degrees. 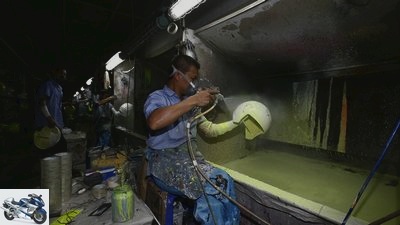 16/27
Around 30 employees work in the manual painting area; the professionals only need 20 to 30 seconds for a helmet. 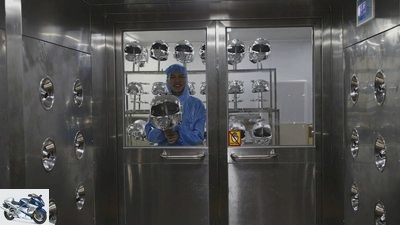 17/27
Just a few meters away, it looks like a spaceship. Here it goes through an air lock for chrome plating. 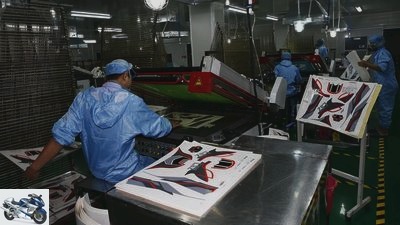 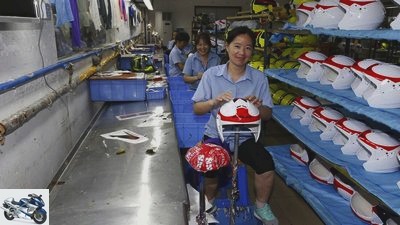 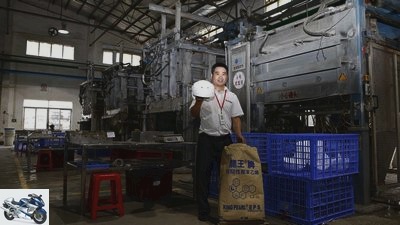 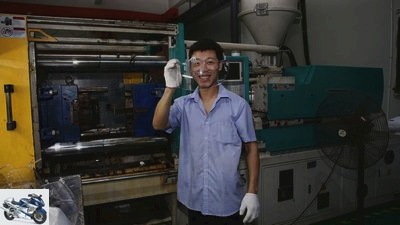 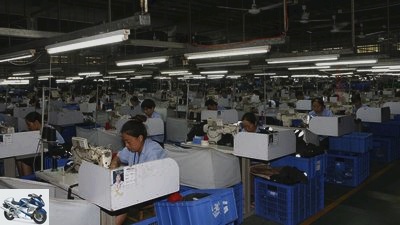 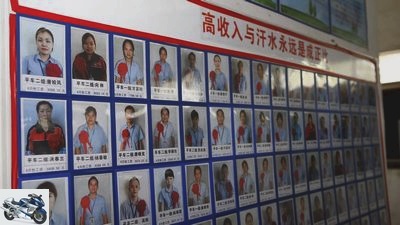 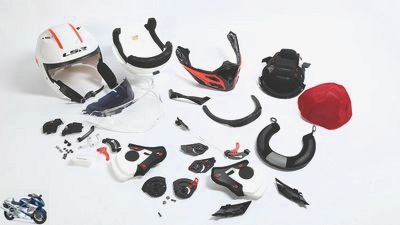 24/27
Counting every small part? Three digits! LS2 does almost everything itself. 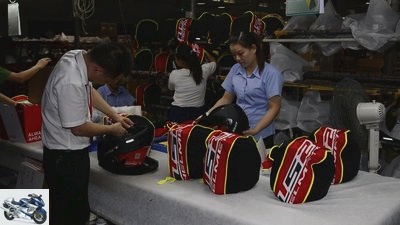 25/27
After final assembly and quality control, it goes, among other things, to the European warehouse in Barcelona. 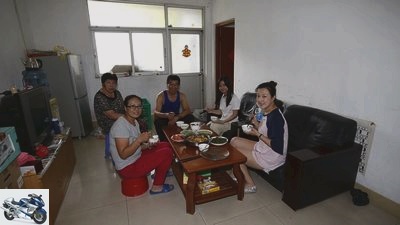 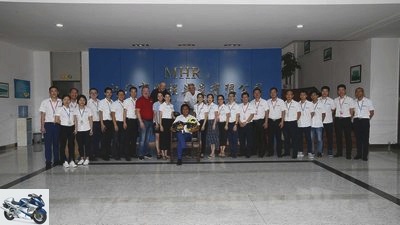 27/27
The charismatic Arthur Liao (seated in the center of the picture) is the founder and head of the family business.

High quality motorcycle helmets from China? Almost unthinkable for seasoned German bikers 15 years ago. But now the Asians are playing very well in the industry. An on-site visit at LS2, the Chinese number one, reveals why this is the case.

History repeats itself: at the end of the 19th century, the English parliament felt compelled to protect the domestic economy from cheap and supposedly inferior exports. The result was a law called “Merchandise Marks Act”. From now on the indication “Made in Germany” discourage customers from buying. The further course is known: The designation of origin, intended as a warning, has been transformed into a seal of quality.

What we do with the name “Made in china” would be. For some motorcyclists, this is still an exclusion criterion when it comes to purchasing clothing and accessories. For the same people, by the way, who use a smartphone and camera that were assembled in China. However, our attitude towards Chinese products is sometimes a bit irrational. And the old merchant adage still applies that if you order something cheap, you also get something cheap. But it works the other way around, also and especially in China. The MOTORRAD editorial team is always aware of this when you can follow product tests to see how a brand is developing. For example, the largest Chinese helmet manufacturer LS2, which even won the title “world’s largest motorcycle helmet manufacturer” plays along.

Just a few years ago, the common motorcyclist took note of the LS2 helmets at best as a cheap by-catch in the Hein Gericke shop. In the meantime, the family company’s products can even be found at well-known BMW dealers and have achieved impressive results in MOTORRAD helmet tests. Most recently in issue 21/2017, in which an LS2 flip-up helmet with the judgment “Good” landed on the fourth of twelve places and relaxed it with a little less weight and volume “very good” would have been enough. In order to understand the LS2 success story, MOTORRAD visited the company based in the southern Chinese town of Heshan (around 500,000 inhabitants!) And took a closer look at helmet production, an unconventional mixture of the most modern and quite archaic production methods. High-tech is used wherever the use of state-of-the-art machines and raw materials from the West makes sense. And wherever fairly solid manual work leads to the goal, this is precisely what is used. In short: everything is extremely pragmatic. In combination with a pronounced vertical range of manufacture, ultra-fast development times and a high degree of flexibility, the result is what is now also a major image change for helmets “Made in china” contributes.

LS2 stands for “Liao system 2”, was introduced as a helmet brand in 2006 and began sales in Europe in 2008 via the Barcelona-based European headquarters (Tech Design Team). Company founder Arthur Liao (50) started manufacturing helmets for the domestic market in 1990. The LS2 helmets are made by “Jiangmen Pengcheng Helmets Ltd.” in Heshan, around 70 kilometers southwest of Guangzhou (“Canton”) produced. Around 1400 employees manufacture up to 8000 helmets per day. Sales in Germany are overflowing LS2 Germany.
Tel. 0 44 51/9 60 29 80
www.ls2helmets.com