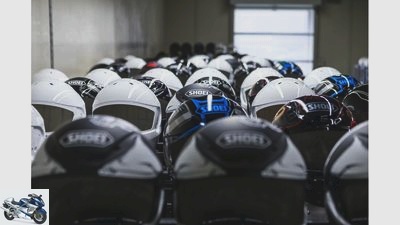 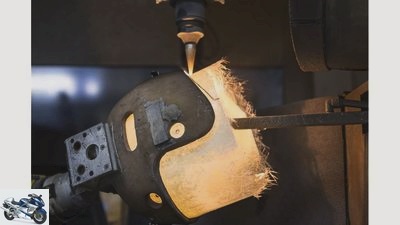 2/10
All overhangs that have arisen during production are removed by laser. 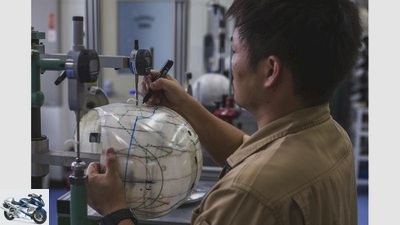 3/10
The shell is measured exactly, the holes are marked. 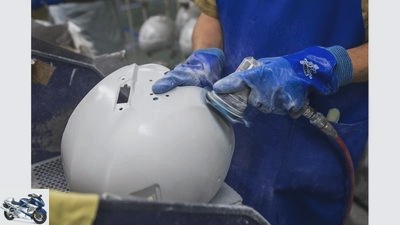 4/10
The bowl is primed and then sanded by hand. 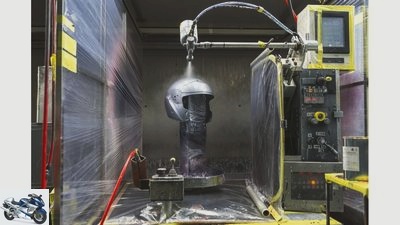 5/10
This is followed by the actual painting in the later basic helmet color. 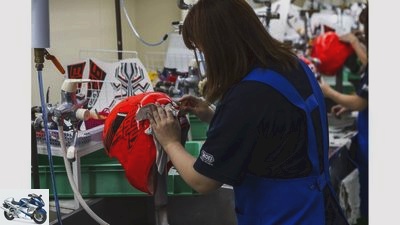 6/10
Then the foils with the elaborate decorations are applied. 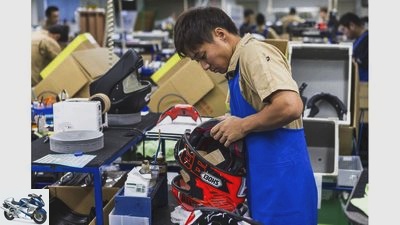 7/10
This is where the helmet pads and rubber lips are mounted. 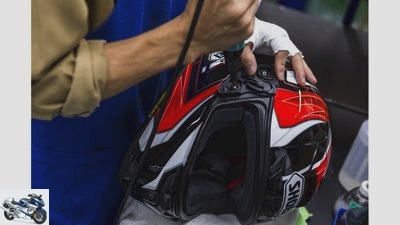 8/10
Then the complex visor mechanism is screwed on. 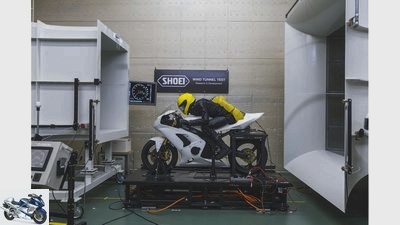 9/10
The wind tunnel is a very important development tool. 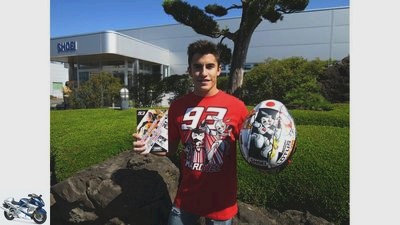 10/10
Racing as an image vehicle: Marc Márquez is Shoei’s most important advertising medium.

Company portrait Shoei
None among many

Shoei – this is not just any brand, but a fixed star in the helmet cosmos. A name with great radiance – and yet a dwarf among giants.

It is not difficult to feel extraterrestrial underground in Tokyo. Like ants, over eight million busy Japanese swarm around every day according to an inscrutable, divine plan between innumerable levels and tracks. Respiratory masks are exhibited skepticism towards everything infectious that may be in the air and at the same time a symbol of the individual’s strong need for safety. To be part of the crowd – that not only harbors protection, but also dangers. The Japanese and security: maybe that’s why it’s such a central, omnipresent topic. In any case, it is just as much a part of this busy bee population as a smooth organization. Seen in this way, a Shoei helmet is a typically Japanese product. Not only in terms of the protective function, but above all in terms of production.

Company portrait Shoei
None among many

Self-control as part of team performance

“Of course, a company only works thanks to the collective effort of everyone and not that of a single person.” This was emphasized by Eitaro Kamata, Shoei boss and founder in the foreword to the festschrift on the occasion of the 30th birthday. That was 20 years ago today. Kamata went on to say at the time that this anniversary could only be celebrated because everyone had contributed to it. It is by no means a reason to look back proudly or to celebrate the present. On the contrary, all of this is only the first step into an uncertain future, and one should not hesitate to take this step. Anyone visiting the two Shoei factories in Ibaraki (in the north of the country) and Iwate (south of Tokyo not far from the capital’s airport) for the 50th anniversary in 2019 will still feel the spirit evoked by Kamata everywhere today. This is surprising – and is only possible because by no means countless helmets tumbling off state-of-the-art, fully automated assembly lines in the Shoei factories, but because people here still make the joint effort to provide everything necessary for the quality of their products and the safety of others to do. You can see it in them, you can see it in what they do – and how they do it. 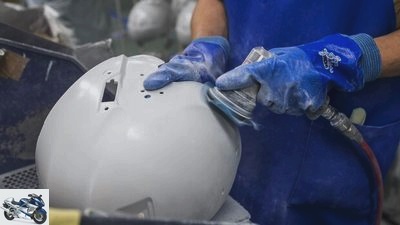 The bowl is primed and then sanded by hand.

The Shoei helmet production: That is more of a manufacture than an industrialized process. That’s around 530,000 helmets a year, each of which went through many Japanese hands before landing on the customer’s head. It was baked, measured, varnished and polished, assembled and foiled and varnished again. Above all, however, it was controlled, over and over again. But – and this is very important in the Shoei collective – not from surveying robots or quality controllers, but directly at the workplaces. Self-control as part of team performance, the name of the responsible employee on each helmet shell. Anyone who observes this process is not only surprised at the high level of manual work and the routine with which the mostly long-time “Shoeiians” create helmet for helmet, but also that in this traditional way over half a million helmets arise per year. And something else is absolutely amazing. This, in and of itself, considerable number is the result of the joint efforts of not much more than 500 employees, because the number of employees has remained largely constant for many years.

Others move on a completely different scale, even if there are hardly any reliable figures. At HJC, experts reckon with around double the output, newcomer LS2 is likely to be on the road again in completely different spheres. As far as the brand image is concerned, however Shoei nobody before anything. At most, Arai’s national competition still plays in the same image league, but that’s no wonder. After all, both fight with very similar weapons. Just the fact that Shoei still manufactures exclusively in Japan shows what it’s about. Just like the material of the helmet shell. A Shoei helmet has a shell made of high-strength GRP (glass fiber reinforced plastic), the cheaper and easier to process polycarbonate (in good German: plastic) was never an option. It doesn’t matter whether it’s a trendy retro design (EX-Zero), mid-range full-face helmet (NXR), flip-up helmet (Neotec II) or racing shell (X-Spirit III). With its aerodynamically extroverted appearance – one can confidently assume that – the keepers of tradition will have argued splendidly with the aerodynamicists in the company’s own wind tunnel. Or, better, discussed, because one thing must never happen with a Japanese company as traditional as Shoei, even in these hectic times. Namely, that someone loses face. 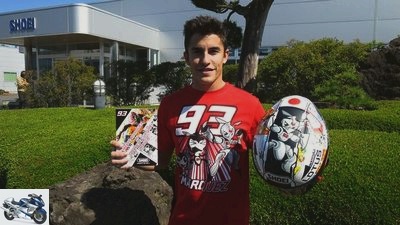 That may be a stumbling block in terms of zeitgeist and technology transfer, but in terms of product quality, preserving traditions is probably an advantage. It is hard to imagine that Shoei will launch a new development prematurely, but quite the opposite. The first head-up display in the company’s history was presented at the motorcycle fair in Tokyo this spring. But not with the conviction that it has exactly the right technology for the future, but rather questioningly. “Do you need something like that, don’t you need it?” When in doubt, the Japanese rely more on the experiences and needs of their customers than on the sermons of the future disciples. This, too, has a long tradition in the company and, by the way, applies to Shoei helmet development in general. The experience of the developers who have been working in the company for many years, combined with customer feedback – that is the guide for the products of the future. And which part of a helmet deserves special attention in this regard? The visor mechanism is a major challenge with every new helmet, we are told on site. A conversation with the responsible developers is not possible for reasons of confidentiality. The other challenge is aerodynamics. However, this does not primarily mean the smoothness with which such a helmet whizzes through the airstream, but the complex interaction of ventilation inlets and outlets and the invisible channels, which not only improve the interior climate of the helmet and thus increase wearing comfort, but also minimize the wind noise. Shoei’s top advertising medium, Marc Márquez, shouldn’t care about them. He wants to win, at any price. And not be one of many.

In the beginning nobody thought of the motorcycle, the first helmets from Shoei founder Eitarō Kamata were worn by miners and construction workers in 1954 – at that time still under the manufacturer name Kamata Polyester. The actual Shoei foundation followed on March 17, 1959, at first helmets were manufactured exclusively for racing. In 1968 the Shoei Safety Helmet Corp was founded. Despite its small size (461 employees), Shoei is now a publicly traded company with sales of 17,148.76 million yen (139.49 million euros) and earnings (after tax) of 2,578.26 million yen (20.97 million euros) . In the great Tōhoku earthquake in 2011, both locations were badly damaged and some of them had to be rebuilt.

Which manufacturer did your helmet come from??