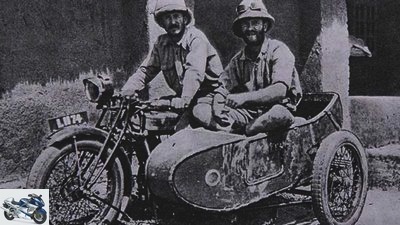 Desert pioneers
Opening up the Sahara

In 1901 the first motor pilots ventured into the Sahara. Werner Nother from Duisburg has meticulously reconstructed their hardships, but also their inventiveness.

The last kilometers before Duisburg ?? Shadowy industrial chimneys on the other side of the A 59, old workers’ housing estates behind painstakingly greened noise barriers.

As you approach, corner pubs, apartment blocks with small front gardens, in between a stylized winding tower wheel “To commemorate hard work”. Werner Nother lives here, behind »Sabrina’s Budchen«. The man they call the Sahara professor.

In 1972 he moved to Africa for the first time. With a Renault R4. 26 hp against
Dunes, scree and fields of soft sand. »Back then there were no travel guides or descriptions of the slopes. You had to ask yourself on site. «With a 1 to 4 million Michelin map, he set off, drove and asked ?? and didn’t stop asking.

The 63-year-old has been to the Sahara 34 times since then. And he almost never escaped it when he stranded his R4 in 50 degrees heat in the soft sand of Algeria. All hope is limited to two liters of water, a can of pineapple and chance. Who, after what felt like an eternity, swung past in a duck: two Dutchmen. They saved Werner Nother. From then on, the Sahara never let go of him ?? and the urge to explore how to begin developing those nine million square kilometers with motor vehicles.

In 1901 the first automobiles appeared in North Africa. The two Panhard & Levassor 12 CV by the brothers Pierre and Joseph de Crawhez. On February 14th, at 4:36 p.m., they reach the Algerian town of Ghardaia, as Nother noted in great detail. The first motorcycles came eight years later. The French Capitaine Pein with the mechanic Cochet on two water-cooled Rochet. You have your sights set on the route from Ouargla to El Golea. As the crow flies, around 300 kilometers of scorching Algerian desert. Boiling coolers and desperate pushing actions in the sand cost significantly more water than planned, and gasoline consumption is higher than expected. The fuel reserves are exhausted 100 kilometers from the destination. “The first motorcycles reached El Golea as early as 1909, but on the back of camels,” quotes Nother.

The problems of any motorized North Africa expedition are immense.
The cars are also struggling with overheating engines, the thin wheels sinking hopelessly in the sand and the difficult gasoline supply. Not only do slopes have to be created through sand and rubble, but also fuel barrels have to be loaded, the weight of which in turn causes the chassis to collapse. Why camel caravans create additional fuel depots.

In order to solve the traction problem in the sand, experiments were initially carried out with armored chains, treadmill systems and even aircraft propellers that promise lift. But this caused new mechanical problems, drove consumption to astronomical heights and the pace mostly slowed down. At average speeds of five to seven km / h, 40 liters for 100 kilometers were completely normal. A chain tractor from Holt had an incredible 700 liters and was even slower. The frugal camel proved to be clearly superior in the first 20 years. Most importantly, it didn’t need tires. Anyone who did not rely on chains, as Andre Citroën was in charge of when he started producing small cars, struggled with the handicap that the tires of the first hour tore through rows in the rubble.

Anyone who wanted to drive in Africa could get up to without tens of spare parts
Axles, connecting rods and loads of oil for the extremely loaded, weak engines not forward. On top of that, the decisive factor was the sweaty pushing force? mostly provided by the local population. Up until the 1920s, the motorization of the French desert regions, which was carried out at enormous expense, received more criticism than applause in the home country.

For motorcyclists, the hardships are almost immeasurable. Nevertheless, at the beginning of April 1927, two French and one Belgian ventured on three F.N. the first crossing of the Sahara. They lurch with their hopelessly overloaded motorcycles? 60 liters of fuel on board each? from Paris via Marseille to Algeria and from there to Mali. Only the Belgian Joseph Weerens has motorcycle experience. Nother describes the drama that lasted for weeks in a moving manner. “Although half of the luggage was left behind in Colomb-Bechar, there are big problems in the soft sand with the machines, which are still overloaded. Often it has to be pushed, and now all of them have countless bruises as a sign of many falls. «The Frenchman Bruneteau noted 53 departures in eight days. And the toughest stage is still ahead of you: the endless wasteland of the Tanezrouft. 1000 kilometers without a supply, »on which the three cannot count on any help. In the early morning of April 21st, the start into the unknown (…) Although the drinking water is strictly rationed, it is enough for a maximum of two days. In addition, the motorcycles used considerably more petrol and oil on the difficult terrain than calculated «. For days the trio pushes, falls and fights until they drop. “Around eleven o’clock on April 26th, Weerens is at the end of his strength and collapses.” A nomad finally saves the Europeans shortly before Tabankort in Mali.

Werner Nother does not seem to have missed anything that was moving in the Sahara from 1901 with motor power. With the help of advertisements, hundreds of interlibrary loans
Duisburg city library, incessant rummaging through French company and newspaper archives and phone calls with those affected or their descendants. And it is precisely the details that make his work so captivating. Such as the passage about the improvisational Americans who drove 6000 kilometers from Lagos through Chad to the Red Sea on two Triumph carriages. Nother happily describes that »unfortunately only a small metal pin for the ignition interrupter was missing from the spare parts they had taken with them by the tens of thousands (…) When the original is lost, they simply make a new one out of a melted-down denture«. The Duisburg resident even found undisturbed tire tracks from expeditions from the 1930s. However, his greatest coup came in France, where he bought photos of the first Sahara crossing in 1922/23 at an auction for the equivalent of 1,500 marks. In the colonial motherland, the activities received a great deal of attention from parliament and the population, and the newspapers reported accordingly often. Even back then, the endurance tests in the desert were a splendid PR effect for the up-and-coming auto industry. Andre Citroën invested millions of francs in elaborate expeditions with his new, caterpillar-driven Autochenilles. In Nother’s eyes, a gigantic media campaign for a misconstructed, unsuitable vehicle that could only survive thanks to insane logistics, tireless mechanics and countless Africans exploited to build slopes and push them. Now, almost 90 years later, he’s relentlessly settling accounts with Citroën.

All the more enthusiastically he tracks down all the scattered individual travelers. Like those brave adventurers who got stuck in 1924 because of a broken drive shaft with their completely standard Delage. While one walks to Tunis and back for the spare part for three weeks, the other waits fearlessly at the damaged automobile. Or the courageous Pierrette Bideau, who in 1935 in France together with her Bull-
Great Dane and only one spare tire in a used small Peugeot car to visit her fiance in Mali, bypassing all controls and prohibitions, in order to finally arrive back home just as unspectacular and breakdown-free.

A book that doesn’t want to end? and must not end. With which one after
654 pages still willingly devour 180 pages of index or a 17-page list of all slopes registered in 1931. A book that thrives on its humor, its love of detail, but especially on its moving participation for each of the remarkable actors. And for every nomad, every caravan, every pushing African who once helped pave the way through the Black Continent. An Africa book that is unique in its mix of science and entertainment. That
Life’s work of the professor ?? “In memory of hard work”.

Desert pioneers
Opening up the Sahara