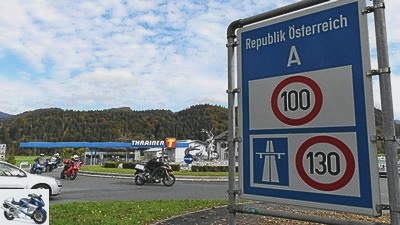 Driving ban on toll-free routes – these country roads are taboo

Driving bans for toll-free routes in Austria
The next step is the corridor toll from Munich to Verona?

Since June 20, 2019, certain toll-free road sections and some rural roads have been banned in Austria.

Only residents and tourists with a destination in the area are excluded. A list of the closed country roads can be found here. We’ll also keep you up to date on the corridor toll.

The driving bans apply to motorcyclists as well as to cars and trucks, on all weekends until September 14, from Saturday at 7 a.m. to Sunday at 7 p.m. The B182 Brennerbundesstrabe is not affected by the ban and is still freely accessible.

The list of roads blocked for transit can be helpful for motorcyclists’ tour planning:

Since July 6th, the Tyrolean state government has also extended the driving bans around Kufstein and Reutte:

Reutte: Driving bans apply to through traffic at the Reutte Nord and Vils departures.
Kufstein: A combination of driving ban and traffic metering applies here, i.e. only a certain number of vehicles are allowed to drive on certain roads per hour.
Driving bans: Coming from Innsbruck, the Kirchbichl exit is closed (roundabout MPreis L 211 Unterinntalstrabe, direction Kufstein) and the municipal road to the hospital at the Kufstein Sud roundabout.
Dosages:

It should be possible to completely block individual exits from the A10 (Tauern Autobahn) between July 13 and August 18. Salzburg also wants to ensure that tourists stay on the motorway and not burden the neighboring communities with additional traffic.

Disregard of the driving ban and the amount of the fine

According to the traffic department of the Tyrolean state government, the driving bans are monitored by the police. More than 100 drivers should therefore be on the weekend of 22./23. June 2019) have been sent back to the autobahn. Basically, drivers are sent back to the autobahn at the beginning of the driving bans; a fine is not yet due here. However, if a driver disregards the driving ban – “because at this point in time there is no police patrol on site and he is stopped by the police in the driving ban, a report can be made and a fine of up to 60 euros can be imposed by the authorities will be. “, so the information from the traffic department Tyrol.

For some, Austria is the holiday destination, but many are “only” passing through, which in recent years has meant an extremely high volume of traffic with all its nighttime and advantages for residents of popular transit routes. On the side of the advantages are sales at rest stops and petrol stations. However, the list of disadvantages is much longer and, in addition to the ecological and health impact, also includes the issues of noise, travel times and road safety.

Do you understand the residents??

No not at all.

Tyrolean governor Gunther Platter defends the driving ban against the Austrian news agency APA as covered by EU law: “We did not impose these measures out of joke, they are rather emergency measures to ensure traffic and supply security in our country.”

The Tyrolean state government also announced an expansion of the driving bans on country roads in the districts of Kufstein and Reutte.

In Bavaria, the state government immediately protested against the measure, as the behavior was contrary to European law, said Bavarian Prime Minister Soder to Munchner Merkur. The German Federal Ministry of Transport is preparing a lawsuit against Austria. Federal Transport Minister Andreas Scheuer describes the measure as “deeply discriminatory”, especially with regard to the Austrian lawsuit against the plans for tolls on German motorways. Background: The European Court of Justice (ECJ) judged the last toll draft favored by Scheuer as discriminatory against foreign road users.

Traffic jams have long been an issue between Bavaria and Tyrol: Germany controls at the border near Kiefersfelden and thus creates traffic jams on the Austrian side, Austria in turn holds back traffic on the Bavarian side with truck block handling.

Corridor toll from Munich to Verona

In order to make the Munich – Verona transit route less attractive for truck traffic and thus reduce transit traffic in Austria, Tyrol is demanding a higher truck toll from Germany and Italy. The toll is currently so cheap that it is worthwhile for the freight forwarders to make a detour of 100 kilometers via the Brenner Pass.

Federal Transport Minister Scheuer does not want to know anything about it, his ministry currently considers an increase in fuel prices in Austria to be more sensible than levying a corridor toll. In addition, thought must be given to electrifying the entire Brenner corridor.