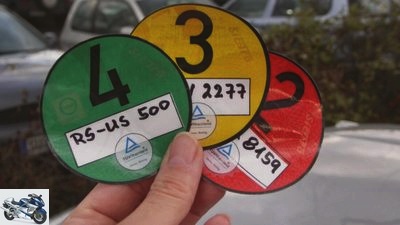 Driving bans for motorcycles: These cities lock out two-wheelers

Driving bans for cars for environmental reasons are already a reality in many cities.

But even motorcycles are only allowed to use some urban zones to a limited extent.

The latest push for driving bans in cities, which will also affect scooter and motorcyclists, comes from Spain. Since January, older vehicles with internal combustion engines have not been allowed to drive in Barcelona on working days between seven in the morning and eight in the evening. This also applies to mopeds and motorcycles built in 2002 or older and to cars (from 20 years of age, diesel from 14 years of age). The ban on buses and trucks should come in 2021. This is intended to improve the air quality in the inner city area. The no driving zone covers an area of ​​95 square kilometers within the ring roads of Barcelona. In order to be able to control compliance, the local authorities issue badges for vehicles that are allowed to continue driving. Similar bans have been in place in major French cities since 2016.

According to the “Clean Air Action Plan” the city of Amsterdam wants the Dutch capital to block all petrol and diesel vehicles from 2030 if possible, this also applies to motorcycles and scooters, mind you. As early as 2025, the A10 ring road is expected to be banned from driving taxis, buses, vans and scooters with combustion engines, and five years later also for private cars and motorcycles.

London, Paris and Rome with restrictions

The British capital London only significantly expanded its Ultra Low Emission Zone (ULEZ) on April 8, 2019, into which only motorcycles that meet at least Euro 3 are allowed to enter. The British have already announced a further significant expansion of the ULEZ for October 25, 2021 and are specifically planning to expand the ULEZ by a factor of 18: If the City of London and the general City Center were previously affected by the driving restrictions, the incumbent mayor wants the zone will now be extended to most of the suburbs and almost all of the access roads into the city, including some motorways. If you still want to enter the zone with your vehicle, you can buy a day ticket for £ 12.50 sterlin. If you get caught without it, you have to pay a fine of £ 1,000.

From July 4, 2019, from Monday to Friday (8:00 a.m. to 8:00 p.m.) in the French metropolis of Paris, only motorcycles that were registered after June 31, 2004 and should therefore comply with Euro 2 will be allowed to enter the French metropolis of Paris. A further tightening is planned for 2022. Then only newly registered bikes (Euro 3) will be allowed to enter the city during the week after May 31, 2007. From 2024 onwards, only motorcycles with Euro 4 that were registered after December 31, 2016 will be tolerated. And from 2030, only vehicles with electric or fuel cell drives will be allowed in Paris anyway. In Strasbourg there is a situational driving ban for all combustion engines. In France, a Crit’Air badge is generally required to enter the environmental zones.

In Italy, two-stroke vehicles are now completely denied entry in around 200 cities. The capital Rome has a tiered model that only allows Euro 2 or Euro 3 two-wheelers to enter, depending on the area and environmental pollution.