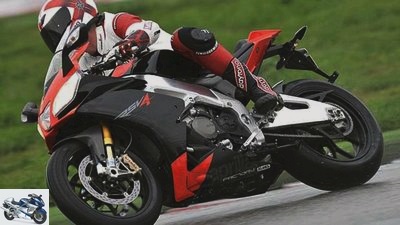 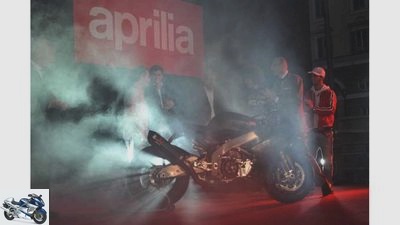 1/24
in the superbike variant 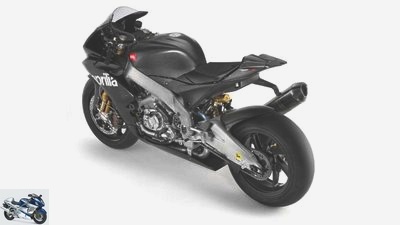 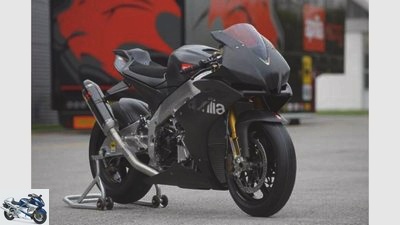 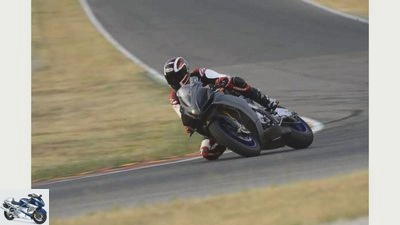 4/24
Aprilia RSV4 Superbike – appropriate use on the racetrack. 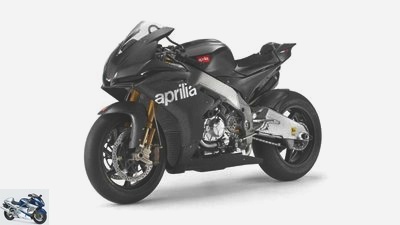 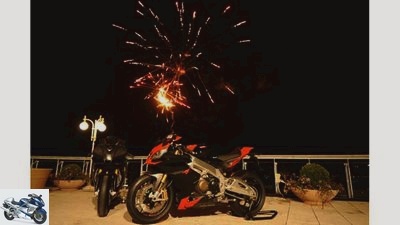 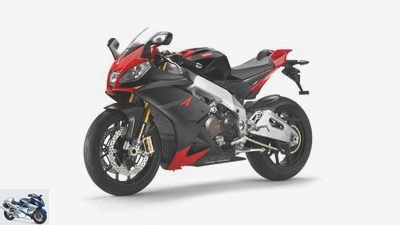 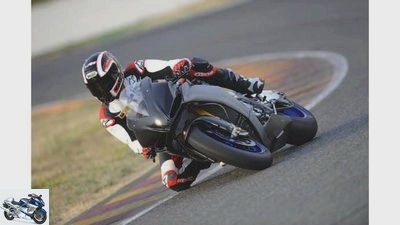 8/24
Aprilia RSV4 Superbike – appropriate use on the racetrack. 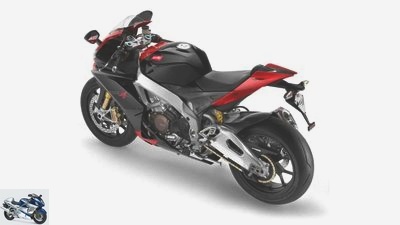 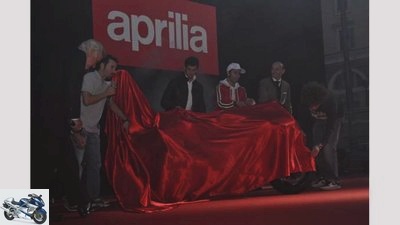 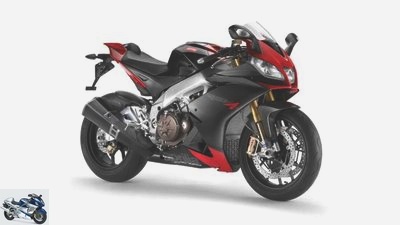 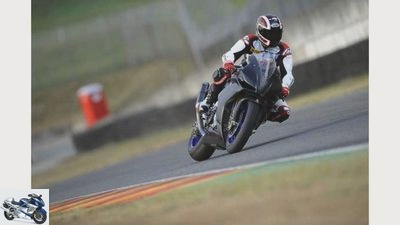 12/24
Aprilia RSV4 Superbike – appropriate use on the racetrack. 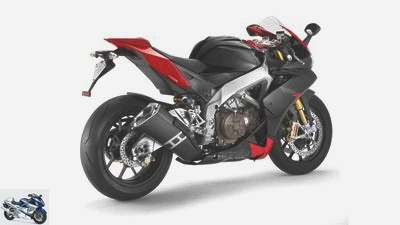 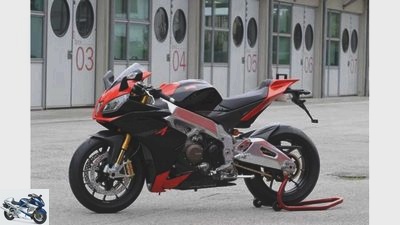 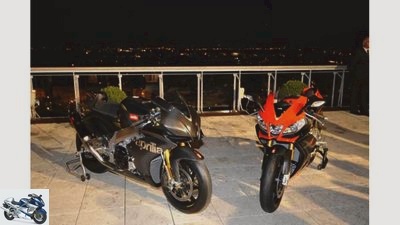 15/24
The two racers will be on the roof terrace 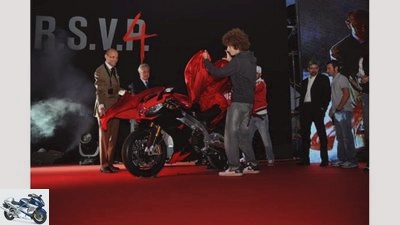 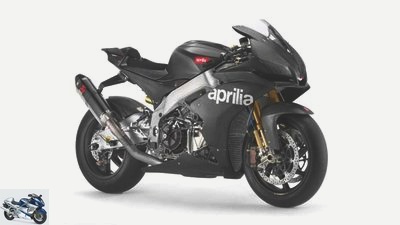 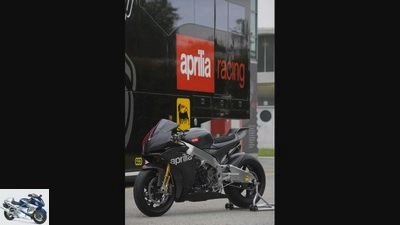 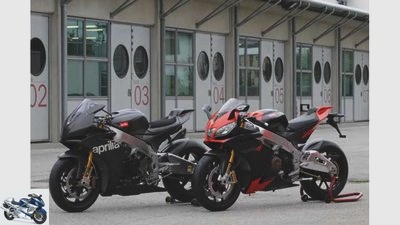 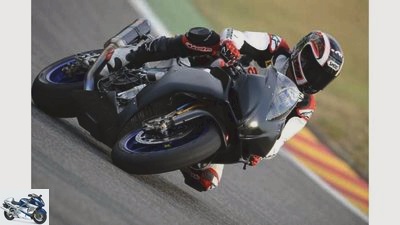 20/24
Aprilia RSV4 Superbike – appropriate use on the racetrack. 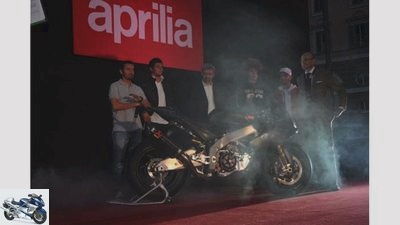 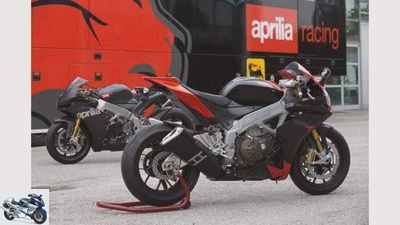 22/24
Aprilia RSV4 Factory, in the background the superbike racer. 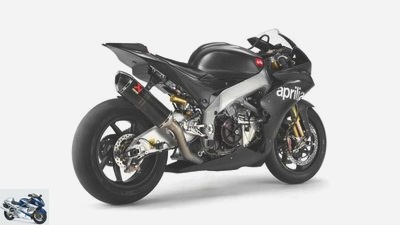 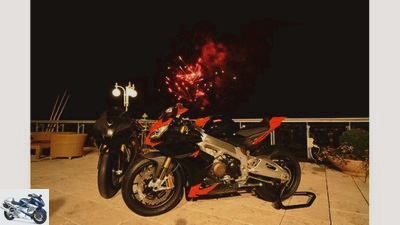 According to Aprilia, the focus was only on racing when designing the RSV4. Without compromise. The V4 machine has already made an impact in the Superbike World Championship. Now the civil RSV4 Factory gave their business card.

The Aprilia team is literally proud of its youngest offspring. “A new page in the history of superbikes” rejoices press spokesman Daniele Torresan. “Performance becomes design”, Designer Miguel Galluzzi beams. Unfortunately, the abrasion from car slicks has rubberized the braking zones and curves of the Misano piste. And the constant drizzle turns it into treacherous soft soap.

But complaining doesn’t help. Because it is the first chance to get to the bottom of the Italian. This extremely delicate stature, the crisp appearance, that turns on, the technical finesse with which the superbike is garnished, the mouths of sports freaks watery. The steering angle, pivot point of the swing arm and even the motor position can be adjusted for racing. This has never been seen on a production motorcycle. The development process took around four years and resulted in a very compact V4. First and foremost, it enables the petite stature, is only slightly more expansive than the V2 of the RSV mille. The aim was an independent engine concept that combines the powerful torque of a V2 with the high output of an in-line four-cylinder. The result is the V4 that spreads its cylinder banks at an unusual angle of 65 degrees. Five degrees more than the Mille-V2. This should be loud Aprilia allow a very effective design of the inlet channels. In addition, the cylinder heads are very narrow on the exhaust side, because only the inlet camshafts are driven laterally via a chain. They transmit their rotation to the exhaust camshafts via a central gear. The corset of the frame profiles could be placed very tightly around the side of the engine.

The V4 is not the cheapest solution, but it was not looked for either. It was about performance, and the engineers were allowed to start with a blank sheet of paper. The V4 allows a much narrower and more compact structure than a row of four, even if the bore is over the current 78 millimeters ?? as much as Yamaha’s YZF-R1 ?? should grow out. In terms of displacement, there is still room for improvement. The control of the valves ?? on the inlet side made of titanium ?? is not carried out using rocker arms, but rather using a bucket tappet to save space. And unlike the Mille-V2, the V4 does not have dry, but wet sump lubrication with two oil pumps, one of which operates the oil circuit, the second presses the oil through the cooler. Nevertheless, the RSV4 pays tribute to the Mille: in the design of the fairing. With its three headlights, it is a bow to the venerable Mille, according to Galluzzi. The fine rain never even thinks of stopping, the mechanics pull the heated blankets from the rain tires that are tightened around the forged alu wheels instead of the standard Pirelli Supercorsa SP. It begins. And with a surprise when you press the starter. A peculiar, grumpy and cautiously rude sound rumbles from the massive silencer. The 65-degree V4 equipped with a balancer shaft carries its crank pins with an offset of 180 degrees, which means that the cylinders fire at an unusual distance of 0, 180, 425 and 605 degrees. Sounds more like a mutated V2 than a biting four-cylinder.

Surprise two follows when latching onto the command center. Great knee grip, perfect distance from the handlebars, the feet find their place, and the hands instinctively fall on the deeply mounted stubs. Above all, you don’t think you’re sitting on a 1000, rather on a 600, which is a bit too big. The thing is really as compact as it looks. So get out into the wet fun. The RSV4 offers a choice of three mappings. One with full power and direct response, a tame one with power reduced to around 140 hp and a third, intended for days like this and therefore activated, for a smoother response and with reduced torque in the first three gears. However, not all RSV4s will survive the day unharmed. Approaching the limit is not a ticklish affair with the RSV4, despite the modest conditions. From 2500 rpm the V4 takes on the gas cleanly. From the tight bends it pleases with a powerful middle. High speeds are not necessary at the apex of the curve, 4000 to 5000 revolutions are sufficient, and the V4 pulls man and machine permanently on the straight. That saves a lot of nerves, as well as the ?? with all the emphasis with which the Aprilia marches through the speed range ?? extremely even power delivery that seems almost unspectacular. 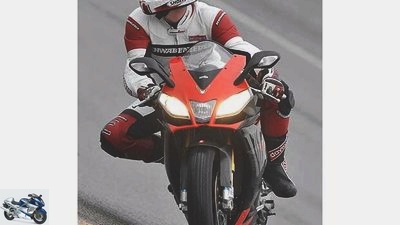 Noble and good, but not cheap either: Factory.

At higher speeds, the energetic tone becomes significantly more sharp, but the low pitch suggests that you are still in lower speed regions, so that you fidget in the limiter faster than expected. The driver does not notice the fact that at 10,000 rpm a servomotor, like the one on the Yamaha YZF-R1, lifts the upper ends of the intake funnel and the motor now draws in its mixture through short funnels to increase performance. The power output looks perfectly smooth. Especially since there are no undue vibrations to warn of the approaching speed limit. The power cube is fed by injection nozzles placed behind the throttle valves, which are supported by shower nozzles hanging in the middle above the funnels at full load. But with so much light there is also a little shade. The clutch, which is operated by a cable and a non-adjustable hand lever, requires a little force. On the other hand, the transmission and load change reactions could use a dash of suppleness.

The Aprilia also owes its chassis to the fact that dancing on the slippery parquet does not become a tightrope act. You can find the right line intuitively, feel your way down to ever deeper slopes with a lot of confidence. Turning in is so easy by hand, changing lean angles are playful and with light pressure on the thighs, which is why the head remains completely free to see the route. Driveability was not only the top priority when it came to the engine, but also the chassis settings. In order to gather the masses as close as possible to the center of gravity, the fuel barrel extends far below the bench, while the front part of the tank hood houses the 8.2 liter airbox. And because they did not want to compromise, the designers of the RSV4 Factory donated noble suspension components from Ohlins. With spring rates of 10.5 N / mm at the front and 9.5 N / mm at the back, they are coordinated on the pleasantly firm side. Unlike Ducati with the 1198 with the soft fork and the tough shock absorber, the coordination is much more harmonious.

Not only does the chassis look perfectly balanced, it also provides a lot of feedback, especially from the rear wheel, which is why it is easy to cock the tap early when exiting a curve. The RSV4 shows with gentle stirring in the handlebars that the steering damper is safely and rightly on board. At the other end of the straight, the monobloc brake calipers deliver a perfect performance ?? even under these tricky conditions. In spite of the wetness, it can be finely dosed, with a robust, but not malicious bite. And the fact that the rear wheel wags unsteadily over the slippery asphalt when braking at the end of the back straight is certainly not due to the effective anti-hopping clutch. Incidentally, this is supported by the ride-by-wire system, in which one servomotor per cylinder bank slightly raises the throttle valve to reduce the engine braking torque. Whether handling, engine, brakes, handling the Aprilia is playful. The first contact with the RSV4 leaves a strong impression. She is armed to face the four-cylinder phalanx from Japan. 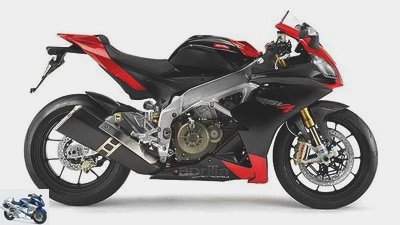 plus
+ A lot of power, even, easy to use
+ Chassis with playful handling and great balance
+ Compact dimensions
+ Detailed solutions well thought out and beautifully made