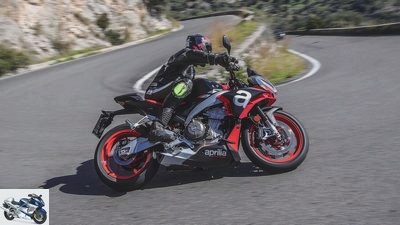 1/10
With the Tuono 660 Aprilia wants to mix the naked bike middle class properly. 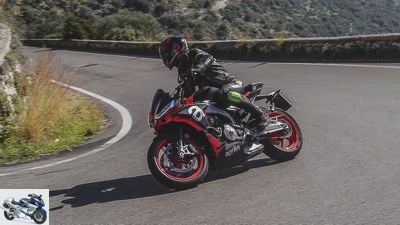 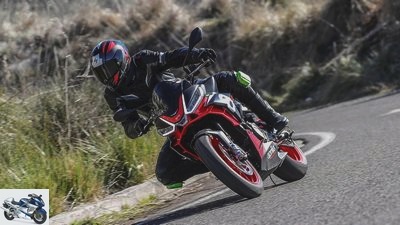 3/10
… that you are looking forward to the next corner exit when your right hand is allowed to fold down completely. A pure celebration. 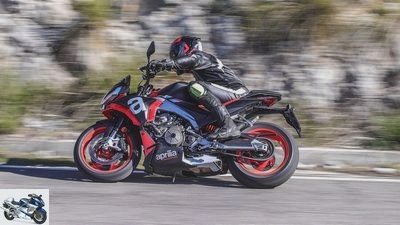 4/10
The Aprilia scurries handily, but not nervously through all kinds of radii. 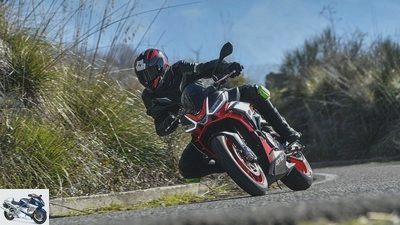 5/10
What they did almost as well in Noale is the seating position – even for tall people. 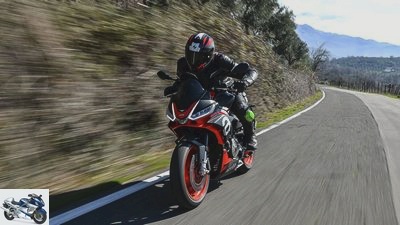 6/10
Because the roads were in this desperate condition, the braking performance cannot be conclusively assessed either. 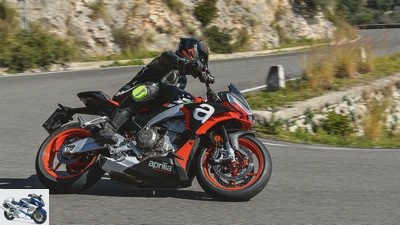 7/10
The radial brembos pinch well into the 320 discs, but should like to tackle even more radically. 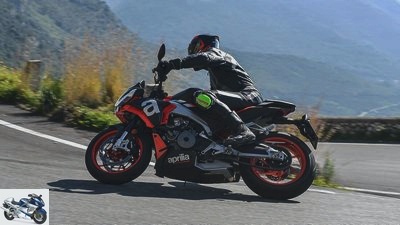 8/10
The two-cylinder hangs on the accelerator at low speeds of 2,000 rpm and over, finely and easily dosed. 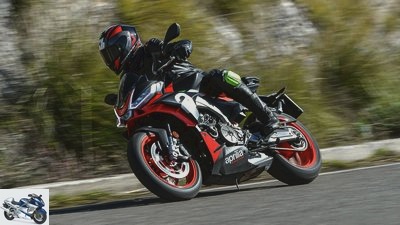 9/10
So what’s left? The realization that this plane has what it takes to establish itself as a really fiery sharpening iron among the mid-size nakeds. The 95 hp are always sufficient, because they are served refreshingly dynamic. 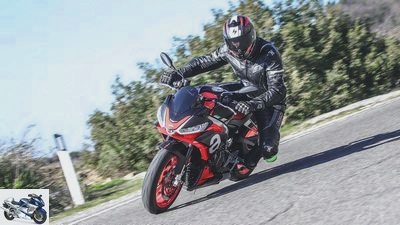 10/10
When it comes to tuning the spring elements, there are still slight question marks for the time being, just like Aprilia’s equipment policy.

Delicate 183 kg light, 95 hp and not too expensive at 10,550 euros – Aprilia’s new Tuono 660 wants to thoroughly mix the naked bike middle class with these ingredients. Does she really have what it takes? Impressions from the first rumble of thunder in Italy.lia Tuono 660

The year is 2021. Aprilia presented with the new 660 Tuono (Ital. Donner) the latest naked offshoot, which is closely based on an athlete. In this case, the one that has just been launched Aprilia RS 660. They have mastered this recipe for crisp, fascinating and undisguised bikes that come straight from their sporty sisters with perfection at the headquarters of Aprilia in Noale. Learned is learned, after all, the Italians have been using this principle almost since the first Mille with a V2 engine, which appeared shortly before the turn of the millennium. From the second generation – internally with the abbreviation RP – there was a naked bike based on it for every race cracker. Whereby Aprilia went to the full every time, the high-handlebar variants in terms of equipment and chassis always on a similar level as the athletes in the race for buyers’ favor.

To this day, nothing has changed in this procedure. The V2 supplied by Rotax became a V4 over the years, otherwise little has changed. And it is precisely this maxim that Aprilia is now implementing without further ado with the newest member of its own naked bike lineup, the Tuono 660. It is largely based on the RS 660. Of course, the tubular handlebar is nine centimeters higher than the stub on the athlete, the Footrests really only very gently further forward and down, and they are also equipped with cushioning rubber pads. From an ergonomic point of view, those are the biggest changes.

With the engine, however, the Tuono 660 has to accept a small cut. Your twin only mobilizes 95 hp when the 81 pistons cover 63.9 millimeters between the dead centers at 10,500 rpm. The 660 athlete pushes five more horsepower. It remains to be seen whether it is absolutely necessary, with this configuration the new Tuono 660 is definitely fully A2-compatible, which can also be an advantage. And if you think that this power does not lure you out from behind the stove, take a quick look at the liter output: The Tuono 660’s 144 hp. The big 1,100 sister with its high-revving V4 is not too far away with 162 hp. Conversely, this means that the new Tuono 660 could really do something. So now enough theory, get on and off.

With its crank pin offset of 270 degrees, which imitates a V2 engine in terms of noise, the motor starts with a powerful pitch right from the start. At low speeds from 2,000 rpm, it hangs on the gas in a fine and easy-to-dose manner. At least when the most defensive of the three road driving modes is engaged. These are split into Commute, Dynamic and an individually adjustable mode. In commute mode, Aprilia has stored rather cautious values ​​for the engine response and the entire armada of assistance systems. These include an adjustable ABS, an adjustable TC and an equally adjustable wheelie control as well as an adjustable engine braking torque. In dynamic mode, the Tuono 660 jerks forward by leaps and bounds when the throttle is ragged at low speeds. Therefore, in the city feeling in the environs of Rome in Italy, the commute mode remains in it for now. In addition to the road modes, two race driving modes are available. These are also divided into a preprogrammed and an individually adjustable mode. 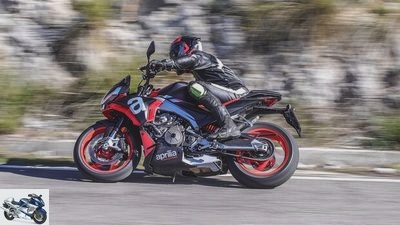 Slowly the streets widen, the pace increases noticeably. So quickly switch to the Dynamic level with the right handlebar switch and let the engine cheer. Sure, the two-cylinder with its different long, 48 mm intake ducts does its job well at the bottom, but at the top it is turning into a real giver of joy. Always held between 5,000 and 10,000 rpm, the 660 revs up so loosely and flaky, increases in power so emphatically, but manageably, that one is looking forward to the next corner exit when the right hand is allowed to fold down completely again . A pure celebration.

That is only tarnished by the streets here in Italy. Either they have so many patches and cracks that even the term bumpy road would be an understatement, or the Italians have completely covered them up with salt. Probably because of these requirements, Aprilia tuned the Tuono 660 relatively softly for the first test drives. That takes the horror out of the streets, and above all the fork glides pretty well over these slopes, while the directly hinged damper should definitely use a dash of sensitivity. But if the pace continues to increase, the dresser set-up, especially that of the fork, is not really good. When braking into bends and loosening the anchor in the lean angle, the fork then rebounds too quickly, causing unrest in the vehicle. More rebound damping, fork and damper are adjustable in rebound and preload, that improved.

Because the roads were in this desperate condition, the braking performance cannot be conclusively assessed either. The radial brembos pinch well into the 320 discs, but should like to tackle even more radically. It feels like more is possible. A test in better road conditions must then show whether it’s true. This is also important because Aprilia has equipped the Tuono 660 with a full electronics package for the presentation. This includes the aids already mentioned above, but also an IMU with a gyro sensor. That means: the electronic helpers work depending on the lean angle. The Tuono 660 does not come with this feature as standard, but it can be retrofitted. The automatic switch and blipper are also not standard. It allows you to change gears simply by pressing your foot, regardless of the direction. And that works at almost any speed and always without errors. These goodies raise the price of the Tuono 660 by a good 500 to 600 euros, depending on what your own dealer wants to see for the retrofit. With the RS 660, these parts are already included in the basic price of 11,050 euros.

Handy but not nervous 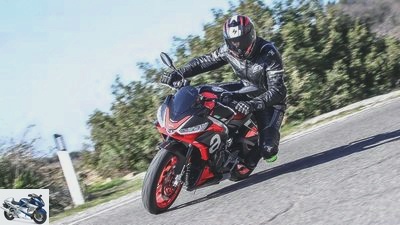 The chassis layout of the Tuono 660 with the swing arm mounted directly in the engine leaves fewer questions than the Italian pricing. Despite the ultra-short 1,378 millimeter wheelbase and a steering head angle of 66.1 degrees, the Aprilia scurries handily, but not nervously through all kinds of radii. To ensure that this is the case, the triple clamps in Noale have an offset of 28 in contrast to the RS 660 Shortened by 26 millimeters. Although this reduces the wheelbase, the caster – which is good for driving stability – is increased as a result of this measure. In the case of the Tuono, it is 104.7 millimeters. With this set-up, the new nude from Italy lies really well on the road and does not tend to be uneasy even with suggestions on the wide tubular handlebar. What they did almost as well in Noale is the seating position. Sure, the Tuono 660 is a fairly compact, light motorcycle, but even tall people will find a decent place on it. At most, the edges in the tank could have a disruptive effect on driving comfort, depending on the length of the leg.

So what’s left? The realization that this plane has what it takes to establish itself as a really fiery sharpening iron among the mid-size nakeds. The 95 hp are always sufficient because they are served refreshingly dynamic. When it comes to the coordination of the spring elements, there are still slight question marks for the time being, just like with Aprilia’s equipment policy. Nevertheless: The first rumble of thunder of the new Tuono 660 was convincing!