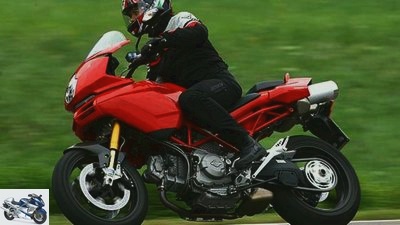 Oil bath instead of dry clutch, more displacement and more torque for full punch from the cellar to high altitudes: the 2007 model year Ducati Multistrada 1100 is mature and aggressive.

The sparrows are now whistling it from the roofs: Ducati is going for more displacement next year. This is especially true for the eagerly awaited successor to the 999. But with regard to their new super athlete, the Bolognese do not want to give out any information before the November fair in their own country, the Eicma in Milan.
The facelifted, large Multistrada with almost 100 cm3 more displacement, which MOTORRAD has already been able to drive in Italy, is already coming in early autumn. Externally unchanged, the Multi now has 1078 instead of the previous 992 cm3. Pistons four millimeters larger result
a plus of two hp with unchanged stroke, the 1100 is homologated with 86 hp. However, the slightly increased peak performance is less important in everyday life. All the more for the decent increase in torque: The new one creates a maximum of 102.9 Newton meters, which is 10.7 Newton meters more than its predecessor.

And with that comes real joy. From the start, the 1100s storms
furiously going on, showing no nakedness on well-developed, fast country roads, in other words: performance slump. The maneuverability did not noticeably suffer from the increase in displacement, rather the smoothness below 3000 rpm. The strength of the revised engine is clearly in the middle range. The Multistrada is preferably kept at speeds between 4000 and 5000 rpm, where it is in top form. Whereby the two-valve engine also delivers a lot of pressure in higher positions, the limiter cuts the power output abruptly only just below 9000 revolutions. The 1100 Multistrada accelerates smoothly and smoothly out of the corners with beefy torque, so you can save yourself some gear changes.

Apropos shifting: Instead of a dry clutch, a multi-disc oil bath clutch now performs its quieter role in the two-cylinder. Gone are the days when drivers looked at you at the traffic lights as if you weren’t quite up to speed with the gearbox ?? the typical clutch-
rattling is a thing of the past. And the dosage when starting up is also better. Whereby the actuation force is still quite large. The six gears engage precisely. The new engine, which is homologated to Euro 3, does not seem clogged in any way. Don’t worry when it comes to sound: it stays pleasantly deep throbbing without being intrusive. Only a test can show how the lean Euro 3 vote affects fuel consumption.

In the fourth model year, the Multistrada now slowly seems to have matured. Has teething problems like the fluttering fork of the first models Ducati gradually healed. The Pirelli Scorpion Sync, on which it now rolls, also harmonize well with the Italian fun bike. Only the seat will still be too hard for some, despite the fact that it has been repaired in the meantime.

What else is new? An elastic mounting of the handlebar ensures slightly less vibrations, a second sensor in the tank for a more precise indication of the amount of fuel. In the basic model, Showa elements are no longer used, but a Marzocchi fork and a Sachs shock absorber, both of which are fully adjustable, while the more expensive S version still has perfectly appealing Ohlins components that spring and dampen. In addition, Ducati extended the service intervals ?? not just for the Multistrada, but for all models (see interview on page 22). Nothing has changed in terms of prices: 11,545 euros for the basic version, 13,045 euros for the Ohlins-equipped and carbon fiber-pepped S version. The Multistrada 1100 from October on.