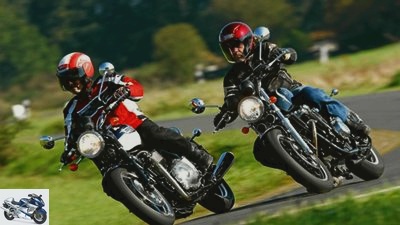 Fans of top speed, horsepower hype or maximum lean angle can now turn the page. However, if you are looking for something to love, be sure to read on.

Which? No matter. That’s not what it is about. Because you fall in love with a Honda CB 1100 or Triumph Bonneville because their designs inspire hearts. The attraction of such motorcycles lies not only in their appearance, but also in the fact that they were trendy forty years ago and will be so in another forty years.

M.ith this much-vaunted rock in the surf, the manufacturers treat them very differently: While the Bonneville is available from virtually every Triumph dealer, the German Honda importer has not even decided to bring the CB 1100 into the country. Even for fear of unsuccessfulness, it is not offered anywhere in Europe, but only in Japan and Australia. This fear could be based on: 88 hp maximum output, 247 kilograms with a full tank, around 13,500 euros. Translated: too little performance with too high empty weight for too much money. Did any of those responsible ever think that maybe many would fall in love with the CB?

Bonneville – the English parallel twin bolt owes its name to a speed record set in 1956 on the Bonneville salt lake in Utah / USA. The Bonnie celebrated its resurrection in 2001, when it was still 790 cubic meters. In the meantime, the displacement has been increased to 865 cm³ through an enlarged bore. Which is noticeable in a positive way. The British twin can be driven beautifully at low revs. Already at 1500 rpm you can shift into the next higher gear and let yourself be boggled forward without any problems – no chopping, no jerking. The gurgling, sonorous babble from the conical, chrome-plated silencers is a symphony for engine-loving ears. Two balance shafts curb excessive vibrations, and somewhere between 4000 and 5500 tours, the twin and rider feel most comfortable. For the maximum output of 67 hp, however, you have to turn up to 7500 rpm. What seems tough is that the engine doesn’t like high speeds at all. But the machine only demands this for excessive overtaking maneuvers.

When switching from the British to the Japanese, differences in the vibrations are immediately noticeable. Like the twin, the four-cylinder is equipped with two balance shafts. Its unbelievably smooth, soft and low-vibration run is exemplary. While the short engine and crankshaft is largely identical to that of the CB 1300, the air-cooled cylinder and the cylinder head have been redeveloped. A sophisticated cooling air duct between the cylinders and the use of a large oil cooler enable the lean engine tuning required to comply with today’s emissions standards. The 1141 cm³ four-cylinder is miles away from the punch of a CB 1300 unit or a Suzuki Bandit 1250. Between 1500 and 4000 rpm it runs properly, from 4000 rpm the fire blazes, and above 6000 rpm it runs out of breath a little. No matter. The maximum of 88 hp at 7500 rpm are completely sufficient.

Top performance doesn’t count. The charm is more important. While the Honda four-cylinder shines with its ultra-smooth running of the engine and silky smooth implementation of the gas commands, the Brit captivates with a rather rough charm. With it, not only are the crankshaft revolutions more noticeable, it also has more outrageous load change reactions. Both units have in common the fact that they are not designed for maximum performance. You can feel that. It is a mechanical mind that draws its strength from serenity. If that is too cryptic for you, you will sometimes find an answer in the technical finesse of the CB 1100. In order to conjure up the characterful run of earlier air-cooled four-cylinder engines, the Honda designers reached into their bag of tricks: The inlet valves of the two cylinders on the left close ten degrees earlier than those of the right, the ignition times are adjusted accordingly.

But: Can the serenity of the drives be implemented one-to-one when driving? Clear yes. Both models produce their feel-good power in the middle of the speed, which is very relaxing. Both can be driven extremely carefree. However, the handling shows differences. Although the CB has exactly 40 pounds more on its ribs than the Bonnie at 247 kilograms, it steers more precisely and more directly than the British. In general, when it comes to chassis, the 1100 doesn’t show any nakedness. The spring elements respond cleanly, dampen sufficiently, offer good feedback and the ABS-assisted composite brake system decelerates powerfully. In these achievements, Bonnie falls a little behind. The Triumph brakes still deserve a satisfactory plus, but the chassis only gets an insufficient.

There is simply a lack of cushioning and feedback. Unfortunately, the Bonnie does not quite come close to the light-footedness with which the CB moves on the ideal line. But that’s not the point. Love cannot be explained. And if we are to be completely honest: After half a day on one of these bikes you have got used to the negative characteristics. You will be able to live with them just fine. Like in a good partnership.

Both motorcycles create the feeling of timelessness – the state of having finally arrived. It is priceless. Due to the uncomplicated driving behavior and relaxed seating, both are suitable for novice drivers or those returning to the sport. Choosing a winner from this pairing would be unfair, the eye and the cylinder preferences are guaranteed to be in the foreground when choosing. Seen objectively, the CB 1100 is the better, but unfortunately also more expensive, choice due to its more successful suspension setup and more effective brakes.

Both motorcycles create a feeling of timelessness – the state of having finally arrived. It is priceless. Due to the uncomplicated driving behavior and relaxed seating, both are suitable for novice drivers or those returning to the sport. Choosing a winner from this pairing would be unfair, the eye and the cylinder preferences are guaranteed to be in the foreground when choosing. Seen objectively, the CB 1100 is the better, but unfortunately also more expensive, choice due to its more successful suspension setup and more effective brakes.

For fans of the classic line – from the tank emblem to the bare housing cover.

? Mr. Bonsels, how successful is the Bonneville?

! Very successful. The Bonneville models currently account for around 15 percent of our approvals in Germany, and the trend is increasing. In this context, it is interesting that the modern classics market segment is one of the few that can still record growth in Germany and Europe. We currently have a market share of over 30 percent in this area. Not bad for a niche manufacturer, as we think.

? How do you explain this success??

! There are several reasons for that. It is certainly decisive that we have managed to authentically transport the spirit of the old Triumph models into the present. The Bonneville is a technically state-of-the-art and therefore reliable and easy-to-drive motorcycle that is also popular with novice drivers and women. The look, however, is absolutely authentically retro and thus corresponds to the current trend towards the 1960s and 1970s in fashion, music and lifestyle in general. In other words, the Bonneville is right on trend.

? One can therefore assume that Triumph will expand its range of models in the retro bike sector?

! We are already pretty well positioned in this segment. Of course we will monitor the market development very closely and react accordingly.

Norbert and Barbel Wagner started trading parts and motorcycles in 1989. The mathematician, who studied maths, got the idea after the opening of the border, when the motorcycle market suddenly boomed again. By participating in veteran races, Wagner acquired his first basic knowledge of screwing motorcycles; meanwhile no screw or electronic circuit is foreign to him. The couple from Buseck near Gieben have been importing Japanese models since 1993, which are almost impossible to buy in Europe. For this, the family uses a well-functioning Japanese dealer network. The two hope that the CB 1100 will attract a great deal of interest, despite the lavish price of 13500 euros. In addition to the exchange rate, the final price is, however, not insignificantly influenced by the costs of the reports on braking performance, exhaust gas and noise. Contact and further information: Telephone 06408/3414.