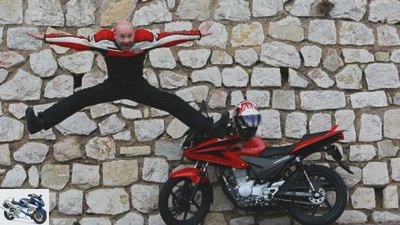 Duck, it’s going downhill! Estimated ten percent gradient. The speedometer needle trembles, struggles infinitely slowly over the 130 mark, approaches the 140, then stops at around 135 km / h. Honda’s new CBF 125 is surprisingly quiet. Darn it, the descent is over. And the following straight takes the momentum. The top speed should be 104 km / h. Get there, because the leading speedometer no longer reports more than 110.

But stop! Actually, it’s not about speed at all. It’s about Honda’s rejuvenation for the eight-liter segment. Since the XR 125 and Shadow 125 have been withdrawn from the range, the 2100 euro CBF 125 all-round bike is supposed to close the gap. The price is around 900 euros below the CBR 125 and only 250 euros more expensive than the ANF 125 Innova, the economy vehicle that appeals to mature people, but is less accepted by young people. The chances for CBF are much better. She is a frugal packhorse with charm and can be seen. Compared to the petite CBR, it looks more adult. The handlebars are wider, the fairing more opulent, the wind protection better, the saddle slightly higher in terms of feeling. And the engine is powerful. Even more robust than its water-cooled, stronger brother in the CBR. No wonder: the air-cooled CBF drive develops three horsepower less, but has a higher torque, which is also applied much earlier. It is not enough to tear down trees, but rapid progress is always assured. 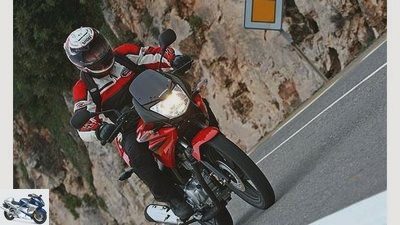 Inexpensive entry-level bike that is impressive: the Honda CBF 125.

The four-stroke engine hangs very cleanly on the gas and surprises with its power in the lower and middle speed range. The maximum output is 8000 rpm. At high speeds, the footrests and the tank tingle a little. Otherwise, the CBF is extremely cultivated. The gears lock precisely and safely, the throttle can be turned with virtually no resistance, and the clutch works as smoothly as if the slats were being pressed together by three ballpoint pen springs. Neither the two-valve engine nor the chassis from CBF are new developments. The machine has proven itself for a long time in India, where it is also produced. Upgraded with the fresh, attractive design, equipped with a three-way catalytic converter and injection system, as well as a spacious cockpit and cast rims, does it continue to roll off the production line there ?? even in various equipment variants. Impressive.

It is also impressive that you can hardly blame the little ones for anything. The brakes can be relied on despite the rear drum, the suspension works comfortably, and turning is extremely light-footed. Overall, you have a good feeling. When it comes to tires, both the Indian TVS ATT and the newly developed Conti Go! for original equipment. If you believe the factory specifications with 2.2 liters of consumption per 100 kilometers, the route Munich – Cologne could easily be covered with one tank of fuel: with a 13 liter capacity, that results in a range of 590 kilometers. Only the quality of welds and paint must not be examined with a magnifying glass. In this regard, the pre-production model that was driven was less likely to win prizes. From January 2009 the CBF will be in German shop windows. A throttle kit to 80 km / h is not planned ex works, the supplier industry will take care of that. Honda is confident and wants to sell 12,000 copies across Europe. 2000 it should be in Germany. Will it work? Yes, they can! 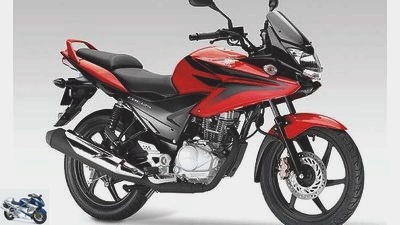