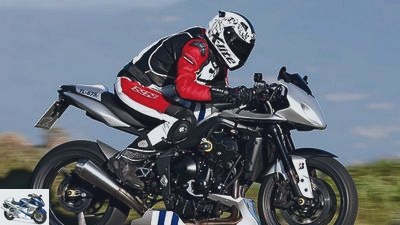 This conversion of the Triumph Street Triple makes motorcycling seem like flying on earth. Airy, light and agile. In addition, precise like an arrow and beguilingly beautiful. Simply sleek, the TL-675 from LSL really turns you on.

Exactly 70 years after the Battle of Britain, a first turning point in World War II, you can feel like a fighter pilot in the 1940s aboard this dynamic Triumph Triple. The American P 51 Mustang aircraft inspired Jochen Schmitz-Linkweiler, head of the Krefeld tuning company LSL, to "TL-675 Warbird". The silver paintwork including war paint, the blue and white, is borrowed from the Mustang "Invasion strips", how they served the Allies on D-Day, the invasion of June 6, 1944, to identify friend and foe in the hustle and bustle in the sky.

"Warbirds" Today the veterans from the Second World War who are admired at air shows are called because they have their own aesthetic despite everything that is destructive, and because they stand for top technical and flying masterpieces.

Monoplane: This hunter of a motorcycle doesn’t have pillion pegs, but a great seat cover.

The engine tuner G-Lab took care of the torque-increasing tuning. The improved the intake ducts, increased compression and machined the crankshaft. So why didn’t Schmitz-Linkweiler install the Daytona 675 engine, including its higher output of 125 hp? Because he didn’t want a barrel organ, he wasn’t interested in high top performance, but a strong middle, optimal drivability. It is possible that the Zard exhaust system is not entirely unrelated to the performance characteristics. Your rudimentary muffler is short and cuddly, sounds robust, but by no means rowdy, and the system has an EG-ABE. The triple trumpets its joie de vivre without taking it away from the residents, assuming a moderate driving style. Especially since the pilot, and only he alone, can enjoy the wonderfully groaning snorkeling in the air. The compact exhaust system also contributes to the great handling, as a replacement for the heavy, high and rear-mounted series silencers.

The sporty, combined seating position with clip-on handlebars and the recessed footrests are reminiscent of cafe racers from the 1960s. Comfortable when driving fast, still reasonably moderate when strolling. Like the handlebar stubs, the footrest system naturally comes from the company’s own range of accessories.

Because LSL did not use the better equipped R version as the basic machine, but the standard Street Triple, they also put their hands on the chassis. The fully adjustable Ohlins shock absorber with reservoir is a poem in suspension and damping. It responds well, works aggressively and reliably keeps the rear wheel on the ground at all times, even on difficult slopes.

The coated upside-down fork, which comes from a Suzuki GSX-R 750, is also very sensitive. At a "R."-Version with adjustable chassis as standard, you can easily save yourself this conversion, the spring elements work at a similar level. The four-piston stoppers transplanted from the GSX-R together with the fork look almost as brutal as a braking parachute. Care. Especially since the Bridgestone BT 003 Racing Street supersport tires have a hard time building good grip in the cold.

The sleek fairing was originally supposed to be created from the clipped nose of a glider, but this could not be realized. So LSL quickly designed its own shape with a single ellipsoid headlight. The GRP side panels between the tank and the bow should reflect the profile of a wing and at the same time continue the shape of the tank. Everything with the finest surface quality. Only the inside of the cladding still shows the rough laminate layers, which was due to the short construction time. In fact, an interior trim is still planned, which is to follow in the small series.

It was important to Schmitz-Linkweiler not to cover up the technology with plastic: "The 675 triple is presentable." And it succeeded. Even if there are still a few small details to improve. In the prototype, for example, the distance between the front wheel and the front spoiler was too small; hard braking resulted in rough contact. A shortcoming that can be easily remedied, just like the sharp-edged, frayed, provisional-looking edges on the front spoiler and in the window, which will certainly be optimized in the series. So that the fast low-flying aircraft is as fun when it is stationary as it is in action.

Not included in the price on the other hand are engine tuning and the upside-down fork of a Suzuki GSX-R 750 including its radial four-piston brake calipers. The fully adjustable Ohlins shock absorber with expansion tank (960 euros), adjustable, finely milled LSL hand levers (219 euros) and the "2Slide"-Footrest system including sprocket cover. Assembly in Krefeld costs 840 euros, including entry in the vehicle documents.