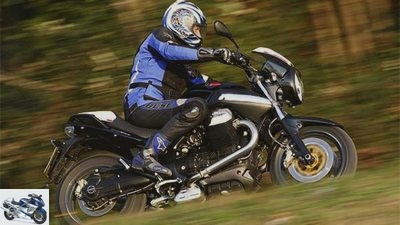 means where the eagle lives. Eleven kings of the skies have found a home in the latest creation from Lago di Como. Does the Guzzi do what the heraldic animal promises?

The eagle has probably never got over one with such density M.Made by oto Guzzi.

For statisticians: gas cap included, four eagles emblazoned on the 23-liter barrel of the Sport 4V, one for each cylinder head cover. It continues with the rear light (now in clear glass look), cockpit and fairing. The last two copies are camouflaged on the lower triple clamp and the engine cover on the front.

The eagle is said to have strength, courage and vision. Guzzi can use all of this in the current situation, because owner Piaggio wants to close the traditional plant in Mandello and relocate production to the main plant in Pontedera.

However, Guzzi’s youngest offspring would have enough power without the support of the eleven company crests, but unfortunately not over the entire speed range. Its 105 hp four-valve engine is identical to that of the Stelvio (see MOTORRAD 19/2008). Only the airbox and exhaust were modified, which gave rise to the hope that the athlete would be spared the uncomfortable acceleration of the travel enduro. But under 5000 tours you expect more pressure from a modern 1.2-liter engine. This is what happens then, with the maximum torque at 6750 rpm and the maximum output already 250 revs above. For brisk progress, the six-speed, easy-to-shift gearbox has to be used more often than is good for sovereignty. The clutch, like the brake operated by an adjustable lever, works exactly and with a reasonable use of force. The 4V has to do without wave brake discs (as with the two-valve engine), but the system still works well, even without the optional, 1000 Euro ABS.

Found: one of the eagles. This is what a picture book cockpit looks like: white background, black numbers, red needle. Finished

Regardless of its name, the Sport is not a race car, but a talented country road power cruiser. What is also emphasized by the seating position: With the upper body slightly bent forward, the driver stretches towards the handlebars, which are far forward and modified in width and cranking. Once used to it, you still feel cozy behind the high tank, although the narrow knee angle is uncomfortable in the long run.

Apart from that, there was little reason to complain about the driving characteristics of the Sport when I first met it. Particularly noteworthy is the Metzeler Sportec tires, which build up confidence-inspiring grip even at single-digit outside temperatures. Less commendable, however? at least from the perspective of inveterate Guzzisti ?? is what happens after you press the start button. Almost nothing! No shaking, no shaking, no puffing, and no trembling like you’ve read in dozens of Guzzi stories. It just starts. Without a fuss. Only the valves tick a little. Looks like the eagle has landed. In the present.

Plus:
Extensive equipment, practical
Long range, thanks to a 23 liter tank volume, 400 kilometers are in it
Chassis firm, but not devoid of comfort
Originality as probably the last Guzzi from Mandello

Minus:
Manageable torque up to 5000 rpm
Mirror not very considerate
Handlebars far from the driver
ABS expensive with 1000 euros surcharge