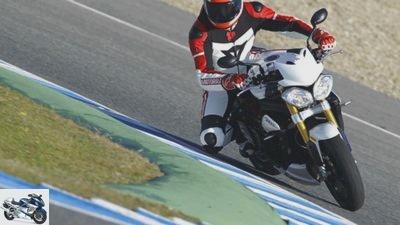 The mother of all street fighters is not enough for you? Do you need it more radical, better, more expensive? Then the new Speed ​​Triple R should be just right for you. It has more to offer in many ways.

Manufactured by Fuchs, processed by PVM: The filigree forged wheels are a German co-production.

Of course it had to be that way. In view of the sales situation in the other model series, Triumph had no choice. Fifty-fifty – this is roughly how the popularity of the Street Triple and Daytona series can be summarized. Half of the top-selling R models. It should be possible to give the Triumph Evergreen a little more “R” in order to increase the number of items and sales.

So from February it will be available, the new Triple R. And to prove that this additional R in the name means more speed in every respect, Triumph presented the Brit rocker in racing twist on the demanding GP course in Jerez, Andalusia . “Oops”, one or the other might think, because so far the Speedy has attracted more attention as a formidable country road expert than as a track queen.

But they help a lot further, whereby the posh five-spoke rims will certainly be felt more clearly in the angular work of winding country roads than on the Jerez slope, which is blessed with many fast and fluid passages. The urgently needed gearbox modifications, on the other hand, are present here and there from the first meter and allow precise, but also smoother gear changes than was previously the case with the standard Speedy (these modifications have already been incorporated into the gearbox).

The finest: The Ohlins fork was specially designed for the Speed ​​Triple, the brake calipers are one-piece.

The speed-triple R is not exclusive to the brisk switchboard, but the Ohlins chassis does. The cooperation with the Swedes was very close, emphasizes Triumph project manager Simon Warburton. Together, in extensive test drives, they found an ideal set-up that meets both civil and racetrack requirements.

In detail: the 43 mm NIX30 fork with 30 millimeter damper pistons and compression and rebound adjustment separated by the fork leg has fortunately a moderate spring rate of 95 kilograms (standard 90 kg), and the TTX shock absorber is also equipped with a 100 kilogram Spring (otherwise 95 kg) by no means exaggeratedly hard. Together with a damper setting at the front and rear, which is adjusted more for sporty country roads than for race track use, this results in a wholesome blend of fine responsiveness and necessary damping reserves, which is what characterizes high-quality spring elements.

And how they go perfectly with the easy-going character of the Speedy-R. Yes, sociable – even if one or two street fighters might not want to hear that. For example, the smoothness with which this mighty, 137 HP strong threesome accelerates in the last MOTORRAD measurements, the linear power delivery, the fine clutch metering, the neutrality with which the Speed ​​Triple radii of all kinds rush through – that’s also great in southern Spain like in the northern Black Forest and does not differ in any way from the qualities that we are used to from the civil sister. Just as little as the ergonomics, because it sits no differently on a red rear frame than on a black one, and the butted aluminum handlebars feel comfortable in the hand regardless of the new riser.

Other differences? In a direct comparison, the one-piece brake calipers may be even finer than the two-piece calipers of the civilian Speed ​​Triple, but they are always stable and cannot be brought to your knees here in Jerez. The standard Pirelli Supercorsa SP may be a bit more manageable than the Metzeler Racetec K3, but on this fascinating course they inspire above all with their seemingly unlimited grip and perfect transparency. And the carbon applications (radiator cowling, tank covers) may be a little lighter than conventional plastic, but in the Spanish winter sun they shine above all because of their fine finish. So the bottom line is that the Speed ​​Triple R remains a Speed ​​Triple. And so it is clearly geared more towards civilian use than chasing seconds on the racetrack. This becomes clear, for example, from the fact that the Triumph men in Spain not only switched off the standard ABS (via a button in the cockpit), but also removed the fuse. “Only partially suitable for the race track” is what Triumph circles say. Well suited, but not ideal – this attribute also applies to the 1050 triple, whose robust acceleration in the lower rev range you would like to swap for a larger rev reserve on the Jerez slope. Again and again the limiter interrupts the forward thrust at a good 10,000 rpm.

However, this does not detract from the basic fun that this Speed ​​Triple provides on the slopes. The “R” pulls its course confidently, attracts more lap after lap, impresses with its muffled triple sound (especially with Arrow accessory silencers). Only on the brakes is the occasionally wagging rear end noticeable, an anti-hopping clutch is not part of the scope of equipment. Which brings us to the only sad chapter in this story. Triumph requires 14,990 euros for the Speed ​​Triple R. That is a whopping 3000 euros more than the standard model. A hefty surcharge for a few goodies that you like to take. But not absolutely necessary.