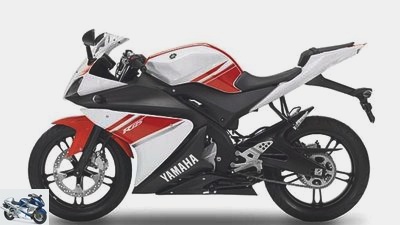 The year is 2028. 20 years ago Yamaha presented its revolutionary 125cc. A fan from the very beginning remembers …

It started with a question about a photo in the internet forum: “Why the hell does the driver look so small?? Is that a ten-year-old? «In autumn 2007 someone had found pictures of the new YZF-R 125 and posted them online. The question was easy to answer: Yamaha’s 125cc was huge. Looked as aggressive as its twin sisters R1 and R6 and went on sale in late March 2008. On the first day of their delivery, I stood at the counter in the “bike corner”, took over the vehicle documents, and my father signed for an extended test drive. A split second later the helmet visor was fogged up, I was so excited. The R felt weird and freaky. Absolutely grown up. Low-lying handlebar stubs like on a real racer, the tank narrow, the seat not too wide, the footrests exactly where I would have attached them myself. Even when you tried to sit, you felt two years older. Push of a button. Quiet bubbling from the pot. Damn it, a false one, sorry: four-stroke engine! Despite the Euro 3 emissions regulation that was in force at the time, two-stroke engines were the most popular among my clique.

The hottest guns were called Aprilia RS and Cagiva Mito. Does not matter. This Japanese dream here was realizable, because at 3595 euros that was Yamaha around 1700 euros cheaper than the Italian divas. And only 460 more expensive than Honda’s CBR. I opened the shower head on the main street. Rottotott ?? rather than expected the rev limiter closed. Switch, switch again. You still had to work on the sound, okay, but the gears slipped well, coupling was child’s play. Only the tachometer cut the acceleration like a samurai sword every time ?? because the engine turned so incredibly smoothly, below 6000 rpm you hardly noticed that it was on. This was due to the newly developed four-stroke engine, which, in addition to water cooling and four valves, also had a balance shaft. It practically removed all vibrations. After five minutes I was on it. Although the limiter bit relentlessly at 10500 rpm, a high-pitched sound came from the engine around 500 revolutions beforehand. It was easy to remember. We later named it Schaltschrei. Then it was in front of me, the open street. I pulled through. First, second, third, fourth gear. Yippie! This was the open version with 15 hp. 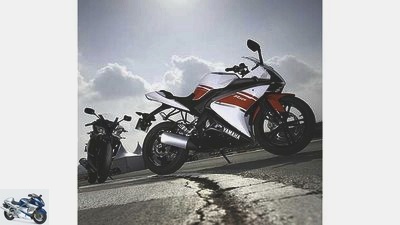 15 HP and purrs like a kitten – the new four-valve engine is fed via a large airbox and injection.

Fifth gear. Turn out. Crazy, the speedometer showed 117 km / h. I did the math. Of course, the R had a six-speed gearbox like its sisters. If I turned the engine off … Like so many hopes in life, this one was a false one. Not much happened. Then came the slight depression. I was stuck behind the dome like Casey in fetal position when he and his MotoGP Ducati cracked the 330 mark. And the R fought its way up to 128 km / h. You could rely on the brakes. A 292 mm disc in front, a 230 mm disc in the back. The little super sports car weighed only 138 kilograms with a full tank and could always be safely caught again. Even if my father missed so-called steel braided lines. Incidentally, he had briefly gestured at the technical data in the shop and mumbled: “Ah, long-throw. I’m sure it will pull through … «Well, the engine really hung on the accelerator. Up to 6000 rpm it ran in truancy mode, above that life came into the case, and between 8000 and the switching scream, the R was as ecstatic as our girls at a Tokyo Hotel concert near the stage.

I turned into the place where we always met after school, speared the R between Frank’s CBR and Tobis Mito and hardly got out of the saddle with pride. Frank’s box looked next to the other two as if Merkel were standing next to Rihanna and Paris H. In no time, the R was surrounded by onlookers. My appearance. I was well prepared and lectured: “Mighty delta box frame made of steel, gold-colored brake caliper from Brembo, massive aluminum swingarm with upper pull, feather-light ten-spoke rims, stubby exhaust in MotoGP style.” Two-meter ant had spotted. Tobi said: »130 slippers in the back ?? this is not a tire, but a street insult. Then the stern! LED lights? Looks like it is ?? hit you on the back. And the license plate holder? this is a parking space button. Another thing: injection with a three-way catalytic converter? That will be difficult with tuning «. The good thing about envy is that it can’t hold back the sparkle in your eyes. Frank had crumbled into the corner and was learning a table top by heart all the time, motionless and melancholy. Tobi looked after me for a long time as I sped off. The R was a real asset. Their grown-up look was no coincidence. While Honda’s CBR was developed and produced in Thailand, the R came from Europe.

Literally adults had worked on it. The prototype of the R pilot measured 1.75 meters and weighed 75 kilograms. Everything was designed for that. Nevertheless, smaller and lighter riders like me got along very well. Three weeks later the R was in our garage. Financed for two years, 158 euros per month. The first thing I did was scratch the 125 logo off the fairing. After that my mother really wanted to ride a lap on the back. No problem. The R was allowed to load 185 kilograms. My mum wasn’t interested in weight watchers at the time. Nevertheless: The rear suspension could have been harder. There was little that was not possible with the R. For example, high starts. The clutch didn’t like that, it looked somehow muddy. Burnouts, on the other hand, worked without any problems. From then on I was greeted by every biker. And at the meeting point I was able to place them next to a thousand without being laughed at. One day after buying the R, Jenny finally became my first friend. Two days later we drove out in the gang. But that’s another story. 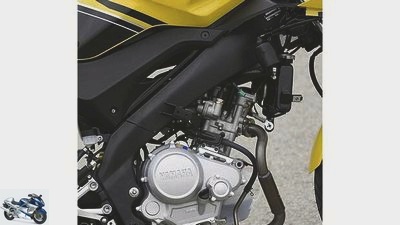 The engine of the Yamaha YZF-R 125 ran smoothly and was very easy to turn.