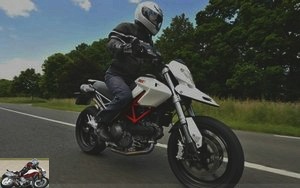 The Hypermotard is literally revealed in its pearly white 2009 livery. We find a mixture of curves underlined by the saddle and taut lines with in particular the trellis frame, the small wheels, the front fender in two parts (cut flush with the wheel and above). The single-sided arm is the most beautiful effect. Once again, the designer Pierre Terblanche has managed a magnificent stroke of the pencil!

The folding mirrors are placed in the exact horizontal line of the wide right handlebars: original and aesthetic, even rather effective day to day. Only the plastic adjustment knobs clash a bit. Note the turn signals integrated into the handguard.

Despite its 845mm height, the relatively thin saddle is almost easily accessible for the 1.70m rider. It is therefore lower than the Dorsoduro and SM 690. The impression of exterior finesse is confirmed on board with an overall lightness. The Hypermotard weighs only 179 kilos on the scale, no less than 17 kilos less than a Multistrada. It really doesn’t feel like you’re on an 1100.

The wide handlebars fall well under the hands with a relatively upright position. The knees find their place on the sides, without any roughness.

The saddle is almost soft, at least in appearance, with plenty of foam for both rider and eventual passenger..

The sound that comes out on contact is enchanting, serious, hairy. The first turns of the wheel are smooth. In fact, the engine seems much more flexible than the Monster, accepting to resume without knocking from 2,000 rpm.

The Hypermotard is almost ideally out of place in town. We imagine an 1100 would be too big for this game, but its size and balance make it an ideal weapon. He even agrees to go into the last gear at 50 km / h…. that is to say! The ideal pace remains between 2nd and 3rd gear, even if 2nd gear only breaks at 110 km / h…. and therefore well beyond legal speed in town.

In terms of agility, it’s just top notch. U-turns are done in a pocket square and in smaller streets, with a much better turning radius than the Monster or Multistrada, to stay in range. The motorcycle remains a rail in all circumstances. And as the mirrors fold, the Hypermotard goes through every mouse hole in town.

The Hypermotard sets off vigorously on the motorway. We can not say that the protection is there, but the speeds possible with almost no effort already allow you to say goodbye to your license. Road holding remains excellent, even on fast curves. 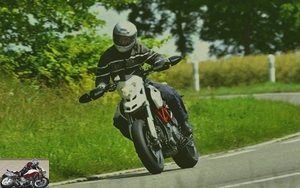 But if the Hypermotard is comfortable in the city, and willingly accepts the motorway, it literally lets off steam on small roads. The flexibility of the engine allows in addition to choose its rhythm and to alternate between driving coiled on the last report everywhere, including crossing of the village (50 km / h possible on the last report) and arsouille bleeding on the 2nd and 3rd report . The 2nd gear only breaking at 110 km / h and the 3rd at 140 km / h leaves speed possibilities well beyond the legal speeds. In the extreme, the Hypermotard is made for lazy people, almost allowing you to forget about gears and even agree to stay on 2nd or 3rd gear. It picks up at any speed and literally takes off after that, especially from 5,000 rpm. As much as the Monster 1100 has a fairly small ideal range of use, the place of use of the Hypermotard is almost possible over the entire available range from 2,000 to 8,000 rpm, even if it lacks a bit of extension while at the top. Compared to the Monster, one would rather have imagined the opposite, a long range on the Monster and smaller on the Hypermotard; it is not so.

In addition, with significant ground clearance and high footrests, the Hypermotard can take impressive angles. 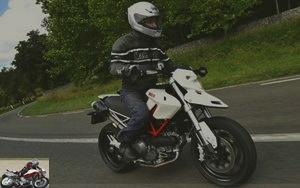 The test ended on the La Ferte-Gaucher circuit and even on this ground, the Hypermotard is doing very well. She lets herself be violated without complaint, always showing healthy behavior. The trajectories are natural and the pin outs are powerful, aided by the huge curve. The best go on the slopes, but always under control and without surprises. Even the original tires fitted in BT016 handle this terrain quite well..

The rear brake is a decent retarder that can suffice in town. The front brake offers a good feeling and progressive power. At most, we can blame a lack of bite, but at least the braking is easily accessible and without the need to dose.

The Hypermotard has a small 12.4-liter tank, like most supermotons, which are often limited in capacity. And yet, the average consumption of 5.5 liters allows a range varying in 200 and 250 kilometers depending on the driving mode..

Supermot mode, the fuel cap is not integral and can be removed by itself.

There is no room under the saddle. There is no grab handle. The tank does not allow to put a magnetic bag. 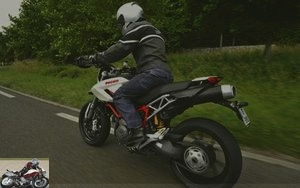 The Ducati Hypermotard is a real success, offering enormous ease of handling despite the displacement and seat height, to make it a really fun machine. It also offers real flexibility for a Vtwin, so much so that it is more pleasant in everyday life than other 1100cc Ducati. Only its price can hurt, because at 11,535 euros (13,565 euros in version S), it is in the upper range of models of this type.