The saga continues with the Monster 796, which appeared with surprise in 2010, but with an L-shaped twin fitted to the 796 hypermotard, a frame borrowed from the 1100 and an identical line shared by all the Monsters. The family is expanding and now covers the entire beach. Placed between the 696 and the 1100, what does this new model reserve, not really halfway but precisely very close to the 696? Better ? Less good ? Test…. 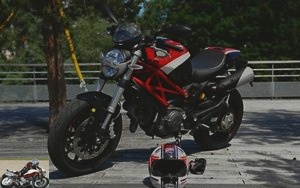 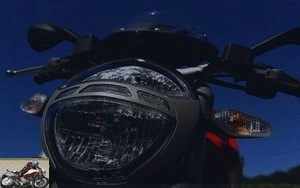 It is really difficult to tell the difference to determine the model and the displacement…. except by cheating. A discreet 796 logo adorns the top of the tank. On closer inspection, there are differences in the color of the rims, the Ducati logo on the gearbox but also the redesigned saddle and red stitching on the edging, the width of the tires …. 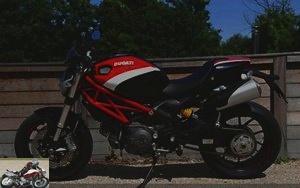 In short, you have to have your nose on it. And then there is the logomania…. the Monster comes in 7 variations…. here in full bodied version. 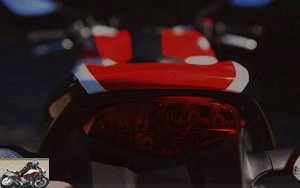 On the counter side, we therefore find the same dashboard, fully digital with the tachometer overlooking the whole. Clock, totalizer, partial trip, reserve trip, battery voltage, chrono, shiftlight, DDA (Ducati Data Analysis) pre-equipped…. and still no fuel gauge or gear engaged. That’s good, but with the driving position, still so difficult to read. On a daily basis, you have to look for the indication for the speed, especially when approaching a radar. 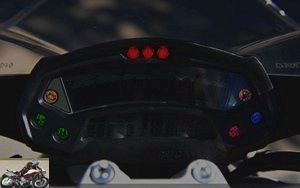 The feet almost touch the ground for the 1.70m pilot, and more easily than with the 1100; necessarily the saddle of the 796 was lowered from 10 mm to 800 mm. The very wide handlebars lead to spread the arms. On the other hand, it has been raised by 20mm compared to the 696 and 1100, so you don’t have the impression of being tilted forward with your head in the speedometer. The bust is still slightly tilted forward but the position is less exclusive and more natural, especially since the triangle formed with the feet is quite natural. 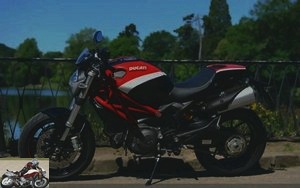 The Desmodue twin snorts with a low growl. Is this pot approved? hum…. in any case, he sings already.

First…. a little brutal but the Monster snorts naturally and climbs quickly in the towers, asking to pass the second rather quickly … It appears as light as a 600 …. and this is also the case with its only 167 kilos (dry). 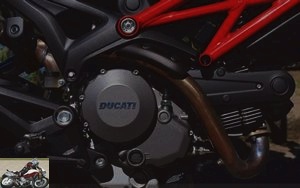 The Monster oscillates between first and second in a natural way…. and at least it is not systematically in the red zone as with the 696. The first still climbs to 85 km / h and the second to 125 km / h…. therefore not in town. In fact, we do not need to pass the 3rd gear, nor the following ones…. although it is possible to lock into the last gear at 50 km / h and 2,000 rpm. The bi then bangs violently at the request of the throttle but is released from 3,500 rpm. 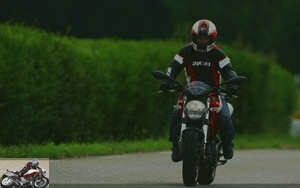 With its huge lever arm due to its wide handlebars, city driving is easy and U-turns possible in a pocket square. It’s so light that everything is done effortlessly on balance even though the turning radius isn’t the shortest in its class. On the other hand, the mirrors are even wider than the very wide handlebars. And suddenly, sneaking between cars without touching is almost acrobatic. Folding the mirrors then becomes compulsory. It is all the more unfortunate that they perform their function quite well and do not vibrate at all regardless of the regime..

The pickups are clean and dynamic, and as if helped by the song of the double escapement. There are motorcycles like these that encourage you to turn the throttle, for fun and enjoyment. A push to crime I tell you …. 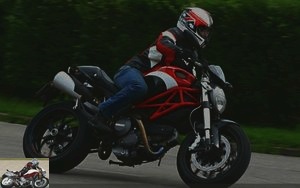 The protection provided by the bubble is reasonable without being exceptional. In any case, it is possible to drive fast enough to lose your license and to stall at around 150 km / h without worry (except in France).

In terms of comfort, the saddle is comfortable but the Monster quickly asks to get out of the hell of the law. 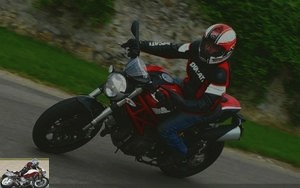 It is therefore with some relief that the bike is back on the main road, agreeing to wind at 3,200 rpm at 90 km / h in the last gear. But for those who want to have fun, it is possible to go down 2 or 3 gears to hear the melody of the engine which literally flies away in the towers.

It grows, it even grows very hard…. and when the turn jumps in the face, the brakes are there…. and what brakes! The rear is a good retarder, which stabilizes the bike well. In addition, it does not block even when pressing hard. The front end has an extraordinary and secure sporting bite with an excellent feeling. Suddenly, the pace picks up, if only to appreciate the trapper’s braking that it is possible to achieve…. to the detriment of bells which easily hit the tank. He would be given almost 100 horsepower while the block only displays 87 horsepower, well whipped.

You just have to throw the bike into the bend and the Monster here accepts being particularly roughed up…. or even accepts improvisation with a rigid framework that takes it all in. The bike goes just where the eye is, naturally, alternating from left to right with ease. The suspensions at most will show their limits on rough roads. 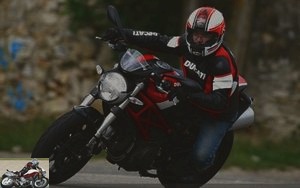 The rear brake sits the bike well and is more than sufficient in town and does not block easily. The front brake offers both excellent bite and a very good feeling…. allowing you to brake hard and dry without worry for a particularly short stopping distance, and all, even without ABS. Borrowed from 1100, it looks even better. 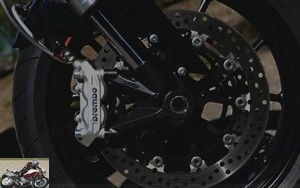 The saddle is in the standard. But the suspensions do their job very well. Suddenly, the irregularities of the road are rather well erased. On the other hand, we can forget the duo. No passenger handle (available as an option, however), a folding seat as a passenger seat, driving and an engine that encourage you to drive nervously, easily transform a trip into torture for the passenger. On the other hand, on the pilot side, it’s at the top ! 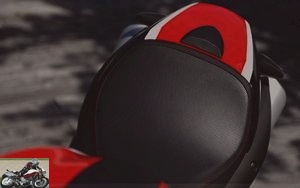 The problem with the Monster is that it encourages nervous driving. Suddenly, consumption is easily placed around 7 liters per hundred. And with a 15-liter tank, it then offers a range of 200 kilometers. 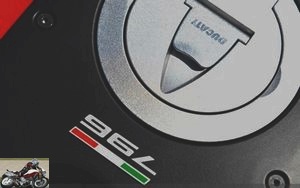 Finally an easy crutch; easy to put on and fold up, and above all offering good footing whatever the terrain, even on slopes.

Note the angled valves to apply pressure; very practical on a daily basis. 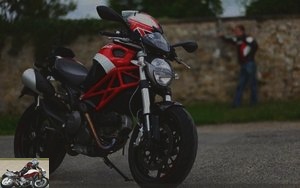 Looks like the Monster 796 is the best of both worlds between a sharp 696 that is always in the red zone, and an 1100 that needs a lot of space to express itself and uncomfortable in the city. The 796, on the other hand, does the splits, comfortable in the city and fun in the great outdoors. Easy to learn, it requires less experience compared to the artillery available in the 750/800 category, even if it is not intended for beginners. At 2,000 euros less than the 1100 and "only" 1,000 euros more than the 696, the 796 seems to have all the qualities not to make you hesitate for a second. But at 8,990 euros, it is still 1,600 euros more than a Z750, with fierce price competition..