Appeared in 2003, the first Multistrada model was designed around an air-cooled Desmodue L-twin engine of 992 cm3 then 1078 cm3 in 2006. Its distinctive design and its roadworthiness had, however, only given it a mixed reception and a career. modest in a sector that is nevertheless dynamic. Often considered too extreme, the Multi underwent a metamorphosis in 2010 and presented itself as a sporty trail GT, carrying a plethora of electronic aids and a breathtaking new Testastretta 11 ° engine of more than 150 hp. 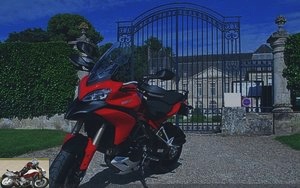 It is, above all, the particularly high level of finish that is reflected in this novelty. Adjustment of elements, quality of materials, surfacing, equipment…. the great Italian thoroughbred is in the lineage of its roadster and sports sisters.

It’s a peak, it’s a cape, no…. It is…. not so bad in real life, that nasal appendage. And, in the end, we do not perceive it quickly anymore. Especially if you opt for a carbon finish…. in S version. 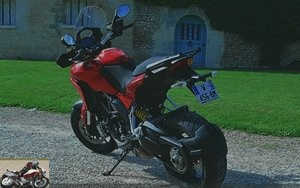 The indicators are integrated into the hand guards: it is better to be seen, but be careful in town for the retro minivans and couriers…. Another appendix, the rear wheel flap reminiscent of a German competitor ….

The standard equipment is rather welcome: two sockets for accessories and Ducati DTC anti-slip system.
This test model is equipped with ABS as well as "DES": Ducati Electronic Suspension, which acts according to 5 different control modes and is adorned with a fork and an Ohlins shock absorber…. as many options as the base model does not include. The shock absorber preload knob is located on the left under the rear buckle. 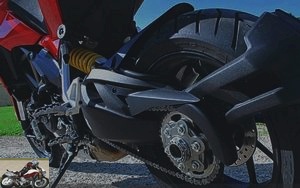 Almost decent space for a modern motorcycle is under the saddle and allows for a small road map or disk block. Anti-theft question, an immobilizer and an electronic Neiman (eh, yes) make sure to keep the beauty in your hands.

The transalpine beauty protects its Testastretta engine, from the 1198, behind an aluminum skid plate. Reworked, the liquid-cooled block has 150 HP at 9,250 revolutions and a maximum torque of 12.1 m / kg available at 7,500 revolutions / minute.

The design is sporty, sharp: finesse of the lights, narrowness of the bubble, taut lines…. there will be sport at the helm of this trail !

Trail? Yes, finally, its height and its name place it in this niche. At 850 mm, the saddle peaks indeed high, especially since it is quite wide … you have to measure a good 1.80 m to perch on it or opt for the basic saddle at the time of purchase (- 25 mm). The position is then more faithful to the spirit of the brand than to the standards of the genre. We have, of course, less the impression of being seated on the tank, as on the Monster, but the pilot is tilted slightly forward, the footrests are a little back and the hands fall on the wide handlebars of such so that, instinctively, we already feel on the attack. The saddle, rather soft with a soft and non-slip coating, is quite short and immediately holds the rider in this dynamic position. The tank, plastic, is narrow and leaves room to "turn around". It promises!

The mirrors with a wide field of view reflect a crisp and efficient image in use. The small screen, with an angular design, is manually adjustable, over a stroke of 60 mm in height using a wheel.

It overlooks a fairly large counter with an all-digital display, composed of two parts: a large trapezoidal surface grouping together a large number of information and functions (tachometer, large engine speed bargraph, gauge bargraph, engine temperature and via a button on the left commodo, overlooking the turn signal, partial mileage and odometer control) and a round dial. In it scrolls by pressing the indicator reminder: traction / suspension mode chosen (Touring, Urban, Enduro, Sport) and by a button under the indicators: odometer, instantaneous consumption, average, outside temperature and elapsed journey time …. can we do more complete? 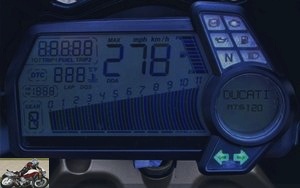 A small, unsecured storage compartment is integrated into the right fairing surrounding the tank. 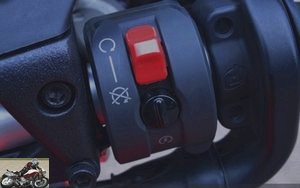 Do not look for or put your card / ignition key, the sesame is on the right-hand stalk: By lowering the red cursor once over the starter button, the dashboard is powered on, which lights up and turns on. initializes into a cute ballet of diodes. We raise the cursor, disengaging the starter and we press…. with a little practice, it’s simple. But why the absence of a contactor but the presence all the same of a key card with a retractable metal tab for the fuel cap? So you always need a key …. 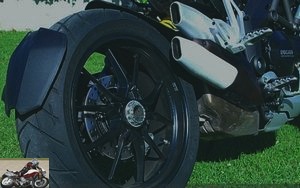 A hesitant cough comes from the starter but the engine suddenly launches into a low growl underlined by the metallic hiss of the desmodromic distribution ….

The magnificent flat flutes of the escapements produce a growl and a powerful breath but, like the famous vuvuzela trumpets, may prove to be a bit painful for some in the long run because they are so sonorous.. 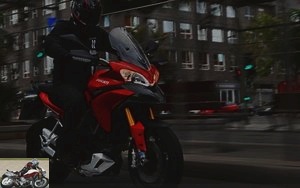 Make sure you stay measured by operating the throttle control (controlled by an electronic Ride by Wire system, allowing you to choose the different riding modes): the heart of the Multistrada 2010 beats hard and fast and your license risks paying the price. his liveliness.

The beautiful walks effortlessly, at ease in traffic. The twin hits under 2,500 revs and is only pleasant if you stay in 3rd gear at best, ie a revs of 3,000 revs and a speed of 50 km / h. The super short turning radius (4.70m) is excellent and improves even when driving at low speed, especially since the beautiful is light with only 220 kilos fully loaded (189 kilos dry).

The controls are soft but the gearbox slams and is not stingy with false dead points (especially between 4th and 5th gear). The inverted fork correctly limits mass transfers during braking. 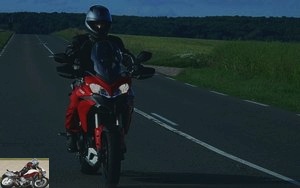 The sharp bubble design gives correct protection to the bust, the upper part of the helmet and shoulder remaining subjected to the air pressure. In case of rain, it is very likely to taste the foot bath, this area being in full air flow.

The bike remains very stable and just needs to pick up speed. This is the problem most often encountered. Injection often gives the impression of hesitating between two regimes: either slowing down or accelerating … anti-pollution system or clamping ?

The position of the arms is more natural due to a less marked spacing than on the BMW R 1200 GS, the handlebars of the Italian being slightly narrower. 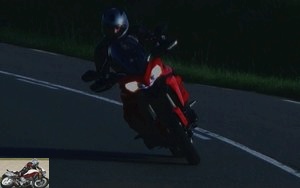 This model finds its playing field here: explosive, almost brutal revivals despite the rather successful clamping at 106 CV. Only the extension is penalized by the castrating regulations. On the last report, we move at 75 km / h at a minimum of 2,500 revolutions and 90 km / h at 3,000 revolutions / minute.

We quickly realize that the position of the pilot seen at a standstill takes on its full meaning here. Wedged against the passenger seat, tilted forward, sporty driving takes over.

Leaping from corner to corner with a screeching howl, lightly squeezing the Italian handlebars and his generous Testastretta heart throbs every moment. This engine is a real treat. Uncommon health boosts this twin on any diet. Only slightly dry reactions of the fork and the shock absorber strain a very correct comfort…. for a Ducati.

The Borgo Panigale firm may well call its toy “all roads”, it is clear that this one is indeed a new GT-supermotard concept. ! 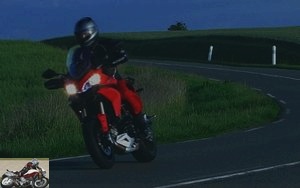 In the "horse-less" version, the transition from one engine mode to another is almost transparent, the Sport mode even seeming less dense. And for good reason, in Urban mode, the power is limited to 100 CV…. activating the Sport profile therefore does nothing at all. The bike seems to perform the best in Touring.

A nice mess at this level because these electronic variants are very convincing in the free world. There you have it, a model that will deserve early release …. 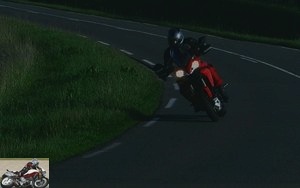 Extremely lively, even incisive, the Multi is designed on a tubular steel trellis frame and rear loop, complemented by forged aluminum side plates. A massive and superb single-sided swingarm in aluminum transmits the aggressiveness of the twin cylinder to the rear wheel.
Particularly rigid, the frame allows precise steering but does not provide the same serenity as a BMW 1200 GS and gives less room for improvisation. Its inverted fork, with a large travel of 170 mm, makes it less alert despite a lesser weight of 12 kg to 189 kg. Another record for a machine of this type.

The Pirelli Scorpion Trail tire fitment is GT sport type and does not allow you to get out of the asphalt. The front looks a bit like a sudden fall. The grip is perfect and the rear flange cash without weakening the exuberant character of the engine. 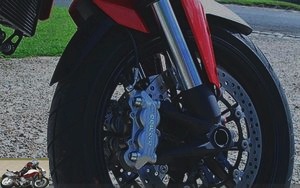 Particularly biting, powerful and enduring, the feeling is very good on dry roads but the original Brembo radial braking will require restraint in the rain and a lot of self-sacrifice for a hypothetical off-road use due to lack of progressiveness.

The rear brake, after a long pedal stroke, turns out to be non-existent. 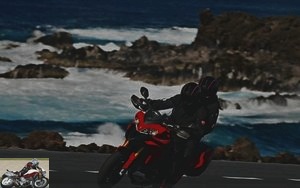 The passenger is at the party: comfortable and non-slippery saddle, optimal leg position, rubber-coated toe clips, efficient suspensions…. a pity when the handle is so angular !

Likewise for the pilot, the comfort of the saddle is tarnished by too marked angles which "cut" the thighs after 200 km.. 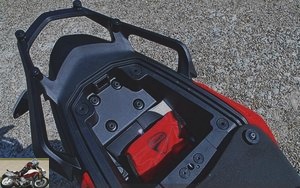 The 20-liter fuel tank provides just under 300 km of range, including the reserve. Quite well, which makes you all the more regret having to possibly stop before because of limited comfort.

The Multistrada 1200 is the most versatile of the Ducati, but cannot be compared to any competitor in the sector (BMW R 1200 GS, Moto Guzzi Stelvio) from which it remains distant both by the absence of real offroad capabilities and by its explosive sporting performance. Only the confidential Moto Morini Grandpasso comes close to this extreme philosophy.

Less exclusive than the other models of the Bologna brand, the trail sport will delight bikers wishing to taste the pleasure of Italian desmodromic twins without suffering the pangs: spartan comfort of roadsters, exclusivity of sports cars. Ducati remains faithful to its know-how by offering a separate machine.

More plush and comfortable than its sister Hypermotarde, more versatile than the Monsters and sporty ballerinas of the Bologna brand, the Multistrada is a GT-superbike to be reserved for experienced riders. Yet designed for travel, it still promises less on this subject than the late road ST3. A Touring version, equipped with side cases, heated grips and central stand fitted as standard, will prove to be more convincing but also more expensive – € 18,900 – than the basic version already at € 14,900. This is "satisfied" with a 50mm diameter Marzocchi inverted fork and a fully adjustable Sachs shock..

For adventurers not too demanding on comfort, for athletes wishing to ride with more ease or transform urban and peri-urban journeys into trips stuffed with fun, the Multistrada remains a favorite purchase, with an advantageous finish and motorization enjoyable. Its plastic is magnetic to passers-by and other road users and many find it "really beautiful".

Fed up with unfortunately little useful electronics once muzzled in France, the transalpine novelty gives a new meaning to versatility: that of driving sometimes an agile roadster in the city, sometimes a high-level sportswoman and, possibly, a fun GT sport, the everything with an inimitable style ….