Dunlop takes the Sport GT class to the next level

1,2,3, the new Roadsmart has arrived. A descendant of the Roadsmart born in 2007 and the Roadsmart II launched in 2012, the new tire claims better handling in the wet, increased longevity and above all extraordinary handling.. Is it possible? To find out, we tested the tire from every angle…. 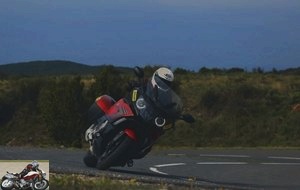 The GT sport segment represents the largest share of the market. Not that he sells so many Honda 800 VFRs that much, but earlier because these tires are universal. They are found on roadsters, on large GTs, on "cross over" (BMW S 1000 XR, Kawa Versys …). A very varied panel of uses and users, which imposes a very wide performance spectrum, in terms of dimensions, loads, temperatures and styles of driving. How and by what means do you achieve the splits at Dunlop? We are going to see him. 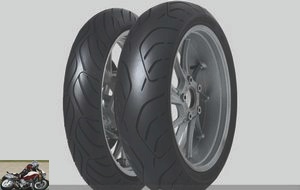 For good longevity, we are regularly advised to eat the Cretan diet with low olive oil, but for tires, the recipe would rather take nanoparticles, these new molecules so small and so promising. As you may have noticed, it is found in all tires now and if performance has jumped dramatically in recent years, it is partly thanks to them. They are small and sturdy. However, that is not enough to make a good tire, you always need a good carcass, plies and a "smart" design (smart in English ….) to evacuate the water, without wearing out quickly or on stairs… 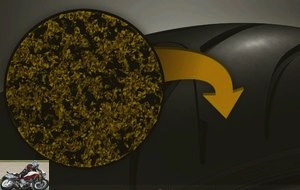 After 4 years of good and loyal service, the Roadsmart II showed shortcomings in the face of competition that did not wait for it to evolve. The status of a tire will soon be assimilated to that of a computer, where one is quickly overwhelmed, barely put on the market. The Roadsmart II wasn’t a bad student, but it no longer had the excellence of the top-of-the-class pushing behind, in terms of handling, or handling in the wet. Even though as at school, the best in maths are not necessarily the best in sport, or in French and with rare exceptions, the good in everything are few..

The Roadsmart II was actually pretty good in sport and endurance, but was losing points in handling..

Endurance and performance usually go hand in hand, as rain and cold weather don’t go hand in hand, with good hot weather. But progress helping, these preconceived ideas will soon no longer apply. To catch up and catch up with the tenors of the category, Dunlop has imagined a new aramid carcass, a fiber obtained from petroleum, lighter than steel with equal strength and which does not fear heat. It contains the expansion of rayon tablecloths, another fiber, this time cellulose-based.

Note that unlike the competition, which uses two plies and adds a third on very heavy motorcycles, Dunlop has put three plies on all its tires and developed an SP (sport) specification for lighter motorcycles, such as Roadsters. The idea was precisely to have a more rigid carcass to limit the deformations which generate wear. The other advantage of a more rigid carcass is the gain in handling since the reaction to a force on the handlebars is not long in coming. And Dunlop will demonstrate it to us at the Mireval test center, near Montpellier.. 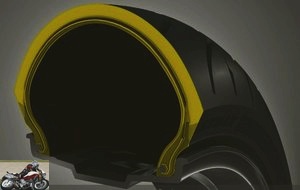 The proof by nine

We had at our disposal two FJR 1300s, one paved in Roadsmart II (RSII) and the other in Roadsmart III (RS III), to make a circuit of handling and avoidance. These machines were equipped with a data acquisition which measured, among other things, the efforts on the handlebars and the speed.

After having done the same route twice, we were invited to see the reality of the numbers. They largely confirm the sensations. With the RSII, you have to constantly maintain an effort on the handlebars to bring the bike where you want.

With the RSIII, it follows the gaze and places itself on its own, without forcing. Thus, in the avoidance maneuver, the torque applied to the handlebars by the pilot drops from 52 Nm with the RSII to 9 Nm with the RSIII! On the large circle that we travel at 70 km / h, the torque goes from 18 to 1 Nm, that is to say nothing … The bike keeps its trajectory without forcing. She obeys the finger, but especially the eye. 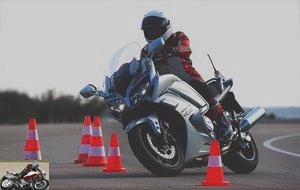 Super-maneuverable, it’s great, but at high speed, it’s still stable? To find out, we tested the tire on the road and also a little on the Mireval circuit, a wonder of the south. Light motorcycle (Yamaha MT-07), heavy motorcycle BMW 1200 RT and K 1600 GT, it’s always the same enchantment, it handles like a bicycle, but it does not flinch at high speed. 190 km / h and the MT 07 keeps the course without moving. On the circuit we were able to do a few laps with BMW R 1200 R, R 1200 GS and S 1000 XR. 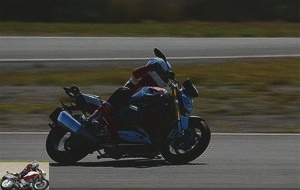 Experience confirms the steering at high speed and the incredible ease of the front tire. The bike is positioned where you look, no problem to keep the trajectories in the difficult sequence at the bottom of the circuit which goes up towards the pits. Confidence is total and we quickly get caught up in the game. But beware, the Roadsmart III is no tracker. By dint of putting on and putting it back on, the rear ends up stalling, not suddenly, while the front remains welded to the track, confirming all the good that we think of him and the confidence that we grant it. Note that this stall occurred in a situation that cannot be found in normal use. I, who have never rubbed an R 1200 GS on the road, went there with a good heart, knees on the ground with my combination of leather and gas full. The rear tire has prevented and forgiven my excesses. It happened, it was beautiful ! 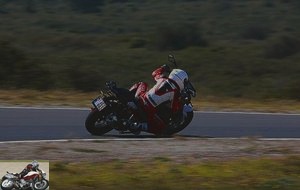 This is probably what you will tell yourself when you open your shutters in the morning, after trying the Roadsmart III in the wet. There the Dunlop teams did a great job and once again, they prove it, by providing us with three GSR 750s, equipped with Michelin Pilot Road IV and Pirelli Angel GT, two references in the wet. The event takes place on a track covered with a thickness of water corresponding to a thunderstorm rain. The kind of situation that would stop bikers under the bridges. 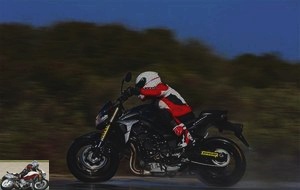 There is always something a little stressful about exercising. But there, very quickly, we are confident. Incredible confidence, because these three accomplices touch on excellence in this field, even if the Pilot Road IV shows the weight of years. The Angel GT and the Roadsmart III are still a cut above, without me being able to decide between them in the space of 2 times five laps.

Anyway, when the checkered flag fell (not us!) The frustration was overwhelming and we would have gladly pushed the issue further. What happiness, we really get off the bike with the banana! Obviously the new “interconnected” designs are devilishly effective. Their degressive section ensures better water evacuation by the venturi effect, which accelerates the flow and the interconnection of the sculptures offers more passage for water to be evacuated quickly. Clearly it works. 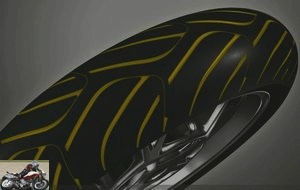 The rubber mixture is also very successful, which responds very well in cold conditions, therefore in water and offers excellent speed for the tire from the first kilometers. Unlike the Roadsmart II which had to reach 50 ° to find its operating temperature, the Roadsmart III is effective from 15 to 20 °.

Note that this is not the outside temperature, but the temperature of the tire which heats up while driving, even in cold weather and even if the temperature rise depends on that of the ambient air and the bitumen. With the Roadsmart III, you are immediately confident, from the first mile. In fact, for our test drive, it was not 5 ° in the morning …. 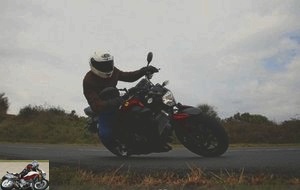 Incredibly manoeuvrable and easy, the new Roadsmart III immediately gives you confidence, with a very rapid warm-up. Tested on cold road with very varied motorcycles (from the MT 07 in SP version, or in BMW RT in normal version), on wet track, or out of its spectrum of use, on dry track under the sun, it gives always satisfaction, proving what he claims. Offered at the price of the Roadsmart II, it shows an increasing quality / price ratio. Suddenly the Roadsmart II goes into "second line" and therefore sees its price drop. There remains his endurance, impossible to demonstrate in a day of driving. Dunlop entrusted this work to the independent laboratory Motorrad test Center. The results of this study seem to show a particularly long life of the front tire, especially on heavy motorcycles (FJR 1300, very voracious in front tire) and a rear well above the average of its competitors. In short, objectively, it will be difficult to fill in the "weak points" box ! 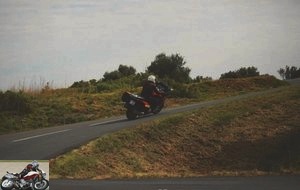