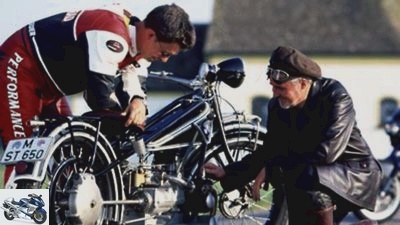 The ancestor of all BMWs, the R 32, was already briskly on the move, with a two-cylinder boxer engine and cardan drive. Genes that have been passed on to this day.

It is a hot summer day, in 1924, when Aloisius Huber toured through idyllic Upper Bavaria in his brand new BMW R 32.

In the midday heat he makes himself comfortable on a bench in the shade of a linden tree and looks at the clear lines of the with pleasure and full of pride as a owner
noble motorcycles. Immediately after its presentation at the Paris Salon in autumn 1923, the two-cylinder, the debut of the Bayerische Motoren Werke, cast a spell over him. But the rampant hyperinflation in Germany makes the boxer a dream even for the well-paid engineer. It cost at the end of 1923, to the height-
point of unprecedented devaluation, one US dollar four trillion marks, the R 32 thousands of trillion, the real-
Wages fell to around 40 percent of their 1914 pre-war level. Generational savings melted away. First the
The introduction of the Rentenmark in November 1923 put an end to the ghost.
Nevertheless, the handcrafted BMW remains a true luxury good. 2200 Reichsmarks ?? as things stand at around 25,000 euros ?? demand the Munich for the two-cylinder, light, Klaxon (horn), pillion seat and speedometer cost extra. But fate means well with Aloisius. His American uncle leaves him considerable cash: Aloisius can fulfill his dream and goes on extensive tours. Like on said hot early summer day.
Suddenly he thinks he sees a strange creature in the shimmering air, which is quickly approaching him. Indeed, it must have come from another planet. He remembers the white bowls, which he thought he had spotted on the horizon while driving, before dismissing them as hallucinations. The creature has a peculiar colorful head and a bizarre shell with funny humps on its elbows, knees and back. His mobile arouses associations
something far away. And suddenly it dawns on Aloisius: It has two wheels,
directly behind each other, and in the middle a unit that is somehow reminiscent of an engine, only the noise it makes doesn’t sound full and characteristic like that of his R 32, but rather subdued, tinny. So it has to be a motorcycle.
Directly in front of him the strange apparition and Aloisius hold his breath. He can’t believe his eyes when it takes off its head. Comes to light
something that looks not at all dissimilar to a human being ?? and articulates itself accordingly. “Hello,” it says. Aloisius can only vaguely guess what that means, but replies politely
he: “Greetings from God.” Again the meaning of the words is not quite clear to him, but he nods gently. “What year of construction?” Asks the stranger and Aloisius replies: “1923.” “Hey, that’s cool, mine is 80 years younger.” Aloisius understands that the stranger is not from this decade, century, or millennium can originate.
In a mixture of excitement and uncertainty, he manages to turn his attention away from the stranger and devote himself to the two-wheeled object on which a white and blue emblem, which is also emblazoned on his BMW, magically attracts his gaze. Is it possible that
this motorcycle comes from this world? Is even a descendant of his own?
He gathered up his courage and asked curiously about the engine of the futuristic vehicle. “Two-cylinder boxer with 1137 cm3 and four valves per cylinder,” lectures the stranger. And the performance? “85 HP, goes a whopping 200 km / h per hour.” Aloisius cannot suppress a “holy cannon barrel”, since that is exactly ten times as many horses as the 8.5 that his R 32 can offer
Has. Unimaginable to master such a devil’s work. Now it suddenly becomes clear to him why the stranger is wearing an aeronaut hood and such an unusual robe. Without protection, it will tear your lungs apart at this speed. Bring it his
R 32 can go up to 90 km / h, if the road conditions allow it.
“And what about the chassis?” “Telelever with brake deflection compensation at the front, single-sided swing arm with Paralever at the rear,” quotes his counterpart. He must have noticed his questioning look, goes into detail. “Dives when braking
the front doesn’t fit, and the suspension responds sensitively and the rear doesn’t stand up when accelerating. “” My front suspension with quarter-elliptical springs can do that too, it works with a progressive characteristic, “Aloisius ventures quietly to object,” and that Heck stays with my motorcycle anyway
always on the same level, so I like to do without a suspension. «The stranger accepts the challenge, goes one better. “Mine has an anti-lock braking system and brake booster, good for deceleration values ​​of one g.” Aloisius explains that his wheels have never locked. The incredibly wide tires are of great interest to him. “What kind of bulky pneumatic does he have there?”
“Radial tires with zero-degree steel belt.” “Do they stick when you run over horse droppings, and how resistant are they to horseshoe nails?” Aloisius asks. Flat tires are the order of the day in the twenties. »Horse droppings? Hoof nails? I don’t know, horses belong in the prairie. «His counterpart is increasingly lacking in understanding. They seem to be speaking from different spheres, and although he risks another derogatory reply, Aloisius asks one last question. “Why does he need the two panoramic mirrors, is the Kradler so vain?” “Rear-view mirror, man, rear-view mirror, so that you can see what is behind you in the traffic
going off. ”This time Aloisius is only thinking his part ?? and is silent. What nonsense. With such a fast-paced motorcycle, you don’t have to worry about what’s behind
happened to one. The front is overtaken.
Suddenly Aloisius is suddenly torn from his dreams and wakes up bathed in sweat. Does it really look like this, the future, or did wild fantasies play a joke in his sleep?
In the distance he still suspects a faint
to hear a tinny sound that slowly fades away. And remind him of it-
nert that he urgently needs to go to buy gasoline. The pharmacy in the next village where the fuel is available will close soon.

80 years of BMW motorcycles mean 80 years of boxer engines. The Bavarians are honoring this anniversary with a limited special series.

BMW celebrates itself and its motorcycles with a special model called R 1150 R Rockster Edition 80, the series was limited to 2003 pieces worldwide. A plaque with an engraved production number and a certificate for the proud owner underline the exclusivity. “The legend of tomorrow,” is how BMW describes this naked bike, painted in black metallic and matt white, rather immodestly. Does the Rockster really have the inimitable charm of a BMW R 32? Posterity may find that in 80 years’ time. In the present, one is definitely pleased with the full equipment of the Edition 80: heated grips and a partially integral ABS are included as standard. The price is correspondingly high: 12,000 euros plus additional costs.