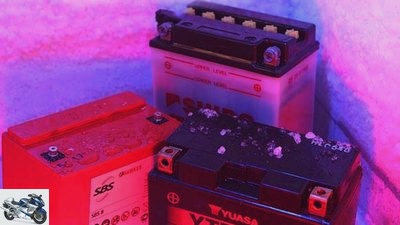 Everything about motorcycle batteries

Nothing would work without the motorcycle battery. Only the small, inconspicuous part, usually found under the seat, breathes life into the bike. But what are the differences, what needs to be considered when buying and maintaining?

There is a lot of tension in the subject.

Because modern motorcycles usually do not have a kick starter, first-class maintenance and care of the starter battery is the order of the day. Now, as an attentive reader of brochures, you say: “The next time my battery died, I wanted to use a maintenance-free type anyway.” But that doesn’t solve all your problems. Because maintenance-free does not mean free of maintenance.

Maintenance-free only refers to the fact that the acid level no longer needs to be checked. In fact, it can no longer be controlled at all. The housing of a maintenance-free battery – recognizable by the abbreviation MF – is not transparent in contrast to conventional lead-acid batteries, and after the first filling with sulfuric acid, the individual cell openings are permanently sealed with plugs. The acid is either absorbed in special glass fiber or fleece mats, other types use silica, which solidifies the battery acid in gel form. For the former type, the designation AGM (Absorbed Glass Mat) can be found on the housing. Gel batteries are currently not that widespread. One manufacturer is Mareg, a subsidiary of Exide, one of the world’s largest battery producers. These gel types have been used in BMW motorcycles, among others, since 2002.

Regular charging is also important for maintenance-free batteries. It is true that MF types store energy better than normal starter batteries during the storage period. But they are also not immune to self-discharge, which is a temperature-dependent, chemical reaction process without connection to a consumer, whereby the frequency is halved compared to standard batteries. A cold location should be selected for longer periods of standstill, as rising temperatures accelerate self-discharge. On average, a starter battery with a capacity of twelve ampere hours (Ah) has already lost a third of its capacity after two months and should then be recharged at the latest.

Due to the high starting currents that MF batteries provide, it is worthwhile to use them despite the high price – compared to the standard type, around 80 euros are due for an average of 80 euros. Where does the better energy yield come from? On the one hand, because the maintenance-free batteries usually have more lead plates in each cell. Michel Urban from the charger manufacturer Tec-Mate illustrates it this way: »Imagine that you cut the thick lead plates of a standard battery into wafer-thin slices like salami. As a result, you can now expose a much larger lead surface to the electrolyte and significantly increase the electrochemical reaction. ”In addition, MF types are provided with higher acid concentrations when they are filled for the first time – this also increases the performance when the starting current is delivered. However, the thin plates are much more fragile and now need better protection. This task is carried out by the glass fiber mats, which not only absorb the electrolyte, but also act as dampers against impacts and vibrations.

Specifying capacity in ampere-hours (Ah) is of little use

The capacity specification in ampere hours (Ah) is of little use with motorcycle batteries. In purely mathematical terms, for example, you can draw four amps of current from a twelve Ah battery for three hours. In relation to the motorcycle, however, this value remains a purely theoretical one. Anyone who sucks a motorcycle battery down to the last drop is doing irreparable damage to it. A capacity specification only makes sense for laptops or mobile phones whose batteries are used cyclically. Specialist author Martin Fischinger (“Motorradelektrik”, Motorbuch Verlag, ISBN 3-613-02405-5) sums it up: “The term is misleading for starter batteries because it suggests that something similar can be done there.”

First and foremost, motorcycle batteries must deliver as high a current as possible when starting. If the engine is running, they go into so-called float mode, in which the alternator charges the battery. In order to be able to effectively assess the performance of the battery, the cold test current would have to be known. How high this is, however, can be elicited from very few manufacturers. There is no obligation to indicate it.

The nominal voltage is discharged with a low current in volts (V)
measured. Twelve-volt motorcycle batteries are six lead-acid cells connected in series. When fully charged, the result is a mathematical value of 12.72 volts, since each cell has a potential difference of 2.12 volts.

The capacity only describes the amount of electricity available from a battery, measured in ampere-hours (Ah). A high one
Ah value is not an indicator of the quality of a starter battery. Much more important is the starting current behavior: That’s right
that, batteries with much smaller capacities can also be used.

The cold test current is a discharge current in amperes (A), which was measured at minus 18 degrees Celsius for a period of ten seconds. The test procedure is regulated in various standards (DIN, EN). Using this value, it is much easier to make a statement about the performance of a motorcycle battery than based on the capacity in Ah. Good specimens deliver 100 to 120 amps.

Structure of a battery