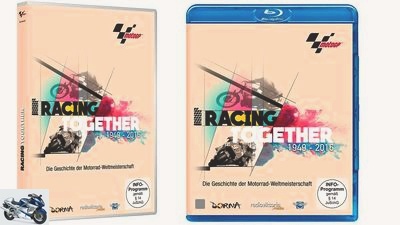 Film Racing Together History of the motorcycle world championship

Racing Together is a film about the history of the motorcycle world championship. “Packed with facts and information that even the most seasoned racing fan will learn something new from.”

Once upon a time, some daring men wanted to find out which of them was the fastest motorcyclist. This is how the story of MotoGP begins. How exactly is described in the film “Racing together” in 120 minutes full of beautiful driving shots, rare film sequences, historical pictures and interviews. The story is nothing less than the history of the sport – from the first races for the world championship in 1949 and the first champion Les Graham to the youngest superstar Marc Márquez. And that is exactly what makes the film so worth seeing, because it documents the development of motorcycles as well as that of sport itself: From the first four-stroke era, the emergence of the two-stroke engine and the decisive role that MZ played in it, through the grandiose 80s and 80s 1990s to the turn of the millennium, when the four-stroke engines were revived.

Of course, the film does not leave out the heroes of the premier class, because the unforgettable John Surtees has a say as well as Giacomo Agostini, King Kenny Roberts, Kevin Schwantz, Wayne Rainey, Wayne Gardner, Mick Doohan or Valentino Rossi – to name just a few to name. The small interview overlays perfectly accompany the story, so that the drivers, technicians and important personalities around the Grand Prix illuminate and make tangible every aspect of this exciting history with their insider knowledge. And of course the legendary duels in over 60 years of Grand Prix Racing are not neglected: Surtees vs. Duke, Agostini vs. Read, Sheene vs. Roberts, Lawson vs. Gardner, Schwantz vs. Rainey, Doohan against himself and Rossi against the rest of the world. Absolutely worth seeing and illuminating.