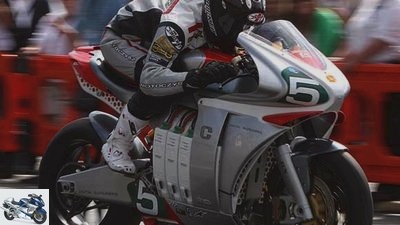 Final: TTXGP on the Isle of Man

Gasoline-powered racing motorcycles have been buzzing on the Isle of Man since 1907. And before even a stone moves on the traditional street course, scouts wear short skirts.

The world’s first emission-free motorcycle race on the island is all the more surprising.

Tuesday 9 June 2009, Isle of Man, 3:47 p.m. SSSSSSSST. With a gentle mix of humming, hissing and whistling sounds, the duo, driver Rob Barber and his single-track vehicle, set in motion. At the start and finish, the commentator holds his microphone very close to the downhill electric motorcycle in order to offer the audience a sound sample via Tourist Trophy Radio (TT radio) and loudspeakers around the 60.7 kilometer long Mountain Course. The perception of speed and race in traditional TT races is very much based on the acoustics. Because a motorcycle with a speed of 300 pounds its way into your senses more than a quick wipe in the corner of your eye. So how does an almost silent vehicle appear on the fastest road circuit in the world? At the Gooseneck, a rather slow uphill bend to the right, the spectators stretch their necks, jump up, and look down in concentration towards the sea and Ramsey. And suddenly it’s there. Faster than most thought possible, the Agni team’s red-painted racing car, a conversion based on a Suzuki GSX-R 750, pushes its way up the mountain under its experienced TT driver. The perceptible noise seems to be a muffled cocktail of baby ICE, wind breeze and forklifts. Barber angles, skids properly and then turns the electric handle again. It disappears from view like a tram gliding away in the city center. The observers remain somewhat confused. The evaluation of the performance does not seem to be easy for them. Some clap, others laugh or giggle.

Historic start of a new era? Or just the bottom stirrup for future technology? After the electrically accelerated Agni rider, ten more e-motorcycles will pass the popular spectator area in the mountains on this day. Agni and Barber clearly set the bar, then it goes sometimes a little, sometimes much slower around the black and white painted street boundary. The Brunel X team at London University just reached the gooseneck with the last twitches. Voltage off, battery empty, speed zero. The long-serving Mountain Course, with its topography and route length alone, represents the toughest test for the youngest racing class. If the teams build on a conventional motorcycle like the GSX-R, machines like the Agni easily weigh 260 kilograms. With energy that can be transported in this way? of 16 kilowatt hours, this corresponds to the energy density of just two liters of fuel. The “rolling cable drums” bring over 200 curves, bumps and kilometers of extreme gradients. to their never-before-explored limits. For example, one of the three engines plopped out of the US team Motoczysz, which was performing with great fuss during the first training session in the Union Mills section. Even maximum future optics and orientation do not seem to protect against classic mechanical loads. The freaky and innovative eRockit team from Berlin can tell you a lot about it. It only comes down the first mountain and then just before the Braddan Bridge left-hand bend. A loud team ?? mechanical design flaw, our fault! ?? ensures a locking wheel and a flying driver. Which leads to eRockit withdrawing from the event because the problem cannot be solved. 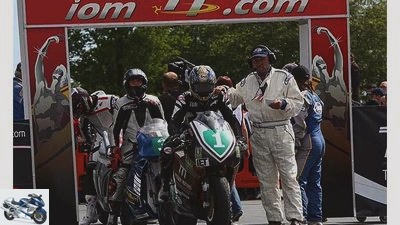 If you call your project a mission, you may be able to start the world’s first emission-free two-wheeler race.

The elderly marshals at the scene of the accident classify with a ?? It ?? s so bizarre! ?? from now on the electrical class as a real devil’s stuff. It doesn’t matter whether it’s mechanics or a cable fire. For the next training session, the marshals lay out the high-voltage gloves provided at the bridge and, in the event of another case, they want to? Activate one of the two prescribed emergency stop switches with a vigorous karate jump towards the motorcycle. After the end of the one-round qualification training in the so-called TTXGP, the inquisitive world of two-wheelers is richer by some information. The professional-looking US teams like Mission Motors and Motoczysz, who launched highly ambitious projects, are not yet able to offer their announced capabilities. Some of the 16 teams present are struggling with the technology so massively that it is not even enough for a training round. Others, on the other hand, shine as impressively as the soldering points on their batteries. Brammo, also from the United States, brings two perfectly constructed, green painted and 168 kilogram heavy e-bikes around the circuit, the aforementioned Agni and ?? not to forget ?? XXL Racing from Kassel. For the TT-experienced driver Thomas Schonfelder with the converted Laverda a splendid start. Above all, the problem-free technology gives the team confidence. Schonfelder provided the necessary TT input for the project, Marko Werner worked for years with the Transrapid, and Thomas Schuricht successfully gained experience with electric kart-based cars as early as the 1980s. A trio with passion, ambition and community funds. The heart of the E-Laverda is the original, more than ten-year-old electric motor from the Audi hybrid project at the time.

In the paddock, the three-phase synchronous motor with its 350 volts and DC voltage remains a unique piece. 80 percent of the teams at the TTXGP use the Indo-English Agni motors with alternating voltage and an alignment to 70 to 120 volts. Team Brammo relies on German technology with Perm units. But Marko Werner names the key to success and the main problem for all teams: Batteries, batteries, batteries! The bad thing is that you can put 20,000 euros on the table and no one will sell you anything! The annual world production of high-performance batteries is simply sold out, and manufacturers have their noses right up there. Via detours, the electrical trio got hold of individual lithium manganese cells, otherwise used in cordless drills and lawnmowers. After days of detailed work with more than 2000 cells and over 100 meters of wire, everything was ready. The reward for the effort: an ultra-stable system that enables the motivated team to have quiet afternoons in the sun, while the competitors struggle with thermal problems, voltage drops and battery management with the conventional lithium polymer high-performance batteries. A so-called balancer is required for the lithium polymer technology, which controls the temperature and regulates the output. The organizer’s safety expert and researcher for alternative drives at Newcastle University, the German Dr. Volker Pickert, states: ?? I don’t discover anything unknown in the paddock, there are still more exciting things in the drawers. In five years, I guess, we’ll see some of this on the street as well. But that is the future.

The presence of the TTXGP is mastered by the Englishman Cedric Lynch from the Agni team. The inventor and chief developer of the Agni engines made in India could easily be described as English quirky. Barefoot, three worn sweaters on top of each other. When he speaks, then very softly and at the same time stretching every word. But he is a Daniel jet engine and develops the winning balancers and high-performance motors. His driver Rob Barber adds:? Cedric is so brilliant, our two engines work great ?? and now he’s helping the Americans himself! I love the Isle of Man, I love my e-bike, and I want to win here! He does it. Wins in front of an overjoyed XXL team and Brammo. Mission in fourth place and Motoczysz with a defect outside. In addition, Barber even breaks a valid lap record from 1967 with an average speed of 140.71 km / h for one race lap: that of the 50 cm³ class. Gentlemen, please charge your engines…